Basel are also into the next stage where the top two in each of the 12 Europa League groups are joined by eight teams dropping out of the Champions League. 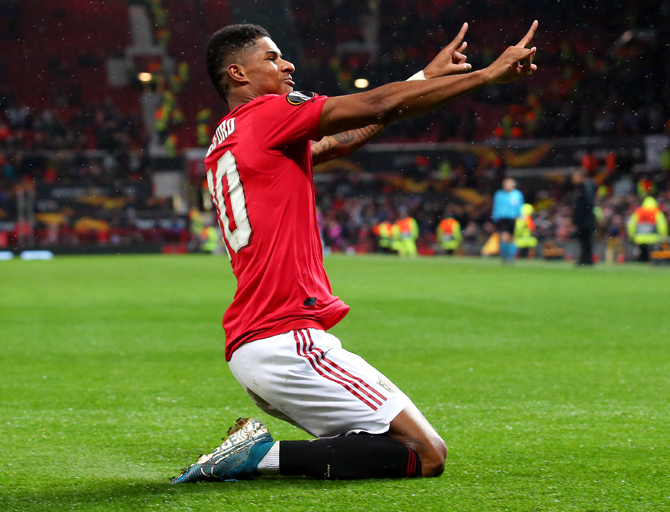 Manchester United, Sevilla and Celtic led a parade of clubs with continental pedigree to book the first places in this season's Europa League knockout stage as they all won on Thursday to reach the last-32.

But while 2017 winners United and Sevilla, who claimed three successive Europa League titles between 2014-16, advanced with ease, it was the Scots who provided the drama as a last-gasp Olivier Ntcham goal handed them a 2-1 win at Lazio.

Basel are also into the next stage where the top two in each of the 12 Europa League groups are joined by eight teams dropping out of the Champions League.

All the qualified teams are through with two games to spare.

Manchester United teenager Mason Greenwood put the three-time European champions ahead versus Partizan Belgrade at Old Trafford and a superb individual goal from Anthony Martial doubled the lead before halftime. 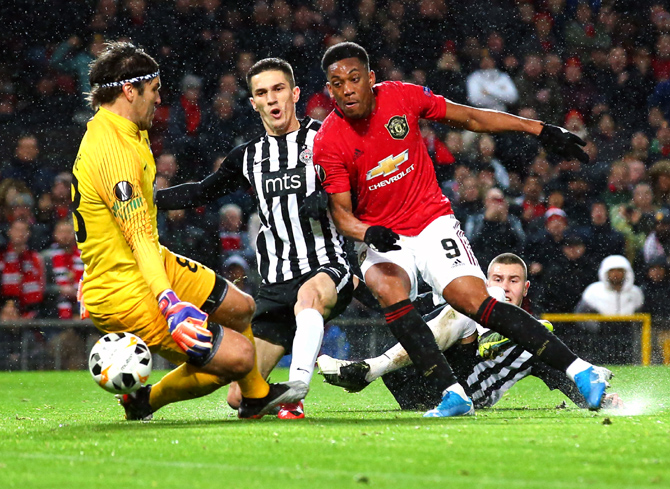 Marcus Rashford also scored with a fine strike in the 49th minute to complete a 3-0 victory in Group L and provide relief for under-fire manager Ole Gunnar Solskjaer.

"We needed a win, but we needed a performance. The boys wanted to go forward, play forward, run forward. They could have had loads more tonight as well. But a pleasing performance, and very important for us to get the points," he told reporters.

United are the only team in this season’s Europa League not to have conceded a goal, even if they gave first choice goalkeeper David de Gea the day off on his 29th birthday.

A hat-trick for Sevilla's Munir El Haddadi was supplemented by two goals from Munas Dabbur in a 5-2 away drubbing of Luxembourg's Dudelange as the Spaniards kept up their 100 percent record in Group A after racing into a 4-0 halftime lead.

Celtic, European champions over a half century ago, advanced from Group E as they fought back to clinch their first victory in Italy, with Frenchman Ntcham chipping oncoming goalkeeper Thomas Strakosha deep in stoppage time for the winner.

"This team keeps setting new boundaries for itself," said ecstatic manager Neil Lennon. "It’s a historic night and to come here and be as good as that and to have qualified after four games is unheard of for Celtic in Europe." 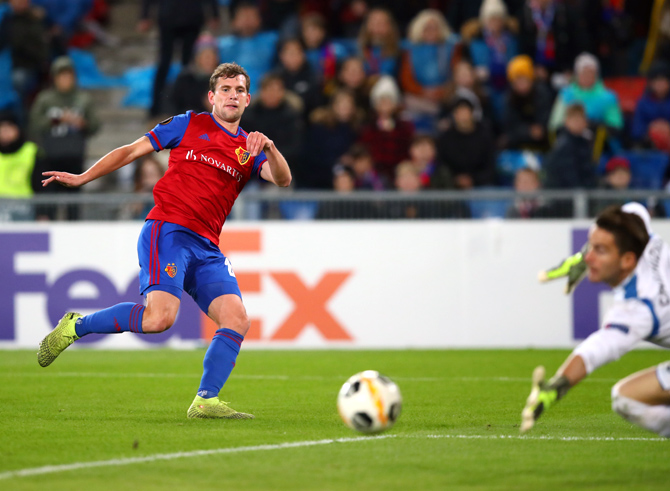 Basel's Fabian Frei scored the winner on the hour mark for the Swiss outfit as they beat visiting Getafe 2-1 to go four points clear in Group C and guarantee a top-two finish.

Paulinho’s first half double set Braga on the way to a 3-1 home win over 10-man Besiktas to keep them top in Group K where Wolverhampton Wanderers missed a penalty and needed a late Raul Jimenez header to win 1-0 against Slovan Bratislava at Molineux.

PSV Eindhoven missed the chance to put their poor domestic form behind them and also qualify for the last-32 as they let an early lead slip at LASK Linz and eventually lost 4-1.

Sporting now top Group D after a 2-0 win at hapless Rosenborg to reach nine points, two more than LASK and PSV. The Norwegians have lost all four of their group games. 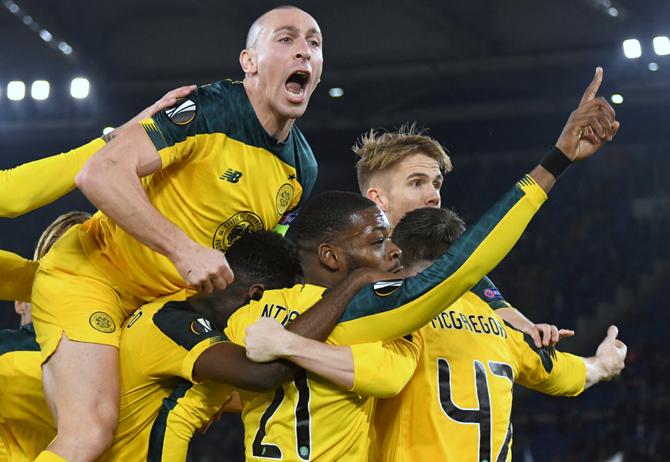 Rangers scored twice in four second-half minutes through Alfredo Morelos and Steven Davis to beat Porto 2-0 at Ibrox in Group G, where they are in second place but level on seven points with Swiss champions Young Boys.

Ghent's 3-1 upset win at VfL Wolfsburg saw the Belgian side go top in Group I, while Espanyol's 6-0 home drubbing of nine-man Ludogorets has them on the cusp of qualifying from Group H.

The penultimate round of group games will be played on November 28.

© Copyright 2020 Reuters Limited. All rights reserved. Republication or redistribution of Reuters content, including by framing or similar means, is expressly prohibited without the prior written consent of Reuters. Reuters shall not be liable for any errors or delays in the content, or for any actions taken in reliance thereon.
Related News: Sevilla, Basel, Manchester United, Europa League, LASK Linz
SHARE THIS STORYCOMMENT
Print this article 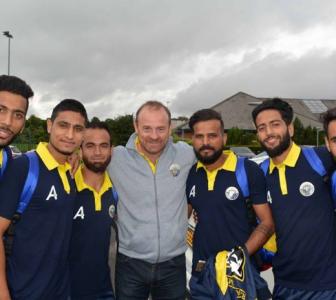 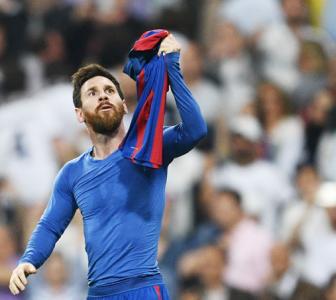 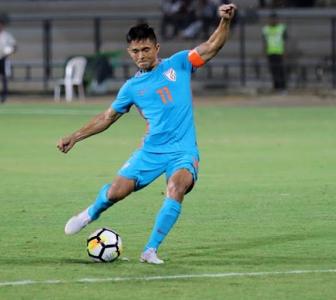 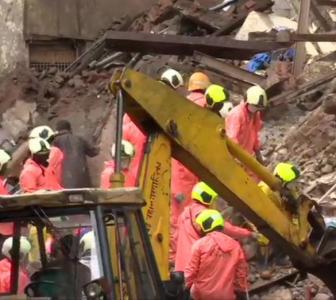 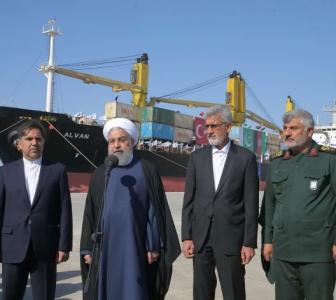 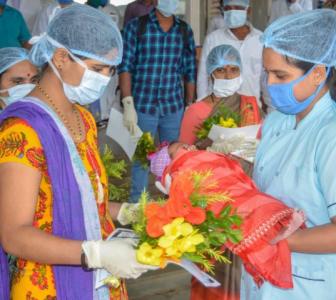 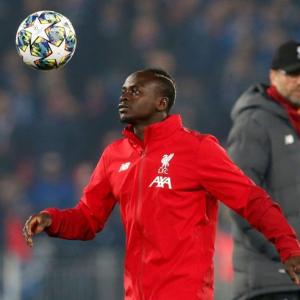 Mane hits back at 'clever' Guardiola for diving claims 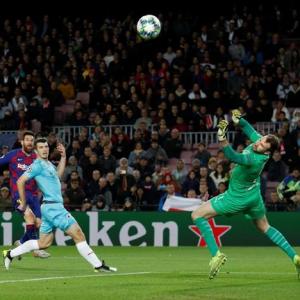