Images from the World Cup qualifying matches played on Monday. 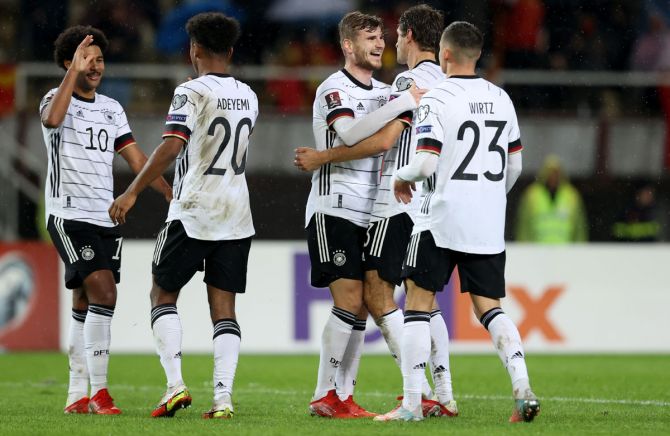 IMAGE: Germany, who were eliminated in the first round of the 2018 World Cup and the last 16 at this year's Euros, became the first European team to qualify for the 2022 World Cup. Photograph: Alex Grimm/Getty Images

Germany became the first European team to qualify for the 2022 World Cup by crushing North Macedonia 4-0 away on Monday to secure top spot in Group J with two games to spare.

A second-half double by Timo Werner and one goal each from Kai Havertz and Jamal Musiala secured Germany's fifth win in their fifth game under new coach Hansi Flick and lifted them to 21 points, with Romania in second place on 13.

All group winners in European qualification automatically secure a place at the tournament in Qatar.

"From the result it was perfect. We got what we wanted, qualified as quickly as possible and we now have five wins in a row," Flick, who succeeded Joachim Loew earlier this year, said.

"Again the attitude was right. Compliments to the team. They did not ease off. The first half was a bit wild and we lacked a bit of precision. But we kept at it. We can be satisfied." 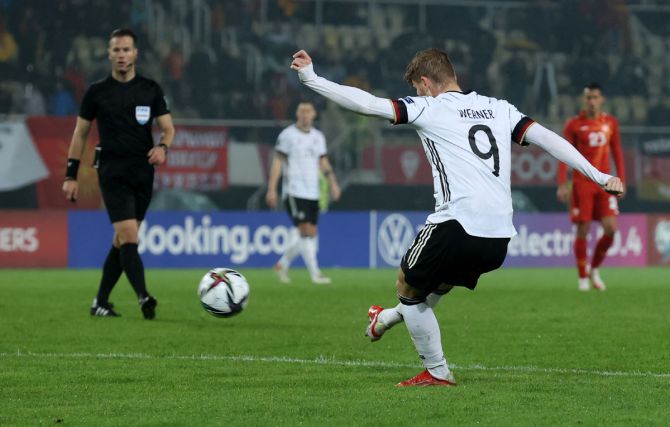 The Germans, who were eliminated in the first round of the 2018 World Cup and the last 16 at this year's Euros, had an early chance with a Thomas Mueller header.

But, as in their 2-1 home win over Romania on Friday, the Germans lacked precision with their final pass and finishing, creating only a handful of chances in the first half until Werner hit the post with a low drive in stoppage time.

Germany, beaten 2-1 by North Macedonia in March, broke the deadlock in the 50th minute when Serge Gnabry split the defence with a superb through ball for Mueller and he laid it off for Havertz to tap in.

Forward Werner then scored twice in three minutes, first drilling in from another Mueller assist in the 70th and then curling a shot home from 15 metres three minutes later.

"It was difficult at the start but it was good we did not concede a goal," Werner, who has now netted in four of the five matches under Flick.

"We know that if we push and attack over 90 minutes then it is only a matter of time until we score. After the lead it was easier for us."

Substitute Musiala completed the victory seven minutes before the end with his first international goal. 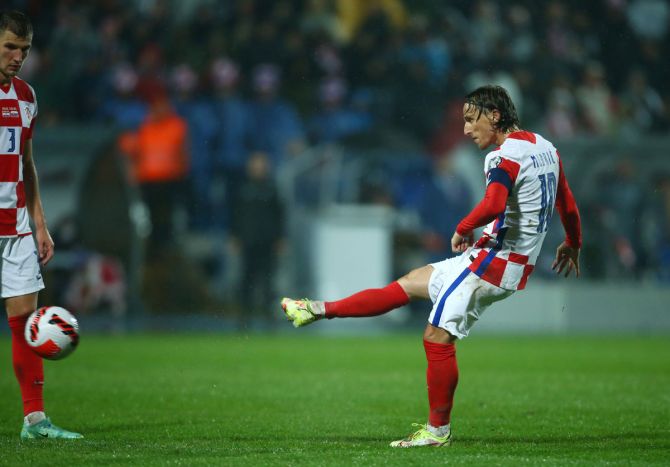 Croatia dented their hopes of qualifying automatically for the 2022 World Cup after a 2-2 home draw with Slovakia in their Group H clash on Monday left them trailing Russia by two points in a two-team race for the top spot.

The Russians, who have 19 points from eight games, beat Slovenia 2-1 away to leapfrog Croatia, who came from behind twice against the Slovakians and had a late goal scrapped after a VAR check.

Both Russia and 2018 World Cup runners-up Croatia are assured of at least a play-off berth as third-placed Slovakia and Slovenia in fourth have 10 points each with no chance of breaking into the top two.

Russia host Cyprus and Croatia visit Malta in the penultimate round of games on Nov.11 before the top two clash three days later in what is likely to be a decisive battle for an automatic berth for next year's tournament in Qatar.

The Croatians dominated the opening half against a rugged Slovakia but were twice caught cold while visiting goalkeeper Marek Rodak pulled off several good saves at the other end.

Winger Ivan Schranz headed the Slovakians into a 20th-minute lead out of the blue as he powered in a delightful Marek Hamsik cross before Andrej Kramaric glanced in the equaliser five minutes later from Luka Modric's corner.

The visitors struck again in the 45th minute through Lukas Haraslin who was given time and space to drill in a shot inside the near post, with Kramaric hitting the woodwork for Croatia on the stroke of halftime.

Modric levelled in the 71st minute with a tame-looking free kick which went in through the wall before substitute Nikola Vlasic was denied a winner in the 83rd as his close-range effort was ruled out for Ivan Perisic's offside in the build-up.

Perisic rued the home team's missed chances and sloppy defending, having acknowledged they had no more room for error.

"The result is unrealistic as we dominated throughout and should have won, but there is no excuse for conceding two soft goals," he told reporters. "It's simple, we have to win the remaining two games to qualify."

Coach Zlatko Dalic said: "We kept a clean sheet in the previous six games and tonight we conceded twice as we switched off at the back, while we missed too many chances.

"We have to move on. It's still in our hands, it will be tough against Russia in the final match but we are hopeful of coming out on top." 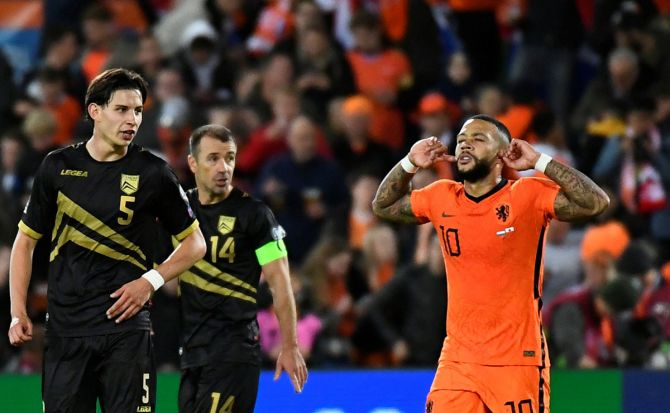 Memphis Depay continued his goal scoring spree for the Netherlands as they thrashed Gibraltar 6-0 to stay on course for automatic World Cup qualification.

Depay scored twice, including one from the penalty spot while squandering another spot kick, to take his goal tally in the World Cup qualifiers to nine -- more than any other player from a European team.

Virgil van Dijk opened the scoring with a header from a Depay corner after nine minutes and there were also second half goals for Denzil Dumfries, Arnaut Danjuma and Donyell Malen.

The result left the Dutch two points ahead of Norway in the Group G standings with two matches left to play. The Netherlands compete their qualifiers next month away against Montenegro and home to Norway.

Depay had a 19th minute penalty saved by Gibraltar debutant Bradley Banda but then made up for it with a tap-in from close range two minutes later before netting his second penalty effort on the stroke of halftime.

It was a fourth win in a row for veteran coach Louis van Gaal, who was brought back to help ensure World Cup qualification after Frank de Boer resigned following the team's Euro 2020 failure. 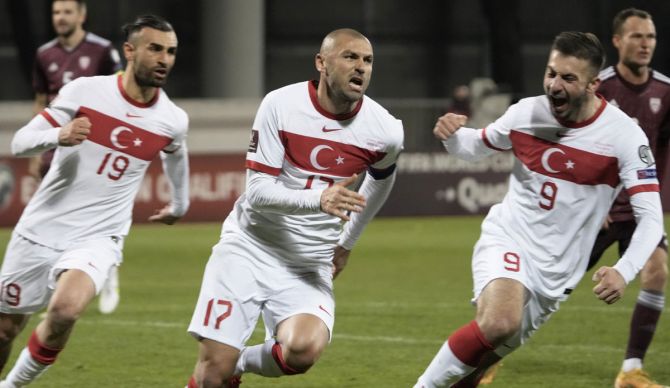 Turkey snatched a 2-1 win against Latvia on Monday as Burak Yilmaz scored from the penalty spot deep into injury time to revive their hopes of qualifying for the 2022 World Cup.

The victory left them four points behind Group G leaders the Netherlands and two points behind Norway with two matches left to play.

Hosts Latvia took the lead in the 70th minute when Turkey's Merih Demiral fired into his own net while attempting to clear a cross from Roberts Savalnieks. Serdar Dursun equalised for Turkey in the 75th minute when he headed in a cross from Cengiz Under.

Turkey dominated possession throughout, with Latvia repeatedly looking to hit back on the counter attack. The hosts looked to have held on until Yilmaz was brought down in the penalty area in the ninth minute of injury time.

After consulting VAR, the referee pointed to the spot and Yilmaz fired the ball into the net to seal victory.

Gudjohnsens make it a family affair in Iceland win

Brothers Sveinn Aron and Andri Gudjohnsen combined for a late goal in Iceland's 4-0 World Cup qualifying Group J win over Liechtenstein on Monday to continue the family's rich goalscoring tradition in the island's national side.

Their father Eidur is the country's joint top scorer with 26 international goals. He came off the bench to replace his father Arnor, who netted 14 goals in 73 internationals, when making his debut in 1996 but the two never played together.

However, his sons got that chance on Monday as older brother Sveinn Aron (23) came on in the 65th minute with the score at 2-0 and the hosts added another with a second penalty for Albert Gudmundsson before Andri (19) joined the fray in the 80th.

Nine minutes later Sveinn teed Andri up to fire home the fourth and final goal of the game but, despite the result and the family's joy, Iceland remain second from bottom of the six-team group on eight points with two games left.