British IndyCar driver Justin Wilson died on Monday after suffering a severe head injury during a wreck in the closing laps of a race the previous day at Pocono Raceway in Pennsylvania, IndyCar officials said. He was 37.

Wilson, a former Formula One driver and seven-time winner in IndyCar racing, had been in critical condition in a coma at a hospital in Allentown, Pennsylvania, before his death.

"This is a monumentally sad day for IndyCar and the motorsports community as a whole," Mark Miles, chief executive officer of Hulman & Co, the parent of IndyCar and Indianapolis Motor Speedway, said in a statement.

"Justin's elite ability to drive a race car was matched by his unwavering kindness, character and humility -- which is what made him one of the most respected members of the paddock," Miles added.

Wilson's family said in a statement that he was a "loving father and devoted husband, as well as a highly competitive racing driver who was respected by his peers".

Wilson was the first IndyCar driver to die following a race accident since fellow Briton, Dan Wheldon, was killed in a fiery crash in Las Vegas in October 2011.

"We are deeply saddened by the passing of Justin Wilson," Wilson's Andretti Autosport team said in a statement.

"He was a tremendous racer, a valuable member of the team and respected representative to our sport.” 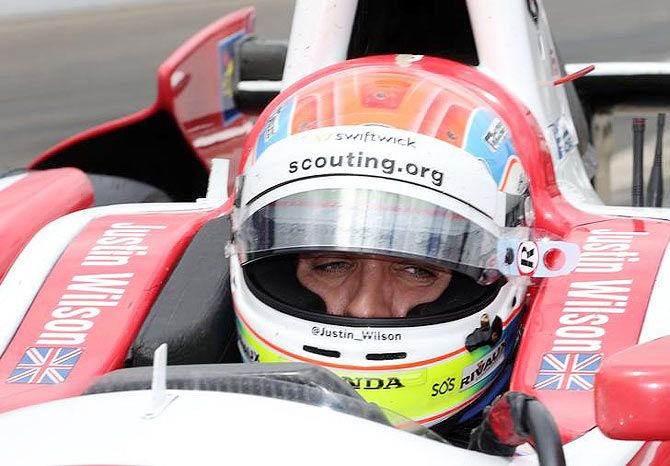 "His life and racing career is a story of class and passion surpassed by none. Our thoughts and prayers remain with the Wilson family and fans worldwide."

Wilson's car careened out of control and into a wall after he was hit by a large piece of debris from the car of Sage Karam on the track in Long Pond, Pennsylvania.

Karam, 20, was leading the penultimate race in the IndyCar Series when his car spun out on lap 179 of the 200-lap race, and smacked the outside wall, sending pieces of the car airborne.

He was taken to the same hospital as Wilson with heel and wrist injuries but was released on Sunday.

Karam will be re-evaluated before being cleared to drive, IndyCar officials said.

"I can't find the proper words to describe the pain and sympathy I feel for Justin and his family," Karam said in a statement on Twitter, followed by the hashtag #RIPJustin.

Wilson's accident was reminiscent of a 2009 incident when Brazil's Felipe Massa was struck in the helmet by a spring from Rubens Barichello's car during qualifying for the Hungarian Grand Prix and had to undergo surgery.

Wilson, a native of Sheffield, England, who lived in Longmont, Colorado, is survived by his wife and two daughters.