Spain scored a stoppage-time equaliser through Jose Luis Gaya to draw 1-1 away to Germany on Thursday in their Nations League opener and first international in almost 10 months due to the COVID-19 pandemic.

Spain had looked set to fail to score for the first time after 40 consecutive games before Gaya sneaked in to score with the last kick of the game. 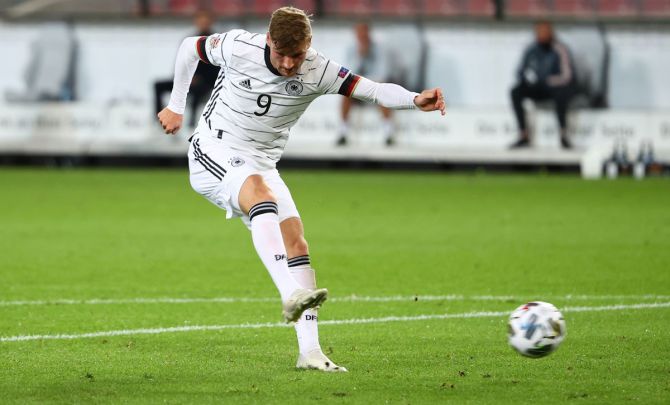 New-look Germany, missing all but one Bayern Munich player and all RB Leipzig's internationals after the Champions League tournament, peppered the game with defensive errors that gave Spain their only two chances in the first half through Rodrigo.

The visitors, playing in coach Luis Enrique's first game in charge since he returned to the role last November, also fielded a much-changed team and the pace dropped off after the break.

Ukraine lead League A Group 4 with three points following a 2-1 win over Switzerland with Germany and Spain on one point. IMAGE: Ansu Fati is the second youngest player ever to debut for Spain since 1936. Photograph: FC Barcelona/Twitter

Youngster Ansu Fati created history when he came off the bench to make his debut for the Spain.

The Barcelona teenager replaced Jesus Navas at half-time to become the second youngest player ever to debut for Spain since 1936.

Fati was 17 years and 309 days when he was called up as substitute.