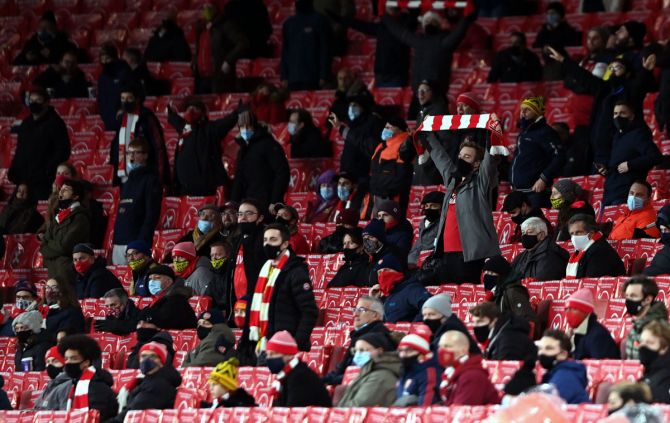 IMAGE: Arsenal fans cheer from the stands during the UEFA Europa League Group B stage match against Rapid Wien at Emirates Stadium in London, on Thursday. Photograph: Mike Hewitt/Getty Images

Arsenal's fans had waited nine long months to return to the club's north London stadium but the 2,000 people sprinkled across the red seats had to wait only nine minutes to enjoy the thrill of celebrating a goal in the flesh again on Thursday.

Appropriately, it was Frenchman Alexandre Lacazette who struck the opener in a 4-1 victory over Rapid Vienna -- the same player who 272 days earlier had scored the winner against West Ham United, days before the COVID-19 pandemic swept in.

Lacazette described it as “amazing” while his team mate Ainsley Maitland-Niles said: “We’ve waited a long time. It’s just great to have that sound back and have our 12th man back.”

While English soccer re-started in June following a three-month hiatus, the country's gleaming Premier League stadiums have since been eerily silent and sad places on match days with fans watching from afar on TV. With the capital placed in the government’s Tier Two restrictions following the end of national lockdown, Arsenal were the first top-flight club to have the opportunity to open the turnstiles to a limited number of fans.

Normally a dead-rubber Europa League group game against such modest opposition, with Christmas looming, might have been an excuse for a night on the sofa or the local shopping centre.

But it felt like a momentous occasion for the lucky few with tickets on a cold and damp north London night.

“I’ve been coming since the Emirates opened (in 2006). It means absolutely everything,” 25-year-old fan Josef told Reuters before kickoff.

“I felt quite emotional on the walk over here -- just the sort of buzz of seeing people back in scarves, back in hats, back in kits. It means the world to be here.”

Another fan Stevan Rowan added: “Since last year there’s been nothing to do. Going to games just makes everything a lot better than what it was.” 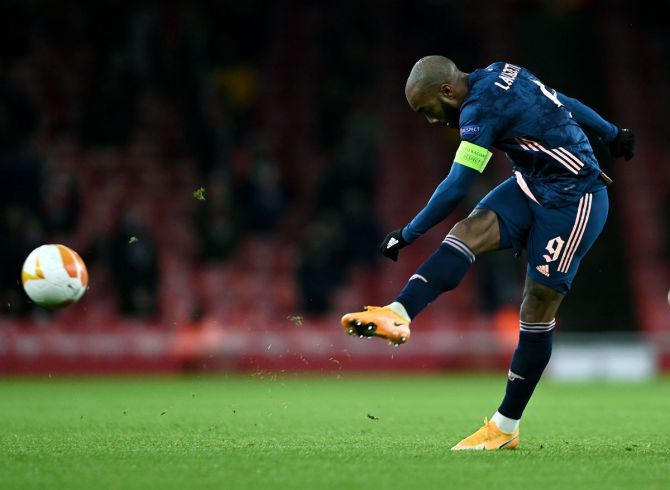 Once inside and socially-distanced in neat lines, most wearing face coverings, it felt like business as usual.

Much-loved mascot Gunnersaurus, threatened with extinction a few months ago because of cost savings, plodded around the touchline and it did not take long for the fans to get their lungs working with a rendition of “We Hate Tottenham”.

Arsenal’s players applauded the fans before kickoff and when Lacazette smashed home his side’s opening goal the whole team joined him on the touchline to milk the applause.

It was music to their ears.

Further goals by Pablo Mari and Eddie Nketiah raised the decibel levels again. Koya Kitagawa pulled one back for Vienna just after the break but there was no recriminations. 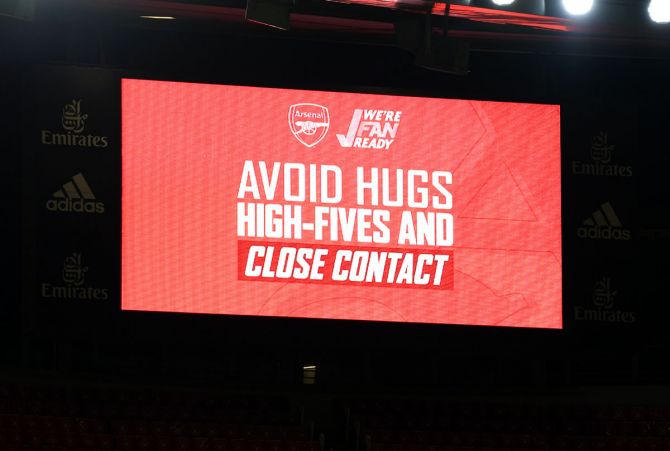 Instead the fans were on their feet again when Emile Smith Rowe rounded off a comfortable Arsenal win which maintained their 100% record in the competition this season.

Hardly any left early and when the final whistle sounded the players showed their appreciation as a semblance of normality returned to their place of work.

“Delighted to have fans back they make a huge difference,” said Arsenal manager Mikel Arteta whose side have lost three successive home Premier League games.

“We had 2,000 but they were loud and they were supportive to the team.”

Arsenal go to north London rivals Tottenham at the weekend when fans will return to some Premier League stadiums.

© Copyright 2021 Reuters Limited. All rights reserved. Republication or redistribution of Reuters content, including by framing or similar means, is expressly prohibited without the prior written consent of Reuters. Reuters shall not be liable for any errors or delays in the content, or for any actions taken in reliance thereon.
Related News: Arsenal, UEFA Europa League Group, Pablo Mari, Alexandre Lacazette, IMAGE
SHARE THIS STORYCOMMENT
Print this article 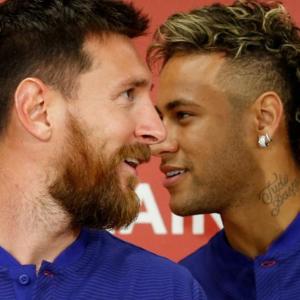 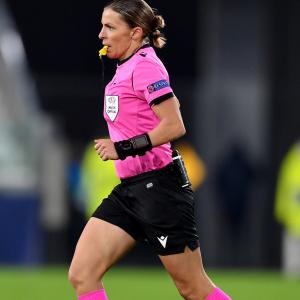