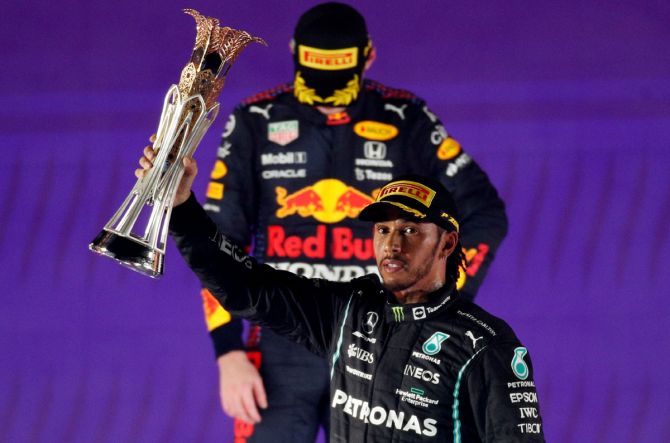 On a chaotic night in Jeddah, the first race in the Gulf kingdom took almost as many twists and turns as an already astonishing and enthralling rollercoaster season -- and also left a bitter aftertaste.

There were crashes and collisions, safety cars, red flags, and claims of dirty driving after seven-times world champion Hamilton hit the back of Verstappen's suddenly slowing car on the super-fast Corniche street circuit. 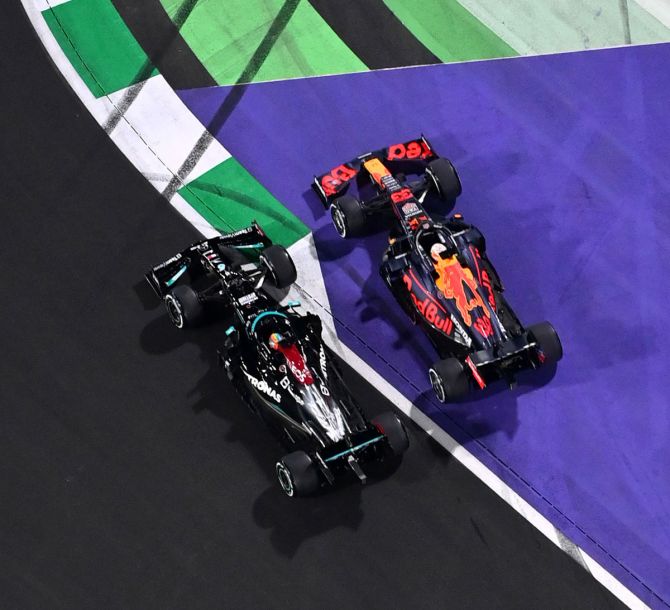 IMAGE: With a bonus point for fastest lap, Lewis Hamilton moved alongside Max Verstappen at the top of the standings with 369.5 points after 21 races. Photograph: Dan Mullan/Getty Images

Extraordinary, at times angry, radio exchanges between the race director Michael Masi and the top two teams filled the airwaves.

With a bonus point for fastest lap, Hamilton moved alongside Verstappen at the top of the standings with 369.5 points after 21 races.

Verstappen, who finished second with Valtteri Bottas third for Mercedes, leads 9-8 on wins, however -- meaning that the Dutch 24-year-old will be champion if neither he nor Hamilton scores another point.

Mercedes extended their lead in the constructors' championship to 28 points and a record eighth successive title looking likely.

The final race is in Abu Dhabi next weekend.

Hamilton had started on pole but twice lost out to Verstappen, who began the day eight points ahead, at the standing re-starts.

The Dutch driver was ordered to hand back the lead, for going wide as Hamilton tried to pass on lap 37, but when he slowed Hamilton ran into the back of him.

"He just brake-tested me. I’ve just hit him, man, my wing’s broken," exclaimed the Briton. "That was dangerous driving dude." IMAGE: Max Verstappen, who finished second, leads 9-8 on wins, however -- meaning that the Dutch 24-year-old will be champion if neither he nor Lewis Hamilton scores another point. Photograph: Dan Mullan/Getty Images

Stewards summoned both drivers after the race and found Verstappen predominantly to blame, handing him a 10 second penalty that changed nothing.

The Dutchman did hand back the lead on lap 42 but took it back immediately.

Stewards then gave him a five-second time penalty for leaving the track and gaining a lasting advantage but Verstappen again let Hamilton through.

"We didn’t need to do that, Max," said his race engineer.

Mercedes told Masi they had not been given sufficient time to inform Hamilton that Verstappen would give back the place, and the Red Bull driver was also furious.

"What happened today is unbelievable and this sport is more about penalties than racing. For me, this is not Formula One," he fumed after being told he had been voted 'Driver of the Day'.

The red flags first came out on lap 14 after a safety car period triggered by Mick Schumacher crashing his Haas.

That played into the hands of Verstappen, who stayed out while Hamilton pitted from the lead for fresh tyres to take advantage of the safety car deployment.

The advantage disappeared, however, when the standing re-start triggered more chaos. Hamilton made the better getaway but Verstappen went off track to keep the lead, with Alpine's Esteban Ocon -- who finished fourth after being pipped by Bottas at the end -- forcing his way into second place.

"I had to avoid a collision there," exclaimed Hamilton. "He (Verstappen) cut across the whole kerb. He just overtook me outside the white line."

Masi offered Red Bull the "opportunity" to line up on the grid for the third standing start behind Hamilton, with Ocon in the lead.

"You'd be back behind Lewis," said the Australian. "That is my offer."

"We accept that," came the reply from Red Bull's team manager Jonathan Wheatley.

Verstappen seized the lead again, with Hamilton passing Ocon, and the battle was on -- punctuated by more virtual safety car periods.

"Get in there Lewis!" Hamilton's race engineer shouted at the chequered flag. "That has got to be the craziest race I can remember, the cool heads won that out."

© Copyright 2022 Reuters Limited. All rights reserved. Republication or redistribution of Reuters content, including by framing or similar means, is expressly prohibited without the prior written consent of Reuters. Reuters shall not be liable for any errors or delays in the content, or for any actions taken in reliance thereon.
Related News: Max Verstappen, Lewis Hamilton, Esteban Ocon, Michael Masi, IMAGE
COMMENT
Print this article 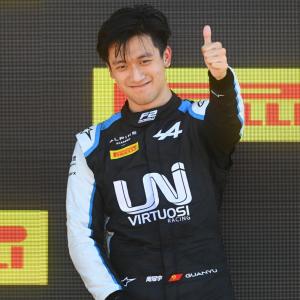