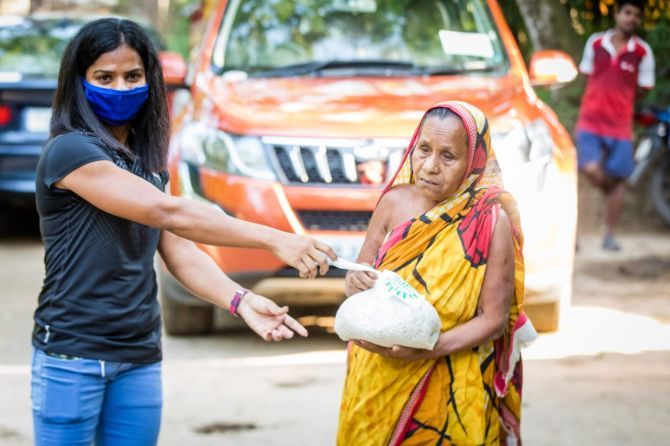 Contributing in the fight against the Coronavirus pandemic, top Indian sprinter Dutee Chand drove down nearly 70 km from Bhubaneswar to her village to distribute food packets.

Dutee took special passes from the authorities in the state capital and drove to her village Chaka Goopalpur in Jajpur district of Odisha.

"This lockdown has hit hard the people in my village and I just wanted to help them in whatever small way I could. So, I took special passes and reached my village on Friday. I distributed food packets to around 1000 people," Dutee, who has now returned to Bhubaneswar, told PTI.

"My family and I had informed the villagers about my visit. People came to my house and I distributed food packets."

The 24-year-old Dutee is now at the Kalinga Institute of Industrial Technology (KIIT) in Bhubaneswar, where she had pursued Business Administration degree.

The athletics track there has been named after her.

"I am planning to go back again and distribute food to the villagers. We have around 5000 people in the village and next time I will take 2000 food packets," she said.

"I approached KIIT founder (and BJD Member of Parliament) Achyuta Samanta for help. I spent Rs 50,000 from my pocket and the rest was arranged by him," she said. IMAGE: Dutee Chand with the food supplies meant to be donated to her villagers. Photograph: Dutee Chand/Twitter

Dutee is yet to qualify for the Tokyo Olympics and the qualification process has been suspended by World Athletics till the end of the year.

She had travelled to Patiala in March for the Olympic qualifiers in the Indian Grand Prix Series but the Coronavirus pandemic had led to the suspension of athletics calendar.

She said the smiling faces of her villagers and the thought of making a small contribution on her part has lessened the anxiety of qualifying for the Olympics.

"Naturally, it would have been better had I qualified for Olympics by now, it is not easy. But I feel better when I see those smiling faces. The older people among the villagers gave me blessings to bring a medal in the Olympics.

"It is not about the money but the satisfaction that I could do something for the society and for my village where I grew up. My parents are also happy with what I am doing."

The Athletics Federation of India is planning to start the season in September and Dutee said she will take part in competitions at the first opportunity. The national events this year will not be Olympic qualifiers, though.

"I am inside the KIIT campus and there is a track inside the campus, so I am using it. But I am not doing training full steam, it is much lesser than the usual training ahead of competitions.

"There is no competition ahead, so I just want to keep myself fit and be ready for an event which may come up. It will help me to be ready, I will not have to start from the scratch once the competitions begin," she concluded.