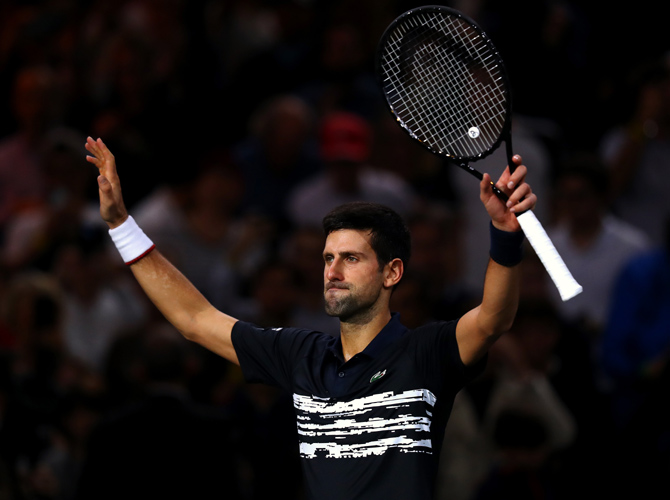 Novak Djokovic destroyed a woeful Stefanos Tsitsipas 6-1, 6-2 to book his place in the semi-finals of the Paris Masters on Friday.

The Serb, who will be supplanted as world number one by Rafael Nadal on Monday, showed no signs of the cold that bothered him in his first two rounds as he produced a brilliant display that lasted less than an hour.

He will next face Bulgarian Grigor Dimitrov, whose solid run at Bercy continued when he saw off Chile's Cristian Garin 6-2, 7-5.

Djokovic, a 16-time Grand Slam champion, raced through the first set and came close to handing Greek seventh seed Tsitsipas a bagel as he set up three set points at 5-0.

Tsitsipas saved them but then surrendered the set with some awful shots.

After securing an early break in the second set, Djokovic did not look back as he avenged his quarter-final loss to the Greek in the quarter-finals of the Shanghai Masters this year. 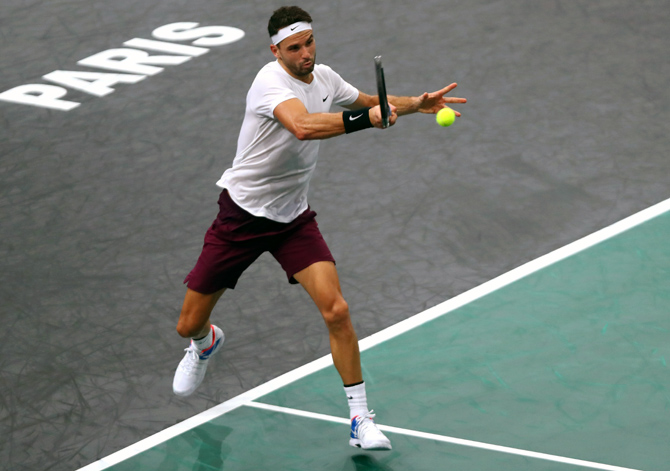 Earlier Dimitrov, who had been struggling since being beaten in the US Open semi-final in September, overcame a second-set wobble to reach the last four.

Dimitrov made a quick start as he broke Garin in his first service game. The Bulgarian bagged the opening set with another break in the eighth game as nerves got the better of Garin who was contesting his first Masters quarter-final.

Dimitrov moved 2-0 up in the second set but Garin hit back with his first break of the match to level for 2-2 and he stole the 28-year-old's serve again to lead 5-4.

Dimitrov, however, broke straight back and wrapped it up on Garin's serve on his first match point.

Later on Friday, France's Gael Monfils will snatch the remaining ticket for the season-ending ATP Finals if he beats Canadian Denis Shapovalov.

Should he fail, Italian Matteo Berrettini, who was eliminated in the second round here, will earn the spot for the Nov. 10-17 event at the O2 in London.

Rafael Nadal takes on local favourite Jo-Wilfried Tsonga in the last match of the day.

Pliskova fights off tenacious Halep to set up Barty showdown 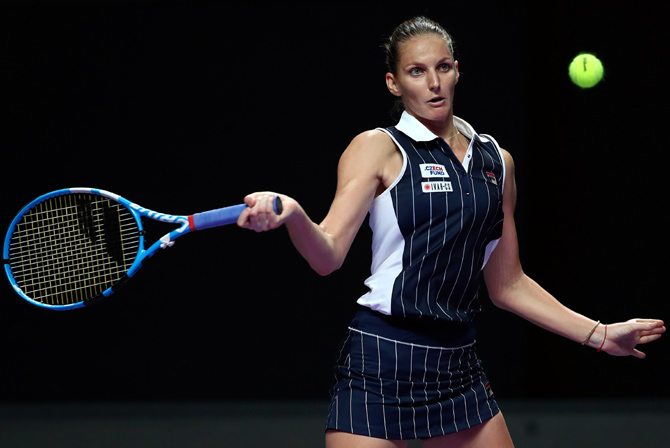 Karolina Pliskova edged a seesaw battle with Simona Halep in their final group match at the WTA Finals on Friday, downing the Romanian 6-0, 2-6, 6-4 to set up a semi-final with world number one Ashleigh Barty.

But Halep showed her trademark tenacity in the second set, breaking the Czech in the opening game before going on to level the scores, firing down an ace to take the match into a deciding set.

The 28-year-old looked to be in control of the third set as she took a 2-0 lead but Pliskova reeled off five straight games - including two breaks of serve - to put herself on the verge of victory.

Halep refused to lie down, however, holding her own serve before picking up another break in the ninth game only for Pliskova to break again, winning the match via a fortuitous net cord.

"Today was a little bit tricky, I was up a set, then down a set and a break and I was just happy to find my way through and to never stop fighting and believing," said Pliskova.

"I was a little but lucky at the end, but happy for that."

Pliskova's win means she faces off against Australian Barty in a clash between the world's top two ranked players.

"We have played so many good matches and she's having a great year so it's going to be super tough," said Pliskova.

"It's going to be a big challenge but I have nothing to lose. She's first and I'm second so she's the one who has to win, so I'm just going to enjoy it."

Earlier, defending champion Elina Svitolina confirmed her place in the semi-finals, where she will meet Belinda Bencic after a hard-fought 7-5, 7-6 (10) win over alternate Sofia Kenin that took two hours and 10 minutes to complete.

Svitolina had already guaranteed a first-place finish in the purple group, although the Ukrainian was made to fight for a third straight win in Shenzhen by the young American, who was drafted into the tournament following Bianca Andreescu's withdrawal through injury.

A succession of double faults undermined Kenin in the opening set but she battled back in the second, pushing the 25-year-old all the way and fighting off five match points before eventually succumbing.

"I'm very, very happy that I finished the match in two sets and it was a very physical match and I had to stay very tough," said Svitolina, who remains on track to claim a maximum prize of $4.75 million.

"I was just trying to be focused on what I had to do on the court and fight for every point.

"Sometimes you don't play your best tennis so you have to fight through the tough moments and the tough games and that's what I was trying to do. I got rewarded a little but in the end and I was playing very solid."