Resurgent Borna Coric powered past fourth seed Stefanos Tsitsipas 7-6 (0) 6-2 to win the Cincinnati Open on Sunday, signalling his return to full fitness from shoulder surgery and showing that he will be a threat at the US Open.

On the comeback trail after undergoing right shoulder surgery last year, Coric returned to the ATP Tour in March and after eight months on the sidelines was back in the winner's circle claiming the biggest title of his career.

Ranked 152 and in the tournament via a protected ranking, Coric capped a remarkable week, that included a second round victory over Rafael Nadal, with a brilliant final that no doubt marks the 25-year-old Croatian as a dark horse contender when play gets underway at Flushing Meadows on Aug. 29.

The title was the third of Coric's career but his first since 2018 and will see him jump up the rankings to world number 29 on Monday and seeded at the US Open.

"I didn't believe I was going to win the tournament," Coric told a news conference after his victory.

"I never look too much forward.

"When I was in the semi-finals, obviously I know who I'm going to play in the final, because it's not many matches. But in the first couple of rounds, I'm not really focused on the next round.

"I'm always focused on the round which I'm playing right now. I was just believing that I can win the next match. That's what I did for five days in a row."

Coming off a semi-final win over world number one Daniil Medvedev, Tsitsipas carried some of that momentum into the final, breaking Coric at the first opportunity on way to a 4-1 lead.

That break would be the one and only for Tsitsipas as Coric would dig in taking the fight to the Greek.

Coric would get back on level terms breaking back at 4-3 as the opening set continued to a tie-break.

Tsitsipas would double fault on the first point of the tie-break and never recover, Coric accepting the gift and winning 7-0.

Coric kept the world number seven under pressure in the second, Tsitsipas finally cracking with a double-fault to hand Coric another break and a 4-3 lead.

With dark storm clouds gathering Coric moved to end the match, holding and then breaking Tsitsipas again to close out the match.

"I think he was serving well," Tsitsipas told reporters. "He was making me move a lot.

"I could have used my chances in the first set. I don't know why I didn't. I rushed a little bit.

"He had a few good returns, and it cost me because that first set could have been very life-changing."

Caroline Garcia capped a long week by beating Petra Kvitova 6-2 6-4 to claim the Cincinnati Open title on Sunday and become the first qualifier to win a WTA Tour 1000 tournament.

After battling through qualifying, Garcia beat three top-10 world-ranked opponents, Maria Sakkari, Aryna Sabalenka and Jessica Pegula, on the way to the final where she delivered a master class against Czech Kvitova, the twice Wimbledon champion.

Leading the WTA Tour in aces and second in break points saved, the 28-year-old Frenchwoman relied on her big weapons to clinch her third title of the season, sending down 11 aces and saving all eight break points she faced.

Since coming back from a foot injury in May, Garcia has won three events on three different surfaces, on clay in Warsaw, where she beat world number one Iga Swiatek, grass in Bad Homburg and hardcourt in Cincinnati.

"I don't know how to describe that week because I came here on Wednesday night to get ready for quallies," said Garcia.

"Just trying to find my rhythm, to feel better, to get the body healthy and to adapt to the hard court.

"I didn't play on hard since Miami, so I was not that confident when I arrived.

"Every match every day was a new day, new challenge."

Under threatening skies Garcia got out to fast start with a break helped by a pair of double faults by Kvitova, as the 32-year-old once again struggled with her serve.

In her semi-final she served three double faults in the opening game to gift Madison Keys an early break before fighting back for a three sets win.

But there would be no escape against Garcia who piled on the pressure with a second break to sweep the opening four games.

Garcia carried on in the second set as she again broke Kvitova at the first opportunity and held for a quick 2-0 lead when Kvitova called for a medical time-out.

Kvitova returned to the court with no noticeable strapping but Garcia was not be distracted, holding serve the rest of the way to clinch her 10th career title.

"There was a song, "The Girl is on Fire," right? I was, like, this is the best description of her (Garcia)," said Kvitova. "I think she is kind of the player who can beat everybody.

"It's my own experience. I think that when she is on, she is on.

"We saw it whole tournament this week." 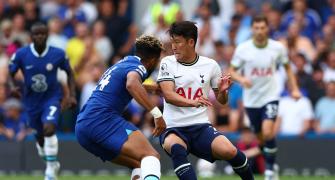 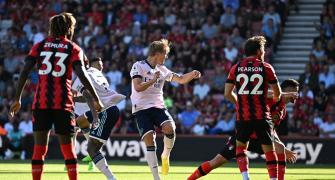 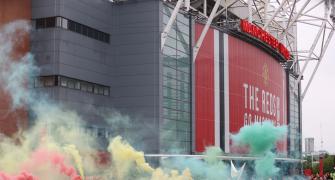 Give Liverpool full points if United tie is off: Klopp 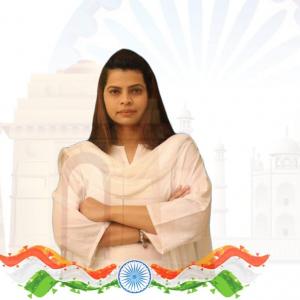 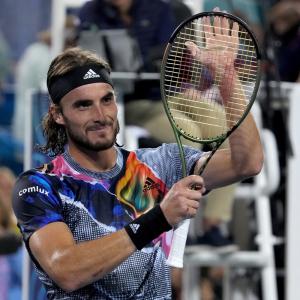