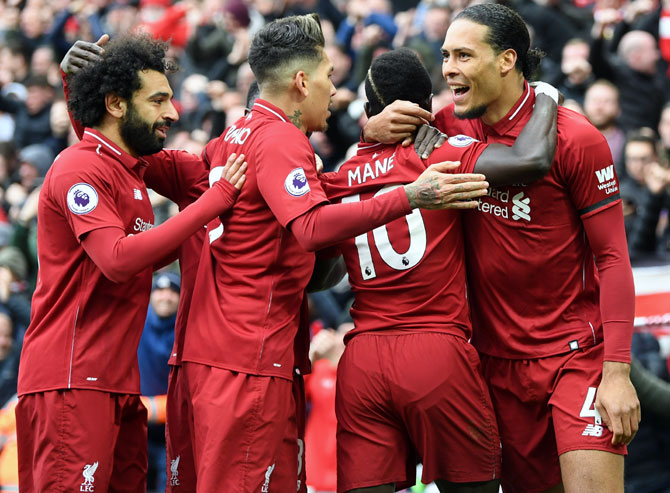 A spectacular strike from Mohamed Salah helped Liverpool maintain their two point lead over Manchester City in the Premier League title race with a crucial 2-0 win over Chelsea at Anfield on Sunday.

City won 3-1 at Crystal Palace earlier on Sunday meaning Liverpool have 85 points with four games to go and City are on 83 with an additional match to play.

But with Pep Guardiola's side having to face Tottenham and Manchester United in the next 10 days and Liverpool having no more matches against top six teams, Juergen Klopp's side have a glorious chance to end their club's 29-year wait for a domestic league title.

After a fascinatingly even first half, Liverpool turned on the style after the break with a 51st minute header from Sadio Mane and then a long-range screamer from Salah two minutes later blowing Chelsea away.

"I’m so proud of the team, it was a fantastic performance," said Klopp.

"What a team, what a stadium, what an atmosphere. I’m so thankful I can be a part of this, it’s great. It’s just outstanding, very overwhelming at times," said the German. 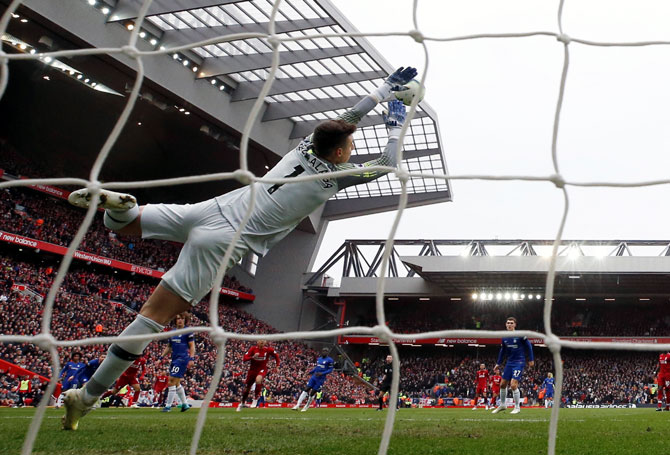 Although the brilliant Eden Hazard hit the post for the visitors, there was a real determination about the way Liverpool approached the second half -- closing down across the field and yet still pushing forward in search of a third to totally kill the game.

That did not come but with only lowly Cardiff City, relegated Huddersfield Town, Newcastle United and Wolves remaining as hurdles, this was the biggest obstacle in Liverpool's run in, cleared with some margin to spare.

Hazard, playing in a central role, had been a constant threat in the opening half while Liverpool's cutting edge was not quite there. Mane went close with a curling effort and a Firmino toe poke forced Chelsea keeper Kepa Arrizabalaga into action.

Chelsea had arguably had the better of the opening half but whatever Klopp said to his team at the break certainly had the desired effect.

The breakthrough came when Salah weaved into the area, putting the Chelsea defence on the back foot and Henderson picked out Mane at the back post with the Senegalese forward confidently heading home.

If that goal brought a feeling of relief, it was pure joy two minutes later when Salah scored a sensational second -- the Egyptian receiving the ball on the right flank and cutting inside before unleashing an unstoppable drive from 25 metres out into the far, top corner.

The pressure is on City ahead of 10 days which could determine the outcome of this fascinating title race.

Ten-man PSG humiliated at Lille, made to wait for title 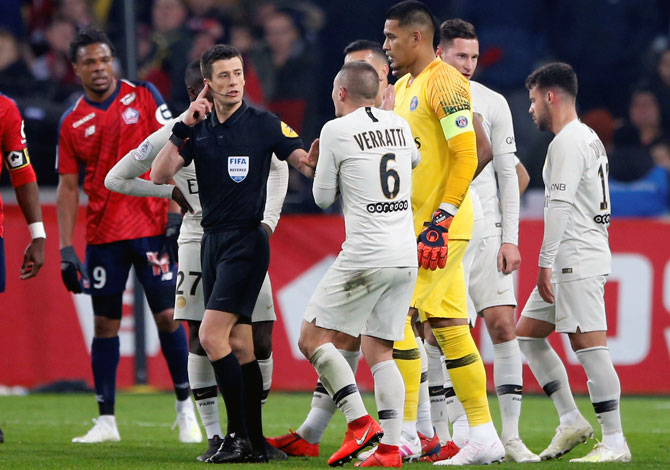 Paris St Germain's Ligue 1 title celebrations were delayed again when they suffered an embarrassing 5-1 defeat by second-placed Lille after being reduced to 10 men on Sunday.

The capital side, who would have clinched their eighth title by avoiding defeat, had Juan Bernat sent off before the break after the Spaniard had cancelled out Thomas Meunier's early own goal.

The hosts made the most of their superiority after halftime with goals by Nicolas Pepe, Jonathan Bamba, Gabriel Magalhaes and Jose Fonte, reducing the gap with the leaders to 17 points with six games remaining.

PSG, who already missed out on the opportunity of an early celebration when they drew at home to Racing Strasbourg last Sunday, will bag the title if they win their game in hand at Nantes on Wednesday.

It was PSG's heaviest league defeat since Qatar Sports Investment (QSI) took over the club in 2011.

The game got off to an eventful start with Kylian Mbappe having two goals disallowed for offside in the first 15 minutes and PSG losing Thiago Silva to a muscle injury two weeks before the French Cup final against Stade Rennes.

Lille went ahead after Meunier diverted a Jonathan Ikone cross into his own goal in the seventh minute.

However, the Spanish full back was shown a straight red card shortly before the break when he brought down Pepe as the striker was rushing towards goal.

Christophe Galtier's side went 2-1 up six minutes into the second half when Pepe beat the offside trap to score from close range.

Mbappe tormented the Lille defence but he was isolated up front and it was Lille who scored another, in the 65th when Bamba out-paced the defence and beat goalkeeper Alphonse Areola.

Magalhaes and Fonte sealed an emphatic win for Lille with a header each in the 72nd and 84th minutes, respectively. 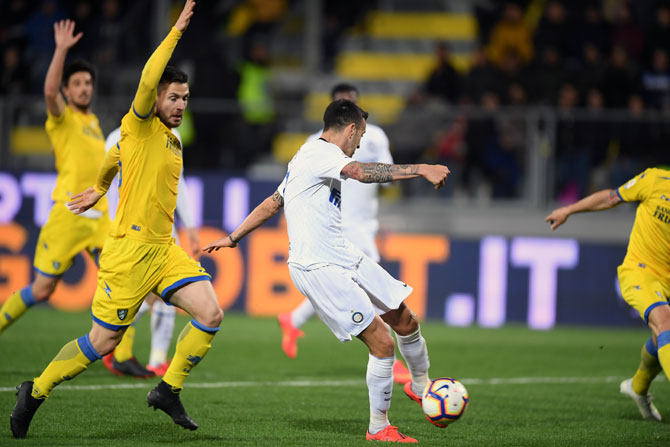 Inter Milan recorded a 3-1 win away at relegation battling Frosinone on Sunday to strengthen their grip on third place in Serie A.

Luciano Spalletti's side were under pressure to deliver a result in order to avoid being dragged into a tight race for Champions League qualification, after AS Roma and AC Milan won on Saturday.

A header from Radja Nainggolan and an Ivan Perisic penalty in the first half put Inter in control before Francesco Cassata pulled one back for Frosinone as they improved after the break.

However, Matias Vecino's stoppage-time strike sealed a win that keeps the visitors five points clear of Milan in fourth place with six rounds remaining in the league season.

But Inter coach Spalletti had concerns about his team's failure to kill the game off until the last few minutes.

"We saw that the moment we feel remotely safe or comfortable, we can run into a devastating setback," he said to Sky Sports Italia.

"It happens to everyone, but probably more to Inter. When you think it's all in hand, rather than finish it off, you get timid and soft.

"Frosinone had nothing to lose, so their only objective was to impress and get a great result in an important fixture. A defeat won't make much difference to them at this point." 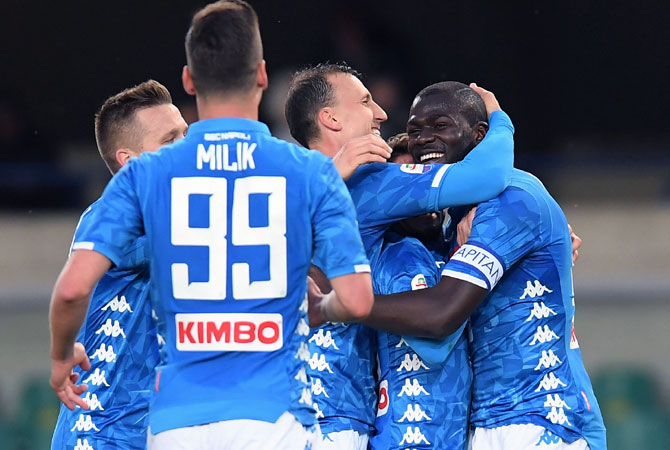 Napoli postponed Juventus's march to the Serie A title and consigned Chievo to relegation with a 3-1 win at the Stadio Bentegodi on Sunday.

Carlo Ancelotti's side needed a victory to ensure that the Turin club, who lost 2-1 at SPAL on Saturday, would not wrap up their eighth consecutive league championship with a record six games to spare.

Two goals from Kalidou Koulibaly either side of an Arkadiusz Milik strike confirmed Chievo's demotion despite Bostjan Cesar's late consolation, after a miserable season in which the Verona club have recorded just one win in 32 games.

The result leaves second-placed Napoli on 67 points, 17 behind runaway leaders Juventus on 84.

Juve can secure the title by avoiding defeat at home to Fiorentina next weekend.

Valencia stayed in the hunt for the final Champions League qualifying spot in La Liga with a rampant 3-1 win in a city derby at home to Levante on Sunday.

Scarred by defeat by struggling Rayo Vallecano last weekend yet buoyed by victory in their Europa League quarter-final first leg over Villarreal, Marcelino's side got off to a flying start with a headed goal from Santi Mina in the second minute.

They lost defender Cristiano Piccini to a serious injury later in the first half and Levante equalised against the run of play in the 56th minute when Valencia's Carlos Soler clumsily diverted a corner into his own net.

Valencia's record signing Goncalo Guedes immediately restored the home side's lead down the other end by lashing into the far corner, while Mina scored a tap-in six minutes later to seal the three points.

Valencia are sixth in the standings after 32 games on 49 points, two behind fifth-placed Getafe who drew 2-2 at Valladolid and three back from Sevilla, who occupy fourth spot after beating Real Betis 3-2 on Saturday.

© Copyright 2020 Reuters Limited. All rights reserved. Republication or redistribution of Reuters content, including by framing or similar means, is expressly prohibited without the prior written consent of Reuters. Reuters shall not be liable for any errors or delays in the content, or for any actions taken in reliance thereon.
Related News: Chelsea, Lille, Liverpool, Napoli, Mohamed Salah
SHARE THIS STORYCOMMENT
Print this article