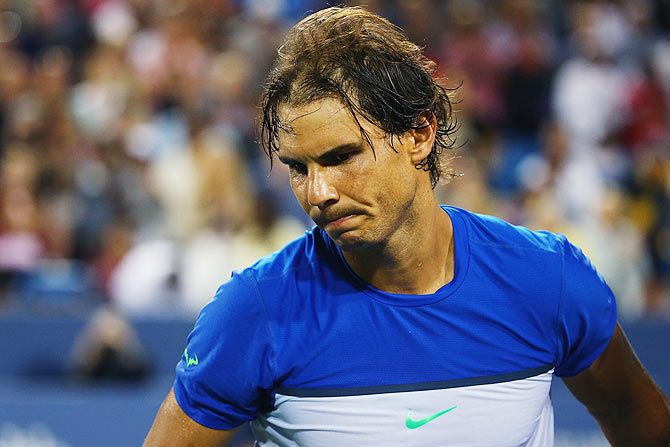 Spain's Rafael Nadal reacts after losing his match against compatriot Feliciano Lopez in round 3 of the Western & Southern Open at the Lindner Family Tennis Center in Cincinnati on Thursday. Photograph: Maddie Meyer/Getty Images

Defending champion Roger Federer cruised into the quarter-finals of the Western & Southern Open with a 6-1, 6-1 demolition of South African Kevin Anderson on Thursday on an otherwise tough day for the top seeds that saw Rafael Nadal eliminated.

Swiss second seed Federer needed just 55 minutes to register his easy win but top seed Novak Djokovic, third seed Andy Murray and fifth seed Stan Wawrinka were all taken the distance in their matches at the US Open warm-up event in Cincinnati.

Playing in his first tournament since losing the Wimbledon final to Djokovic last month, Federer looks fresh and rested and advanced to a last eight encounter against Spain's Feliciano Lopez, who upset 2013 Cincinnati champion Nadal 5-7, 6-4, 7-6(3). 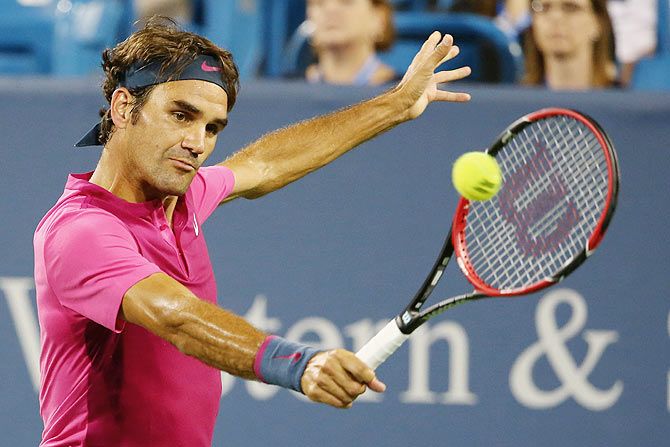 "I think the first break always gives you a bit of a boost and right then I felt conditions weren't that fast and I could probably get some more balls back than maybe a day session," Federer said.

"Then it was just important to keep it up with my serving. I did that very well tonight, so I am really pleased it was a rock solid performance.

"It's only quarter-finals, I know it's a good result so far and I'm playing great tennis but hopefully I can keep it up tomorrow."

Djokovic looked in danger when he dropped the opening three games of the final set against 13th-seeded Belgian David Goffin, but roared back for a 6-2, 2-6, 6-3 win to set up a French Open final rematch against Stanislas Wawrinka.

The Serbian world number one ran into trouble when his 24-year-old opponent broke in the first game of the second set, which resulted in a frustrated Djokovic destroying his racket with three smashes against the hard court. 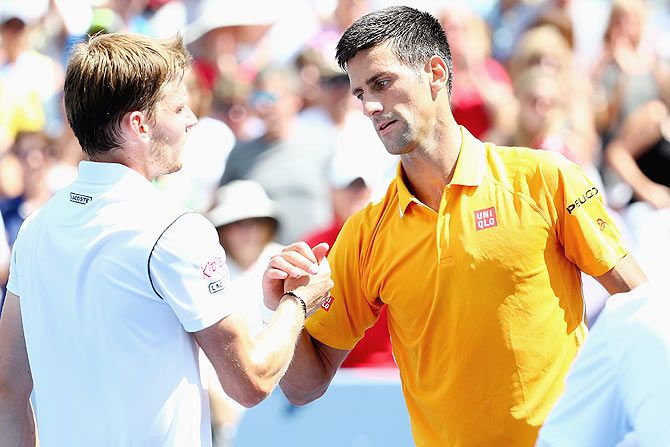 Goffin went on to win eight of the next 10 games to put himself in position for a massive upset but Djokovic found his groove in time to prevail.

"Credit to him for playing some solid, consistent tennis, always making me play an extra shot," Djokovic said.

"Luckily for me, I managed to bounce back, dig myself out of this hole I was in."

Djokovic and Wawrinka will meet for the 22nd time on Friday, but it will be their first clash since the Swiss triumphed at Roland Garros in June.

Wawrinka was also forced to dig deep in his third round clash where big-serving Karlovic fired 35 aces to his opponent's eight, but the Croatian's biggest weapon faltered when he needed it most as he double faulted while serving to save match point.

"It's going to be the first time we've met (since) the French Open final," Djokovic said about his next opponent. "Both of us, we are still not playing our best, but hopefully we can rise to the occasion and have a good match." 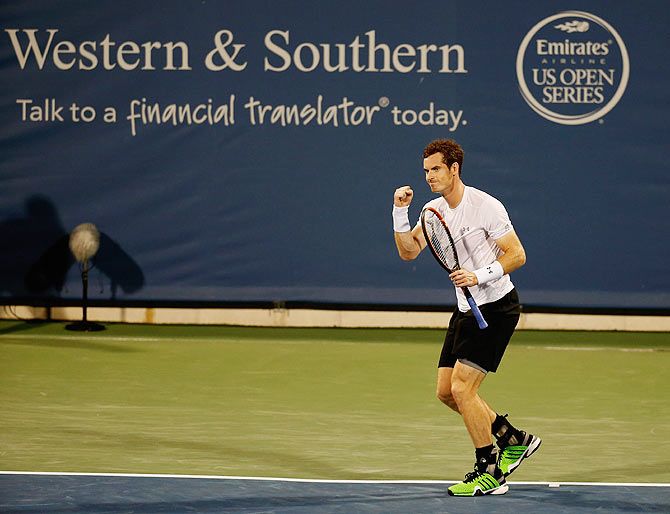 Murray, who won the Rogers Cup in Montreal on Sunday, looked a little jaded after a tough two weeks but the Briton somehow recovered to beat Grigor Dimitrov 4-6, 7-6(3), 7-5 in a little under three hours after twice looking to be headed for defeat.

Trailing 5-2 in the deciding set after also being 4-1 down in the second, Murray, who rose to number two in the world rankings on Monday, dug deep into his resources to rally for a victory that sets up a quarter-final against Richard Gasquet.

Sixth seed Tomas Berdych of Czech Republic breezed by unseeded Tommy Robredo of Spain 6-0, 6-1. He will meet Alexandr Dolgopolov in the quarter-finals after the Ukrainian qualifier dispatched Jerzy Janowicz of Poland 6-3, 3-6, 6-4. 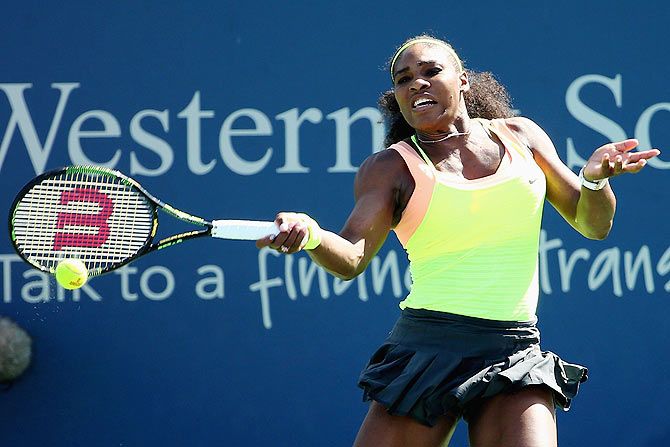 Defending champion Serena Williams cruised into the quarter-finals of the Western & Southern Open with a 6-0, 6-2 win over Italy's Karin Knapp on Thursday while Swiss teenager Belinda Bencic's remarkable run came to an end.

Williams, who was upset by Bencic last week in the semi-finals of the Rogers Cup in Toronto, needed 54 minutes to get by Knapp and set up a showdown with Serbian Ana Ivanovic in what will be a rematch of last year's final.

"When you've done well somewhere it gives you confidence and also takes pressure off," said Williams, who has won 41 straight matches on U.S. hardcourts since losing to Victoria Azarenka in the 2013 Cincinnati final.

"Playing at home in America is great." 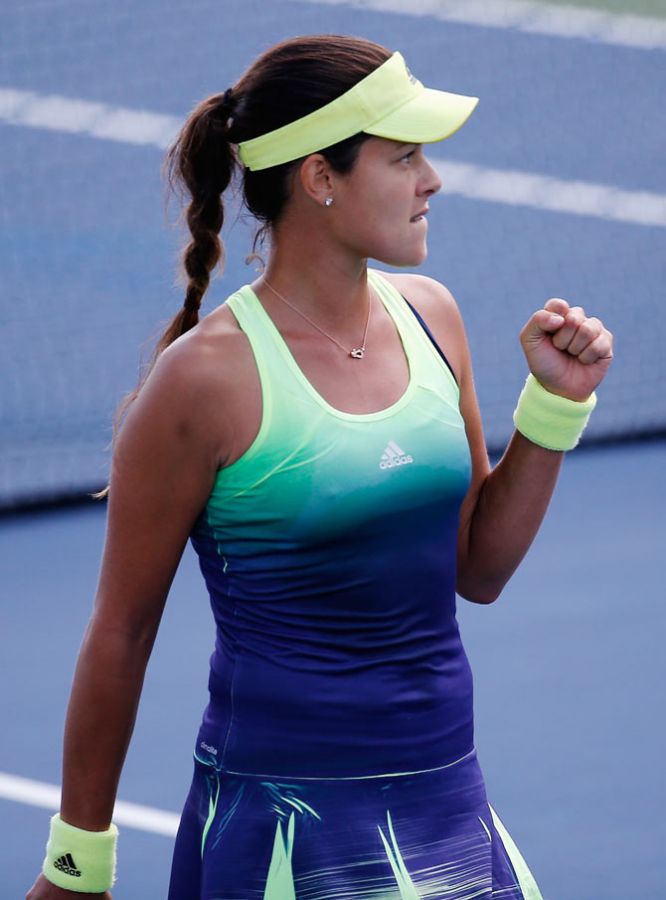 Sixth seed Ivanovic advanced after beating American Sloane 2-6, 6-4, 6-1. The Serb has beaten Williams only once in nine meetings with the only win coming at in a last-16 clash at the 2014 Australian Open.

Unseeded Russian Anastasia Pavlyuchenkova also advanced to the quarter-finals when Azarenka retired despite leading the match 6-1 0-3.

Rogers Cup champion Bencic took an eight-match winning streak into her last-16 clash with Lucie Safarova but the 18-year-old Swiss was forced to retire with a muscle strain after her seventh-seed opponents took the first set 6-2.

"First of all, I don't think it's very serious," Bencic told reporters.

"I just wasn't 100 percent today, and to beat Lucie or even compete against her, you need to be 100 percent."

Bencic will meet with her team before deciding whether she can play in the Connecticut Open next week, the final tournament before August 31-Sept. 13 US Open.

Bencic began her match against Safarova by breaking her opponent, but Safarova broke right back to win with ease and will next face either Ukrainian 14th seed Elina Svitolina or Frenchwoman Caroline Garcia in the quarter-finals. 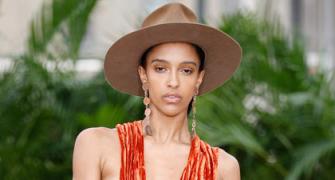 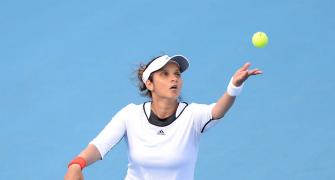