PIX: Champions Bayern celebrate after a football festival without fans There was something appropriate in the way that Bayern Munich's Joshua Kimmich celebrated his team's Champions League triumph over Paris St Germain on Sunday.

More than 90 minutes after the final whistle had blown on the 1-0 victory, Kimmich sat in the centre circle, in front of 65,000 empty seats at the Estadio da Luz, banging on a drum.

It was not quite full-on social distancing - the full-back was joined in the middle of the field by team-mates Serge Gnabry and David Alaba - but it was poignant nonetheless. 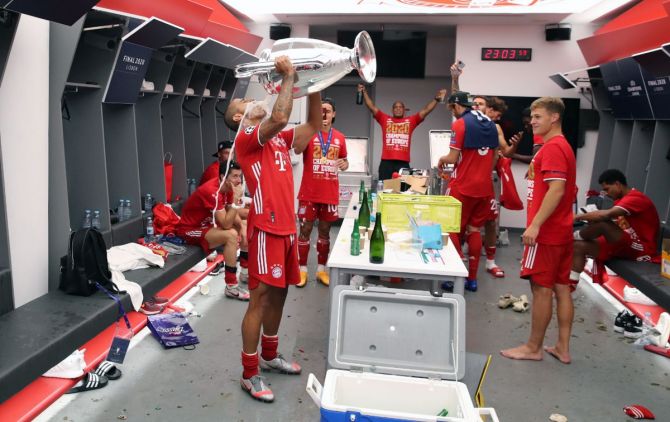 IMAGE: With a 1-0 victory over Paris St Germain in the final, Bayern have achieved what no team have managed in Europe's elite club competition -- win every game. Photograph: FC Bayern Munich/Twitter

This has been a Champions League season that was stopped, like so many aspects of life, in March by the COVID-19 pandemic but which was completed in the Portuguese capital, albeit in highly unusual circumstances.

Seven games in 11 days were played in two venues in Lisbon, culminating in Sunday's final, but fans were not allowed into the stadiums with those present limited to a handful of team officials, security and medical staff and media.

Somehow, despite the alien surrounds and the lack of anything resembling a football atmosphere, the players produced some memorable games with Bayern deservedly crowned European champions. 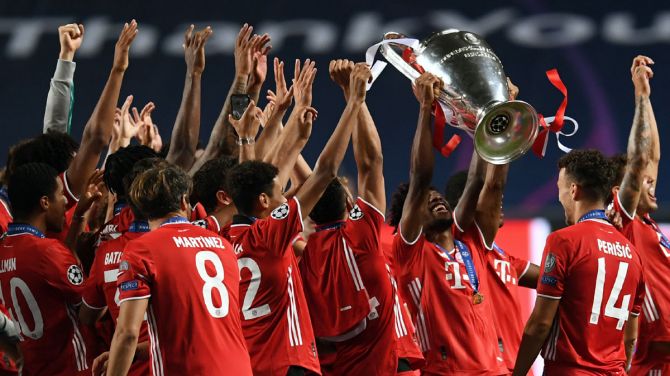 "It has been an extreme challenge for us," Aleksander Ceferin, president of European soccer's governing body UEFA told Reuters before Sunday's final.

"The most challenging was everything connected to health and this virus which is spreading all around the world," he said. "We try to control everybody, to be locked to be, separated from the rest of the world, but it is a huge task. That was the main challenge."

While players were kept in team hotels and training facilities, isolated from the outside world, UEFA carried out regular testing throughout the tournament and together with the Europa League, UEFA Youth League and Women's Champions League, over 12,000 tests have been carried out. The Champions League final is supposed to be a festival of football though, a chance for fans to enjoy a weekend in a European city and celebrate their team's success while partying night and day.

But not even in a personal invite from the Portuguese Prime Minister Antonio Costa could persuade more than a handful of supporters to travel to Lisbon for games they could not attend.

"It is different, but today it is what we have to put up with in daily life, we have to adapt, but what is important is the love of the game that we have to preach and love for the team: Go Bayern!” said Jaice Domingues, a Brazilian living in Lisbon who was taking pictures next to the huge inflatable Champions League cup in the main Rossio square. Some fans from France waited at Paris St Germain's hotel to try to raise their spirits when the team's bus returned with the defeated players.

"What is missing are the fans. Maybe the future will bring games with fans again - this sport, or a stadium like this one here, simply deserves that".