World champions the United States were dealt a 3-0 drubbing by Sweden to end a 30-month unbeaten run, and the Netherlands put 10 goals past a hapless Zambia on a day of drama as the Olympics women's soccer tournament kicked off.

Several teams including the US, Britain, Chile, Sweden and New Zealand took the knee before Wednesday's kickoffs in support of racial equality, while two Brazil veterans set Games records.

In an empty Tokyo Stadium, Sweden sent the four-times Olympic gold medallists to their first defeat in 45 international matches, with forward Stina Blackstenius punishing sloppy US play with a double in their Group G clash. 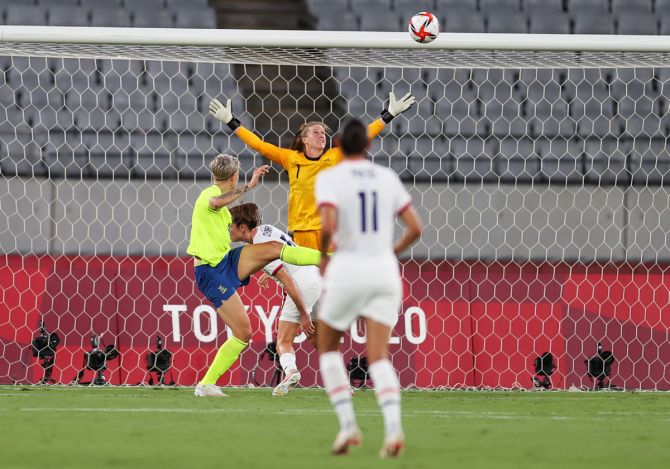 No team has ever won Olympic gold while world champion since women's football made its Games debut in 1996.

"We got our asses kicked, didn't we?" admitted US midfielder and star player Megan Rapinoe. "I thought we were a little tight, a little nervous, just doing dumb stuff".

The clash was a rematch of the 2016 quarter-final, which the Scandinavians won on penalties. The Dutch served a clear warning to rivals with a 10-3 thrashing of Zambia in Group F, with Arsenal forward Vivianne Miedema scoring four times.

The Netherlands went into the interval with a 6-1 lead but took their foot off the gas in the closing stages, allowing Babra Banda to complete her hat-trick with two late goals for the southern African side. Brazil, seeking their first gold medal in the event, hammered China 5-0 with veterans Marta and Formiga writing their names into the record books.

Marta, widely regarded as the greatest women's footballer of all time with a record five World Player of the Year awards, became the first footballer to score in five consecutive Olympic Games, netting twice.

The 35-year-old passed up on the chance to complete her hat-trick and score her 13th Olympic goal, when she stepped aside to allow team mate Andressa to convert a penalty. 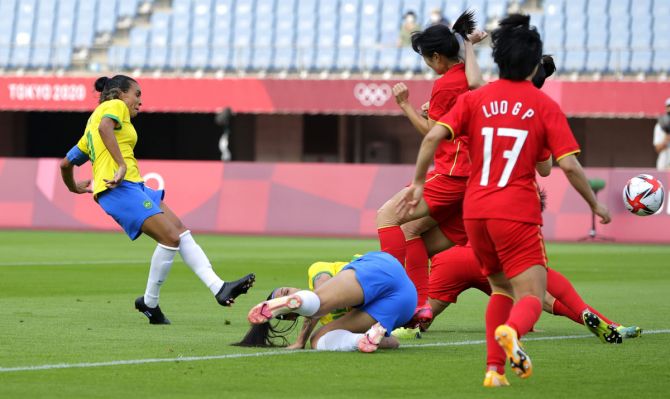 Hosts Japan put up a spirited fight in Group E to draw 1-1 with Canada, whose forward Christine Sinclair celebrated her 300th cap with her 187th international goal - more than any other player.

Great Britain's Ellen White scored the first goal of the tournament in the 17th minute against Chile in Group E and the Manchester City forward added another in the second half to cap a dominant 2-0 win.

Australia edged New Zealand 2-1 in the day's final match in Group G between the co-hosts of the 2023 World Cup.

West Ham's Tameka Yallop and Chelsea forward Sam Kerr scored in the first half while Gabi Rennie denied Australia a clean sheet with a goal in second half injury time.