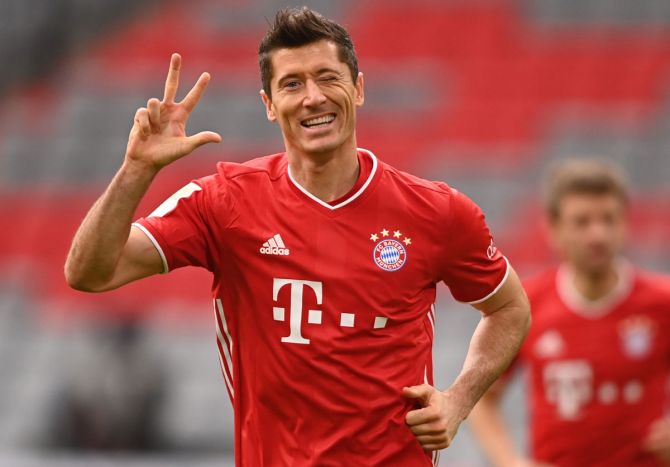 In a typically ruthless Bayern performance, the prolific Poland forward struck twice in the first half hour and added a third after halftime before substitutes Leroy Sane and Jamal Musiala completed the rout.

The only disappointment for Bayern was an early injury to Alphonso Davies who had to be carried off after twisting his ankle in the fifth minute.

Bayern later said the 19-year-old Canadian had suffered ligament damage and would be sidelined for six to eight weeks.

Bayern moved into second place with 12 points from five games, one behind RB Leipzig who beat Hertha Berlin 2-1. Eintracht have eight points.

Bayern coach Hansi Flick said the only surprise about Lewandowski, who has faced a marathon of games since the start of the season, was that he asked to be replaced after his third goal.

"What more can I say about Robert Lewandowski?," said Flick. "All I can say today is that he asked to come off -- that is possibly something that has never happened before." 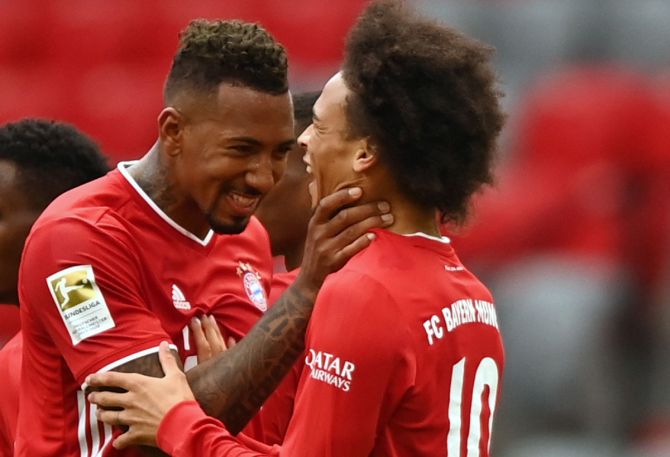 Eintracht were unbeaten in their opening four games but that record never looked likely to remain intact after they gave Lewandowski far too much room and he scored almost nonchalantly in the 10th minute.

He made no mistake, however, in the 61st minute, holding off two defenders to slot his effort past Trapp after Douglas Costa threaded the ball to him.

Sane's fourth in the 74th minute was reminiscent of former Bayern winger Arjen Robben as he raced down the touchline, cut inside and sent a dipping left-foot shot past a stranded Trapp.

Musiala capped the performance by adding the fifth in the 90th minute after a series of rebounds in the penalty area.

"We played a very orderly game in the first half and were very good in the 50-50 battles," said Eintracht coach Adi Huetter. "After the third goal, it was tough." 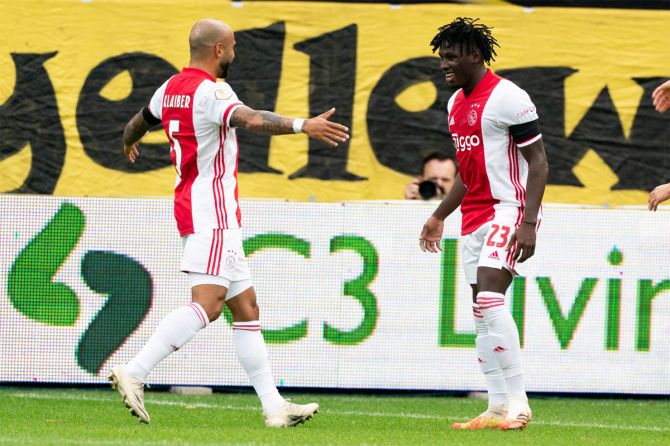 IMAGE: Ajax scored 13 goals past a hapless VVV-Venlo side to move to the top of the standings, with seven different players getting their names on the score sheet. Photograph: AFC Ajax/Twitter

Ajax Amsterdam set an Eredivisie record when they scored 13 goals past a hapless VVV-Venlo side to move to the top of the standings on Saturday, with seven different players getting their names on the score sheet.

The previous record for most goals scored in an Eredivisie game was also held by Ajax when they beat Vitesse 12-1 in 1972.

Led by 19-year-old Lassina Traore, who scored five times and assisted three more, Ajax dominated the contest and were already 4-0 up when Venlo were reduced to 10 men after skipper Christian Kum was sent off on VAR review for a high boot.

What followed was an eight-goal salvo in 24 second half minutes as Ajax's players controlled possession and lined up to take shots on goal, with veteran 37-year-old forward Klaas Jan Huntelaar also scoring twice in two minutes.

The visitors finished the match with an eye-watering 23 shots on target and could have scored more had Venlo goalkeeper Delano van Crooij not made 10 saves.

© Copyright 2020 Reuters Limited. All rights reserved. Republication or redistribution of Reuters content, including by framing or similar means, is expressly prohibited without the prior written consent of Reuters. Reuters shall not be liable for any errors or delays in the content, or for any actions taken in reliance thereon.
Related News: Bayern Munich, Robert Lewandowski, Ajax Amsterdam, Eintracht Frankfurt, IMAGE
SHARE THIS STORYCOMMENT
Print this article 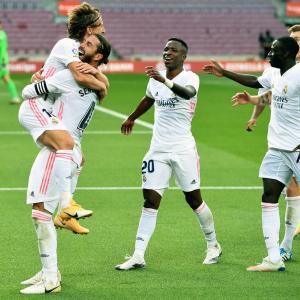