Bournemouth breathed life into their Premier League survival bid on Sunday, coming from a goal down to beat fourth-placed Leicester City 4-1 for their first win in 10 games.

Leicester were in command after Jamie Vardy's scrappy first-half goal. But with the relegation trapdoor creaking underneath their feet, Bournemouth turned the match around in stunning fashion with Dominic Solanke scoring twice.

Junior Stanislas equalised from the penalty spot in the 66th minute after a mistake by Leicester keeper Kasper Schmeichel, who was at fault again one minute later when he allowed Solanke's shot to trickle over the line.

To make matters worse for the Foxes, defender Caglar Soyuncu was shown a straight red card after tangling with Callum Wilson immediately after Bournemouth's goal.

Leicester then collapsed in alarming fashion.

Stanislas's shot in the 83rd minute went in off Leicester defender Jonny Evans before Solanke seized on more dreadful defending to add his second. 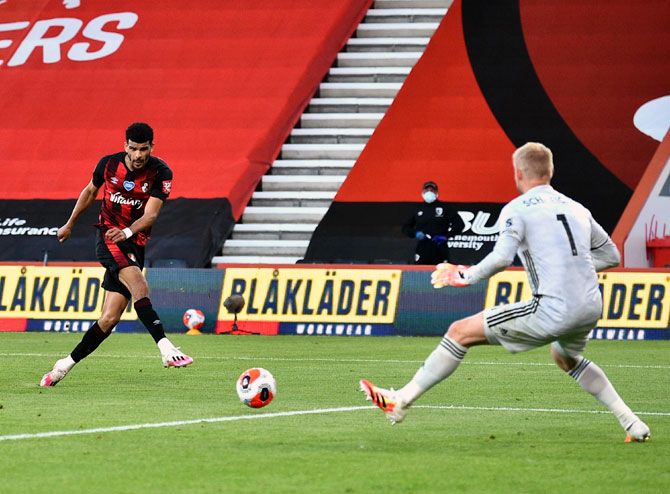 With Aston Villa winning earlier in the day, Bournemouth began the match second from bottom, six points behind fourth-from-bottom Watford. The victory - their first since February 1 - means that with three games remaining they still have hope of securing a sixth successive season of top-flight football.

They moved back above Villa to 18th place on 31 points, three behind both Watford and West Ham United, who face each other in the next round of fixtures.

"We needed to change things at halftime and had the mentality that we had to go for it," Bournemouth boss Eddie Howe said. "Thankfully we were able to swing things round."

Vardy bundled in his 23rd goal of the season after 23 minutes when Lloyd Kelly failed to clear Kelechi Iheanacho's cross - and it seemed Leicester were on course for a comfortable win.

But when Schmeichel kicked a clearance straight at team mate Wilfred Ndidi, who then fouled Callum Wilson to concede a penalty, it turned the game on its head.

"I didn't see that coming but we are not good enough to get too comfortable," Leicester manager Brendan Rodgers said.

"We were in control of the game. But we let them into the game with a penalty and I was very disappointed with how we played from there." 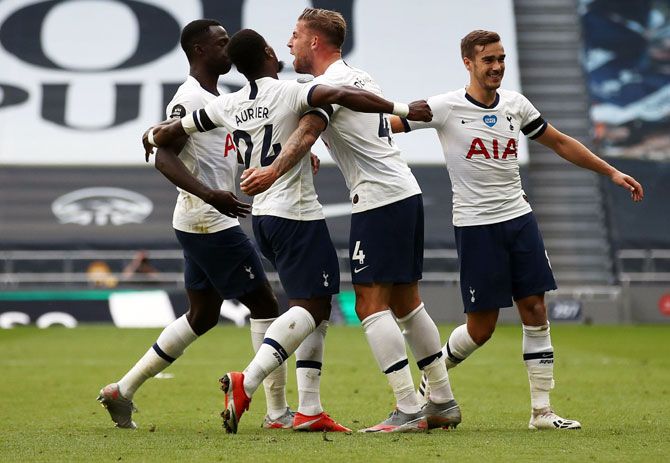 Toby Alderweireld's 81st-minute header sealed a 2-1 Premier League victory for Tottenham Hotspur against Arsenal in the first north London derby in their new stadium on Sunday.

The match appeared to be heading for a draw but Alderweireld claimed all three points for Spurs to move Jose Mourinho's side above Arsenal into eighth place in the battle for local pride.

With three games left Tottenham have 52 points to Arsenal's 50, but are seven points behind fourth-placed Leicester City. 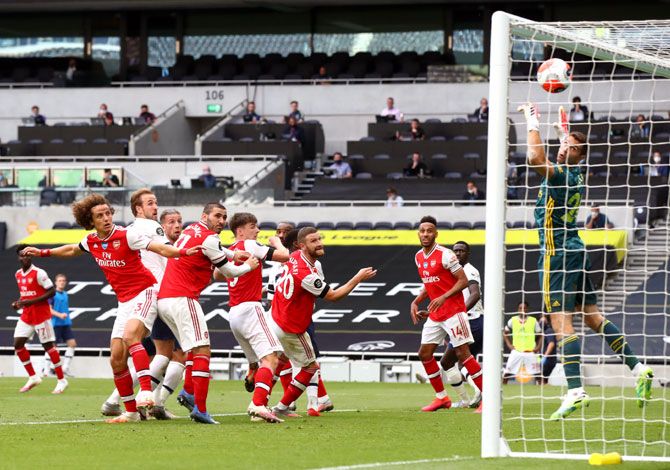 Arsenal took the lead in spectacular fashion with Alexandre Lacazette's 17th-minute pile-driver but they were pegged back almost immediately as Son Heung-min punished a defensive error.

Both sides were denied by the woodwork and Arsenal were in the ascendancy after the break before Tottenham's strong finish sealed a third successive home win since the restart. 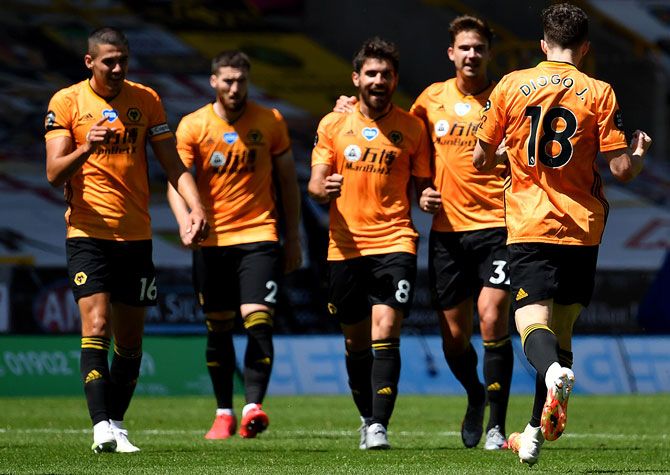 Wolverhampton Wanderers boosted their hopes of qualifying for the Champions League with an emphatic 3-0 home win over Everton in the Premier League on Sunday.

Victory lifted Nuno Espirito Santo's side up to sixth in the standings with 55 points -- four points behind fourth-placed Leicester City who play Bournemouth later on Sunday.

Everton remained in 11th place on 45 points, with Carlo Ancelotti's dreams of European qualification fading with only three games left in the season.

"What was important was the timing when we scored, the end of the first half and the beginning of the second half," Santo told Sky Sports.

"It's very difficult for Everton to react at that moment and we were able to manage the game better."

Wolves took the lead in first-half stoppage time when Daniel Podence was fouled by Lucas Digne and Raul Jimenez maintained his 100% penalty conversion rate this season to score his 16th goal of the league campaign.

Leander Dendoncker doubled the lead straight after the interval when he directed a glancing header past the outstretched arm of Everton goalkeeper Jordan Pickford.

Podence nearly made it 3-0 just after the hour mark when his shot on goal was spilled by Pickford but the Englishman recovered quickly to claw the ball back before it crossed the line and technology confirmed he had made the save.

Diogo Jota sealed the three points after midfielder Ruben Neves found him with a pinpoint cross-field ball and the Portuguese forward chested it down before firing an emphatic half-volley past Pickford at the near post.

Everton defender Seamus Coleman said their performance was "shocking" after the Merseyside club failed to win a third game in a row.

"There's no hiding, they were better all over the pitch and we need to ask some serious questions of ourselves," Coleman said. "The attitude and desire is not there, we got beat by the better team.

"As individuals, as a club we need to be expecting better and the lads really need to dig in or that won't be good enough for this manager or this football club."

© Copyright 2020 Reuters Limited. All rights reserved. Republication or redistribution of Reuters content, including by framing or similar means, is expressly prohibited without the prior written consent of Reuters. Reuters shall not be liable for any errors or delays in the content, or for any actions taken in reliance thereon.
Related News: Tottenham Hotspur, Everton FC, Arsenal, Toby Alderweireld, Leicester City
SHARE THIS STORYCOMMENT
Print this article 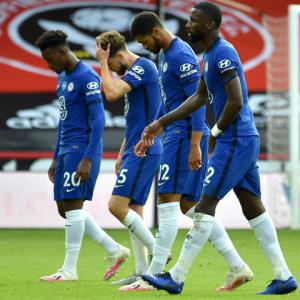