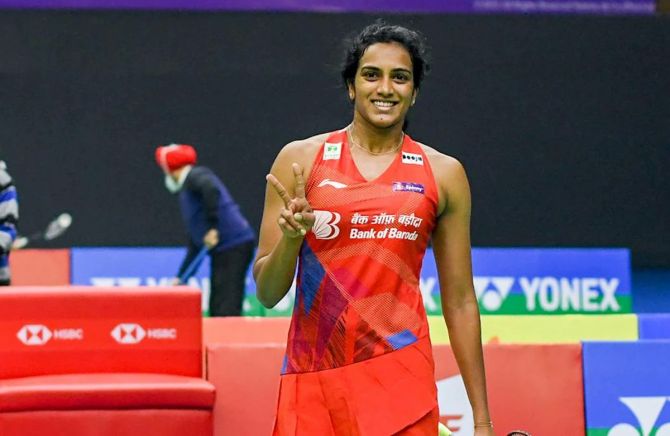 Playing in a depleted field due to multiple COVID-19 cases, the top seeded Sindhu hardly broke a sweat while getting past Bansod 21-13, 21-16 in just 35 minutes.

It was the former World champion’s second Syed Modi title, having annexed the BWF World Tour Super 300 tournament in 2017.

Bhatnagar and Crasto inflicted a 21-16, 21-12 defeat on the unseeded Indian duo in the summit clash that ended in 29 minutes.

Earlier, the men's singles final between Arnaud Merkle and Lucas Claerbout was declared a 'No Match' after one of the finalists tested positive for COVID-19.

It was expected to be a one-sided women's singles match between world number seven Sindhu and young Bansod, ranked 84th, and it turned out to be exactly that. Sindhu used her vast experience and skills to great effect as Bansod found it extremely difficult to adjust to her opponent's game from the onset.

The Tokyo Olympics bronze medallist took off from the word go and raced to a 7-0 lead in no time. She used her height and reach to great effect to increase her lead to 11-1 at the break.

After the break, Bansod tried to up her game and collected a few points to close the gap but it was no match for a much superior Sindhu, who closed out the first game with consummate ease.

The second game, however, produced a better contest with Bansod trying her best to lift her game, and she did that too, but it was not enough to challenge Sindhu's class.

Sindhu used her height to mix her smashes with pinpoint drop shots and raced to a 11-4 lead at the break.

She continued in the same vein even though Bansod tried her best to forge a comeback and secured four points on the trot to reduce the deficit to 17-12.

Bansod picked up four more points but lacked the temperament and class as Sindhu closed out the contest without any fuss. 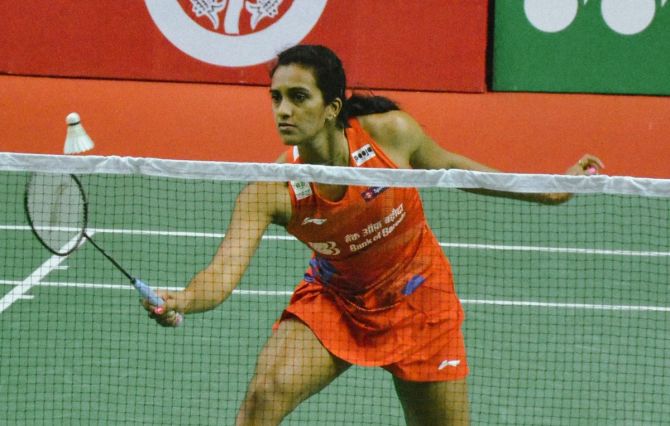 "From the first game I just went for the win and it was important for me that every point mattered. Even though I was leading I didn't take it easy, may be, couple of points I made unforced errors but I made sure I came back into the game and thought that I should be consistent," Sindhu said after the match.

The Olympic star lauded India's bench strength and Bansod for her spirited show in the tournament. "In the whole week each match was important because even though I was playing with Indians I could see good talented youngsters who are coming up and are really doing well. It was good she (Bansod) is an upcoming player and she is doing really well. She had some good matches in quarterfinals and semi-finals," Sindhu said.

Sindhu said she is at happy space with her game and is looking forward to win more laurels for the country in future. "My game is perfectly alright. Last week in the Indian Open it wasn't my day and I think it happens.

"That day matters who plays well and gives their best comes out winner. But I played with her (Supanida) again here and it was sweet revenge that I won against her this time. So I am happy with my form."

"Every medal means a lot to me because there are a lot of memories with these and I am sure and hope I will get many more medals looking forward," Sindhu concluded.