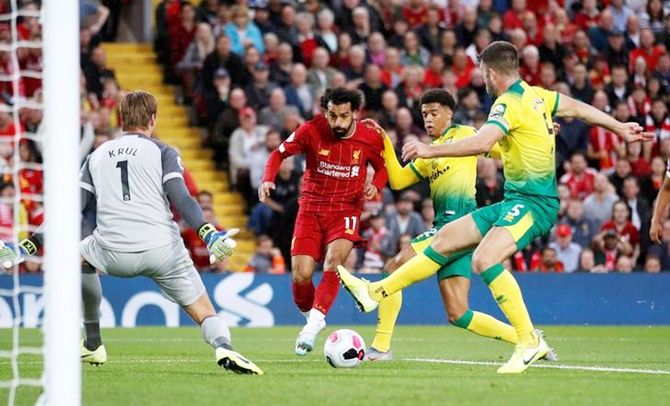 European champions Liverpool made an emphatic start to the new Premier League season by scoring three times in the opening half an hour as they taught promoted Norwich City a harsh lesson with a 4-1 thrashing at Anfield on Friday.

The unfortunate Grant Hanley scored an own goal before Mo Salah, Virgil van Dijk and Divock Origi netted before half-time, with Norwich scoring through Teemu Pukki just after the hour.

The one setback for Klopp on an encouraging night came with an injury to Brazilian keeper Alisson Becker who was taken off in the 39th after suffering a calf injury and will now miss Wednesdy’s UEFA Super Cup clash with Chelsea. 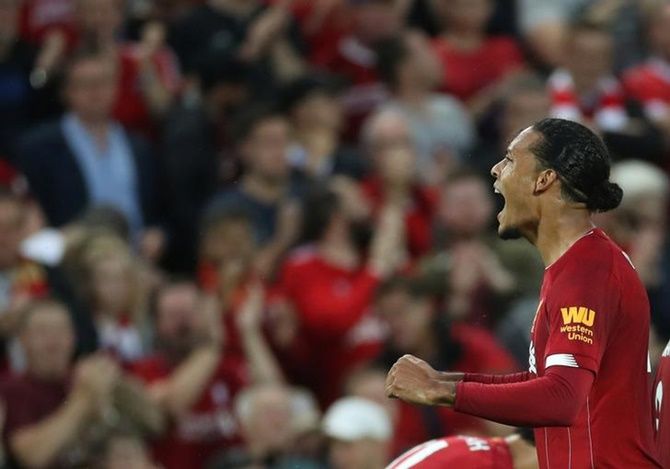 Becker’s misfortune handed an unexpectedly early debut to 32-year-old Spanish keeper Adrian, who had been, prudently, signed as cover on a free transfer just four days previously after being released by West Ham United.

“There’s actually nothing bad to say about the game apart from Ali’s injury,” said Klopp.

“For 60 minutes we looked very sharp, then we have to control the game a bit more. Norwich have all my respect. they stayed cheeky, they enjoyed their football,” he added.

The result was no surprise but the way Liverpool so quickly hit their stride was impressive and sent a message to Pep Guardiola’s City that they face another battle this season.

Liverpool’s achievement in winning their sixth European Cup by beating Tottenham Hotspur in May’s Champions League final in Madrid, was celebrated in song and with choreographed displays by their supporters before the game.

For one of the unlikely heroes of that campaign, Belgian forward Origi, there was the reward of a starting place ahead of Sadio Mane, while Joe Gomez was preferred to Joel Matip alongside Van Dijk at the back.

It took just seven minutes for Liverpool to open their account as Norwich captain Hanley, attempting to clear a low cross from the left by Origi, sliced the ball into his own goal.

Salah, joint league top scorer last season on 22 goals along with Mane and Arsenal’s Pierre-Emerick Aubameyang, then doubled the lead in the 19th with a characteristic left-foot finish from a tight angle after a nice set-up from Roberto Firmino.

The game was virtually over in the 28th minute when Norwich made it far too easy for Van Dijk to nod home a Salah corner to make it 3-0 and it could have been four just minutes later but Norwich keeper Tim Krul did well to keep out a Firmino volley. 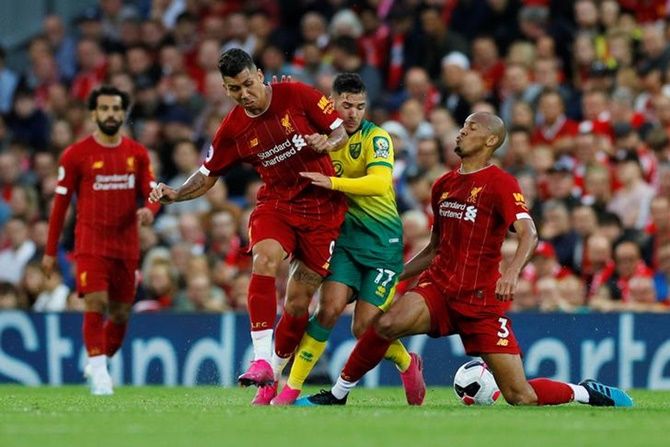 Liverpool suffered a blow when Becker went off just before halftime but Origi made it 4-0 three minutes before the break with a well-placed header from a right-wing Trent Alexander-Arnold cross.

After the break Jordan Henderson had a shot pushed on to the bar by Krul after nice work from Origi and Firmino somehow put the ball wide from close range as Liverpool threatened to add more misery to Norwich’s return to the top flight.

The East Anglians got a reward for their efforts when, moments after substitute Moritz Leitner struck the bar, their Finnish striker Pukki got a goal back in the 64th with a smart finish after being found by a clever Emiliano Buendia pass.

Norwich’s German boss Farke took encouragement from the way his team stuck at their task after the break and this fixture was always going to be a tough assignment after a three-season absence from the Premier League.

“We were greedy, we wanted to be the first team in two-and-a-half years to win here,” said Farke. “But I’m totally in love with this team. The mentality to win the second half in front of an excited home crowd, we showed great character.”

© Copyright 2022 Reuters Limited. All rights reserved. Republication or redistribution of Reuters content, including by framing or similar means, is expressly prohibited without the prior written consent of Reuters. Reuters shall not be liable for any errors or delays in the content, or for any actions taken in reliance thereon.
Related News: Norwich, Liverpool, Divock Origi, Virgil van Dijk, Juergen Klopp
COMMENT
Print this article 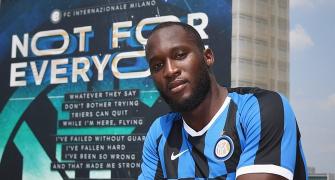 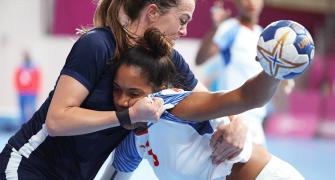 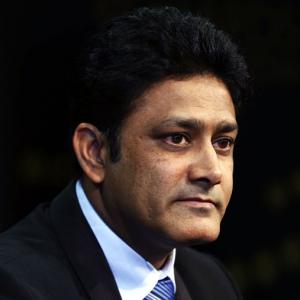