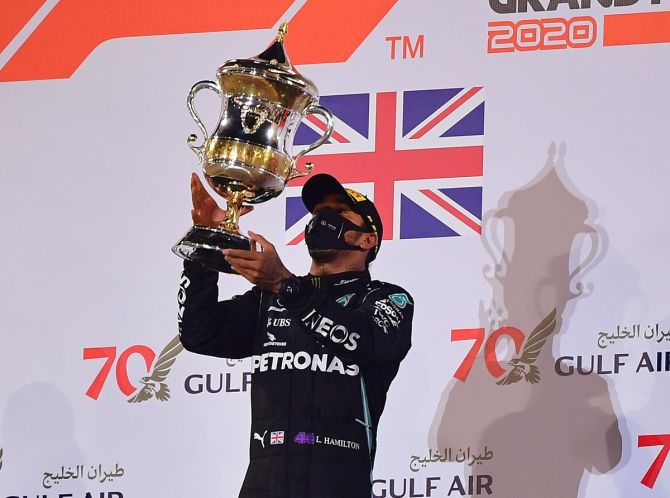 IMAGE: Mercedes driver Lewis Hamilton celebrates with the trophy on the podium after winning the Bahrain Grand Prix, at the Bahrain International Circuit, in Sakhir, on Sunday. Photograph: Giuseppe Cacace/Reuters

Lewis Hamilton won the Bahrain Formula One Grand Prix for Mercedes on Sunday after French driver Romain Grosjean had a miraculous escape from a fiery first-lap crash that ripped his car in two.

The win, from pole position, was the 95th of seven-times World champion Hamilton's career and came with the safety car leading the field to the chequered flag.

Hamilton, who clinched the title in Turkey two weeks ago, has now won the last five races and 11 of the 15 so far this season.

The race around the floodlit Sakhir track was halted seconds after the start when Grosjean’s Haas was ripped in half and engulfed in flames as it speared through protective barriers following contact with the AlphaTauri of Daniil Kvyat.

The Frenchman, who managed to free himself from the wreckage and jump clear, was taken to a nearby hospital with minor burns and suspected broken ribs.

He was voted ‘Driver of the Day’ by fans. 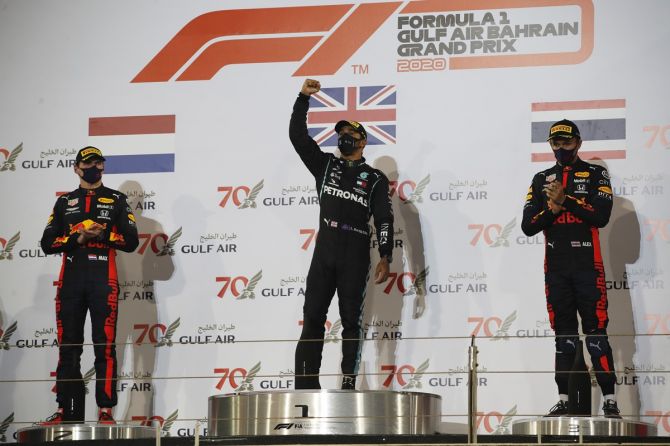 The race was halted for an hour and 20 minutes as track workers repaired the barriers.

Drama ensued immediately at the restart when Lance Stroll’s Racing Point was flipped upside down after contact with Kvyat. The Canadian climbed out unscathed and the safety car was deployed so his car could be removed.

The race settled into a procession when it eventually resumed for good, with Hamilton unchallenged on his way to his fourth win in Bahrain.

Lando Norris and Carlos Sainz took fourth and fifth for McLaren, allowing the Woking-based squad to vault into third in the overall team standings ahead of Racing Point, with Pierre Gasly sixth for AlphaTauri.

Daniel Ricciardo was seventh for Renault ahead of the Mercedes of Valtteri Bottas, who made a poor start and then suffered a puncture in yet another nightmare weekend for the Finn.

Esteban Ocon was ninth in the other Renault with Charles Leclerc, who earned the ire of Ferrari team mate Sebastian Vettel after making an opportunistic move on him, rounding out the top 10.

© Copyright 2021 Reuters Limited. All rights reserved. Republication or redistribution of Reuters content, including by framing or similar means, is expressly prohibited without the prior written consent of Reuters. Reuters shall not be liable for any errors or delays in the content, or for any actions taken in reliance thereon.
Related News: Lewis Hamilton, Bahrain Formula, Alexander Albon, Romain Grosjean, Daniil Kvyat
SHARE THIS STORYCOMMENT
Print this article 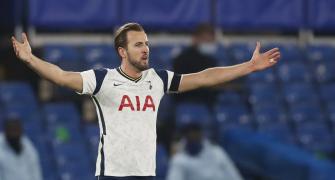 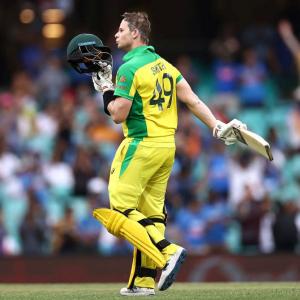 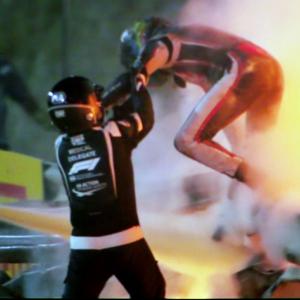