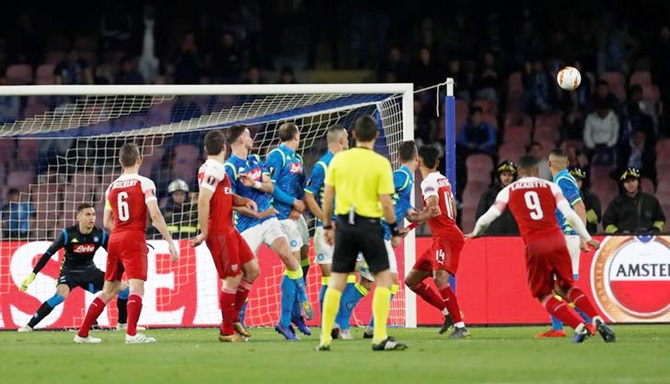 A magnificent Alexandre Lacazette free-kick sent Arsenal into the Europa League semi-finals with a comfortable 1-0 win away to a toothless Napoli on Thursday, ending Serie A's interest in European competition this season.

The Frenchman struck in the 36th minute to earn Arsenal a tie against Valencia, just as Napoli, trailing 2-0 from the first leg, were threatening to take control of the game.

Carlo Ancelotti's team lost their way after that and, although the hosts had 67 percent of possession, Arsenal were able to sit out the second half to reach the semi-finals for the second season in a row with a 3-0 aggregate win.

"We came here with ambition, we wanted to win, to score some goals. We did it, and kept a clean sheet as well, which is important for the confidence," said Arsenal defender Laurent Koscielny.

"We had two chances to score and we didn't succeed," he added. "We have not been as lucid in the last two months, we are more predictable and because of that, we have difficulty with our finishing."

In a lively opening half hour, Napoli threatened to make a breakthrough as Jose Callejon's effort was saved by Petr Cech's legs and Arkadiusz Milik had a goal chalked off for offside. 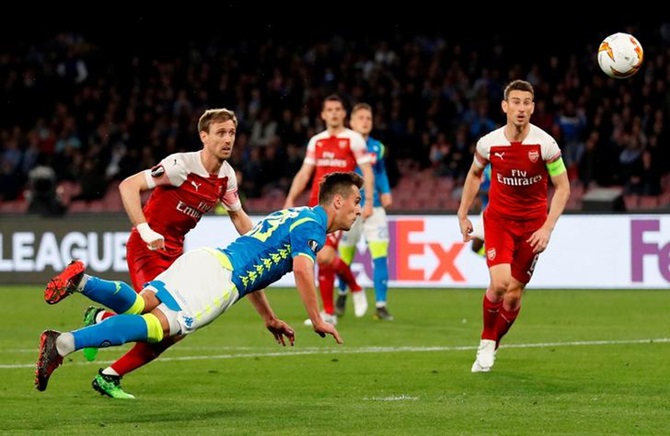 The Pole should have put Napoli ahead minutes later when compatriot Piotr Zielinski's cross found him unmarked in the penalty area but he headed wide.

Arsenal also lost Aaron Ramsey to an apparent hamstring problem but, just as it seemed things were going against them, they went ahead as Lacazette curled his free kick around a poorly organised wall from 25 metres.

Arsenal should have wrapped up the game four minutes into the second half but Pierre-Emerick Aubameyang, with only Alex Meret to beat, placed his shot too near the goalkeeper who was able to save.

The second half petered out after that as Arsenal sat back and Napoli enjoyed most of the possession but did little with it.

Lorenzo Insigne shot weakly at Cech after getting clear of the Arsenal defence and was immediately substituted, a decision which infuriated the forward who watched the rest of the match on the touchline with his arms folded.

Fabian Ruiz summed up their evening by firing their last chance wildly over the crossbar in stoppage time.

"Insigne was just disappointed with the way the match went, he had believed in our chances like everyone else" said Ancelotti. "His reaction was not linked to the substitution." 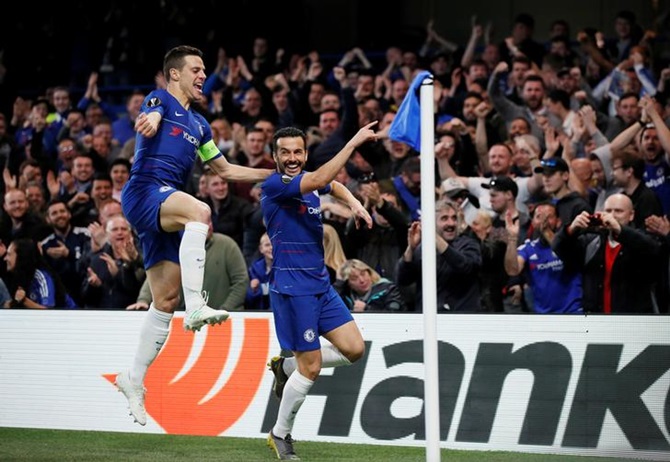 Chelsea reached the Europa League semi-finals by beating Slavia Prague 4-3 in a roller-coaster game, helped by a Pedro brace in a first-half onslaught before withstanding a comeback bid by the Czechs after the break.

Chelsea, who will face Eintracht Frankfurt in the last four, were cruising 4-1 at halftime but Slavia's Petr Sevcik slammed home two strikes early in the second half, narrowing the aggregate score to 5-3.

With the Stamford Bridge crowd increasingly unsettled, and Slavia being roared on by their travelling fans, Sevcik spurned a chance to cut the deficit further.

But Chelsea, having won the first leg 1-0, held on to set up a semi against Eintracht, who beat visiting Benfica 2-0 to go through on away goals after a 4-4 aggregate scoreline.

A Chelsea triumph in the Europa League, a trophy they won in 2013, would secure a way back into the prestigious Champions League if they finish outside Premier League top four this season. They currently sit fifth in the table. 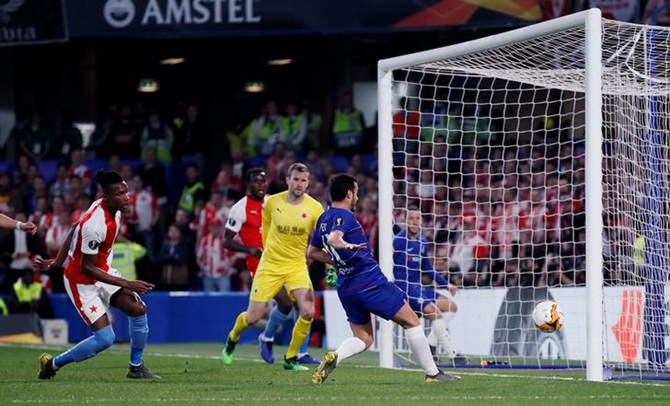 There was little hint of the tension to come when Chelsea raced into a 3-0 lead within 17 minutes, starting with Pedro chipping goalkeeper Ondrej Kolar after exchanging passes with Cesar Azpilicueta and Olivier Giroud in the fifth.

The Spain winger hit the post four minutes later only for the ball to rebound off Simon Deli's face for an own goal.

It was Pedro who carved out Chelsea's third when he squared for a simple finish by Giroud and the scurrying Spaniard claimed Chelsea's fourth in the 27th minute when he converted a rebound after Kolar saved from Giroud.

A minute earlier, Slavia's captain Tomas Soucek had given the boisterous Czech fans something to cheer when he powered in a header from a corner, leaving the door open for the visitors' improbable attempt to turn the game around. 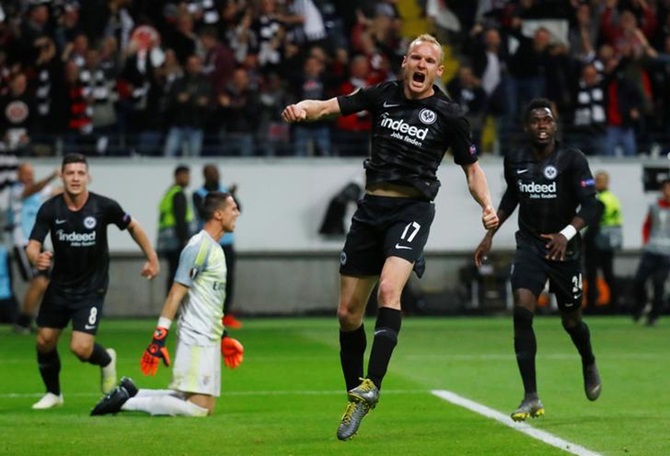 Eintracht Frankfurt beat Benfica 2-0 on Thursday to overturn a 4-2 first leg deficit and advance to the Europa League last four on the away goal rule for their first European semi-final appearance in 39 years.

Goals from Filip Kostic and Sebastian Rode were enough to put them through and they will next face Chelsea, who beat Slavia Prague.

Eintracht, German Cup winners last season, reached their first semi-final in a European competition since winning the UEFA Cup back in 1980 by punishing their opponents' passive approach.

The Portuguese, finalists in 2013 and 2014, were largely toothless, content to sit back and soak up the pressure but with little to show for up front until after Eintracht's second goal in the 67th minute.

Benfica initially did well to keep Frankfurt's attack at bay.

They could do nothing though when unmarked Filip Kostic fired in on the rebound after Mijat Gacinovic's effort bounced off the post in the 37th.

The German club, one of four former winners of the trophy in this season's quarter-finals, along with Chelsea, Napoli and Valencia, needed only one more goal to advance to the last four.

However, it was Benfica's first leg hat-trick hero Joao Felix who came close in the 48th minute. He shook off two markers, cut back into the box from the left but his effort was deflected narrowly wide by Frankfurt defender Simon Falette.

That was to be the visitors' only real chance and Rode settled the tie for the hosts when he drilled in from the edge of the box.

Benfica hit the post in the 85th but could not find the goal that would send them through. 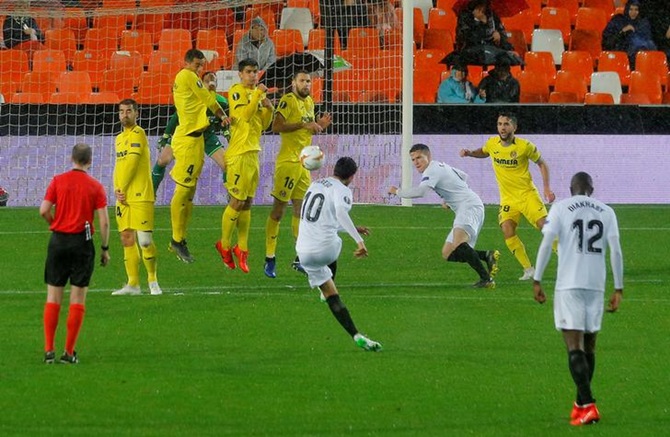 Valencia eased into the Europa League semi-finals for the first time in five years with a comfortable 2-0 win at home to fellow-Spaniards Villarreal in heavy rain on Thursday for a resounding 5-1 aggregate scoreline.

Toni Lato and Dani Parejo scored the goals that secured the victory and set up a meeting with Arsenal and Valencia's former coach Unai Emery in the last four after the London side won 1-0 at Napoli to wrap up a 3-0 aggregate victory.

Full back Lato strolled into a gaping hole in the visiting defence to volley Valencia in front in the 13th minute at a rain-swept Mestalla to further settle the home side, who enjoyed a 3-1 win at Villarreal in the first leg.

Valencia doubled their lead early in the second half with a free kick by captain Parejo which took a deflection off defender Ramiro Funes Mori, and many fans took the goal as their cue to leave the roofless stadium in search of some shelter.

The only disappointment for Marcelino's side is that their former Arsenal midfielder Francis Coquelin is suspended from the semi-final first leg after a late booking for handball. 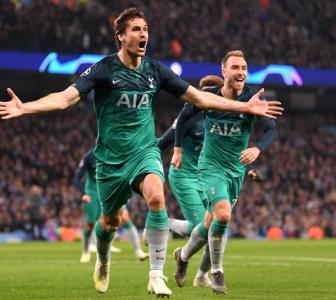 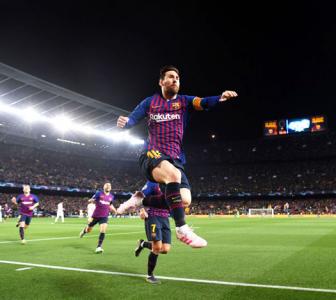 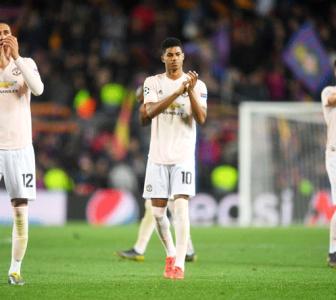 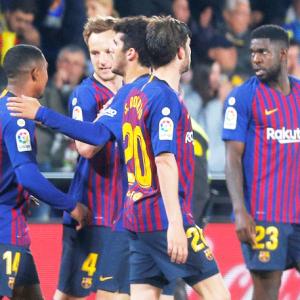 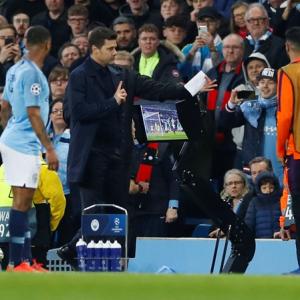 Welcome to the era of the 'provisional goal'