Dominic Thiem ended six years of Grand Slam frustration against Rafael Nadal on Wednesday with a seismic 7-6(3), 7-6(4), 4-6, 7-6(6) upset that booked his maiden Australian Open semi-final and rocked the old guard of men's tennis.

After pulling off a nerve-shredding win that quashed doubts about his prowess on hardcourts, the 26-year-old Austrian will face Alexander Zverev for a place in the final, a match-up scarcely imaginable at the start of the tournament.

Fifth seed Thiem will head into Friday's clash against the young German brimming with confidence, having ended top seed Nadal's bid for a record-equalling 20th Grand Slam title, despite a few wobbles on the way to victory.

Turning the tables on the man who had beaten him in all five of their previous Grand Slam meetings, including the last two French Open finals, Thiem became only the second Austrian to reach the last four at Melbourne Park, following Thomas Muster's runs in 1989 and 1997. 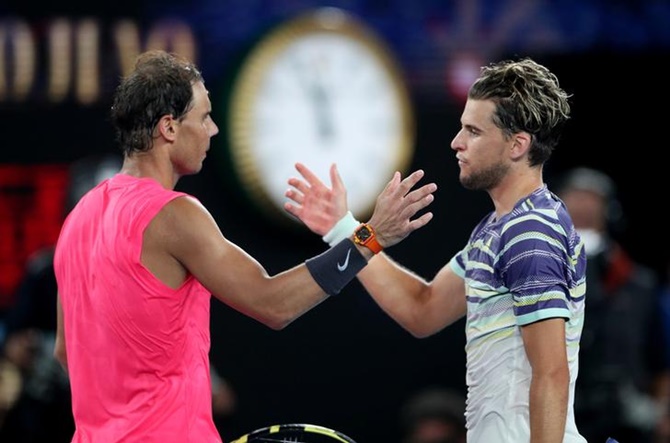 IMAGE: Dominic Thiem and Rafael Nadal meet at the net after their quarter-final. Photograph: Hannah Mckay/Reuters

In a grandstand finish with the terraces roaring, Nadal saved two match-points in the decisive tie-break but surrendered on the third when he slammed a forehand into the net.

The result was different but the match had echoes of the pair's five-set marathon at the 2018 US Open quarter-finals, when Nadal finally prevailed at 2:04 am local time after four hours and 49 minutes of gut-wrenching play.

This time, after four hours and 10 minutes, the Spaniard left with plenty of regrets and, most likely, some ill will toward the net.

The net cord was decisively in Thiem's corner. He clipped it with a backhand winner that secured the final match point.

"I really feel I was lucky in the right situation, the net cord was really on my side," an exhausted Thiem said on court.

"It's necessary because he's one of the greatest of all time, biggest legend the sport ever had. So you need some luck to beat him."

Nadal had his chances. He failed to convert set point when serving for the opening frame and let Thiem off the hook again when 4-2 up in the second. 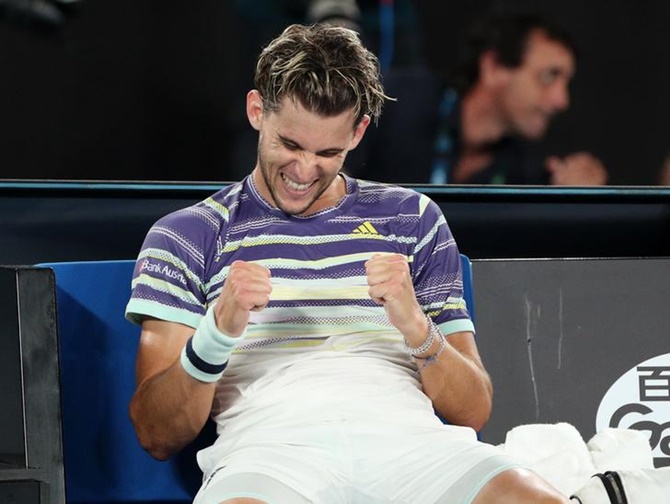 After wrenching the momentum from the Austrian with a brave third set rally, Nadal gave it right back, squandering three break points early in the fourth set and then promptly dropping serve.

The Mallorcan has overcome bigger problems in a long and brilliant career, so there was never any danger he would ever go quietly.

He scrapped deep into the set and the pressure finally told on Thiem, who crumbled when serving for the match at 5-4.

Thudding into the net after a double-fault, Thiem handed the break back to Nadal with a wild forehand.

"Special situation for me, serving for the match against Rafa for my first semi-finals here," said Thiem, with a laugh.

But for once the indefatigable Spaniard was unable to make Thiem pay.

Even when Thiem took a tumble mid-rally during the final tiebreak, he scrambled to his feet to take a 5-2 lead when Nadal punched a backhand into the tramlines.

On the first match point, Thiem wound up his forehand for a killer blow but bashed straight into the net.

The crowd then gasped when Nadal bravely challenged a line call on the second match point after Thiem's defensive lob tested the baseline.

The technology backed Nadal but his backhand failed him on the final point, planting the ball into a net that seemed against him all night.

"Of course, I am sad. I lost an opportunity to be in the semi-finals of another Grand Slam," said Nadal.

"But I lost against a great opponent. And he deserves it, too. Well done for him."

Zverev fights back to overcome Wawrinka

German seventh seed Alexander Zverev recovered from a slow start to beat former champion Stan Wawrinka 1-6, 6-3, 6-4, 6-2 in the other men's singles quarter-final at the Australian Open on Wednesday to reach his first career Grand Slam semi-final.

Zverev was once considered one of the leading 'Next Gen' contenders to break the Grand Slam hegemony of Novak Djokovic, Rafael Nadal and Roger Federer who have shared the last 12 majors between them.

But the German, who beat Federer and Djokovic on his way to the 2018 ATP Finals title, fell off the radar as he failed to get past the quarter-finals at the majors.

"It feels awesome, I don't know what to say," Zverev said. "I have done well in other tournaments, I have won Masters, I have won the World Tour finals but I never could break that barrier in the Grand Slams.

"You cannot imagine what this means to me and I hope this will be the first of many." 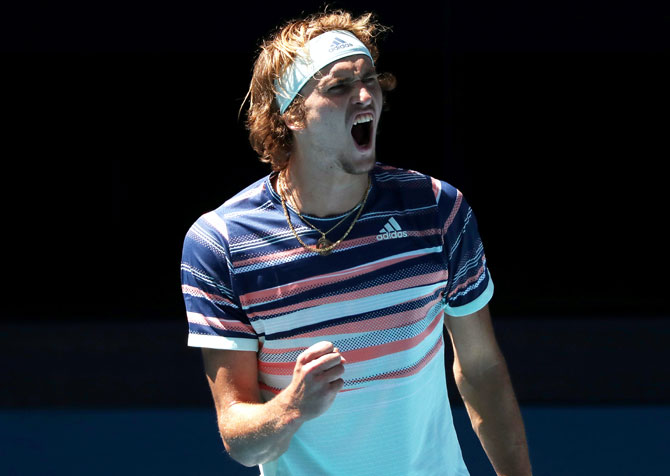 Zverev came to the year's first Grand Slam lacking confidence after losing all three of his singles matches at the inaugural ATP Cup.

He totalled 31 double-faults during the three defeats but his serve has been immaculate in the year's first Grand Slam.

Zverev hit 13 aces on Wednesday and while his opponent struggled with his serves, the German got 80% of his first serves in.

"Thanks for reminding me. I thought I had forgotten about it," Zverev said, when asked about what he did to improve his serve from the ATP Cup.

"I worked very hard, I worked a lot on it. This is a Grand Slam. This is where you are supposed to play your best tennis and I am doing that."

Swiss Wawrinka, who won the first of his three Grand Slams at Melbourne Park in 2014, broke Zverev twice early to breeze through the opening set but the 22-year-old German came roaring back into the contest.

The opening set against Wawrinka was the first Zverev lost in this year's Australian Open but he won the next three sets by breaking his 34-year-old opponent's serve five times.

"I was getting ready to talk to the press about why I lost in straight sets to be honest," Zverev joked, adding he needed time to adjust to conditions as he played at night before. "Then kind of turned it around and my energy picked up a little bit."

Zverev converted his first matchpoint when Wawrinka sent a forehand long and he will meet either top-seeded Spaniard Rafa Nadal or Austrian Dominic Thiem for a place in Sunday's final.

The German has pledged A$10,000 for every match he wins and his entire A$4.12 million ($2.82 million) first prize money to bushfire relief if he goes on to lift the trophy on Sunday.

© Copyright 2020 Reuters Limited. All rights reserved. Republication or redistribution of Reuters content, including by framing or similar means, is expressly prohibited without the prior written consent of Reuters. Reuters shall not be liable for any errors or delays in the content, or for any actions taken in reliance thereon.
Related News: Alexander Zverev, Stan Wawrinka, Dominic Thiem, Rafa Nadal, PHOTOS
SHARE THIS STORYCOMMENT
Print this article 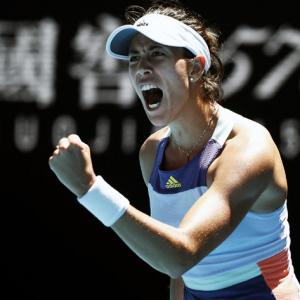