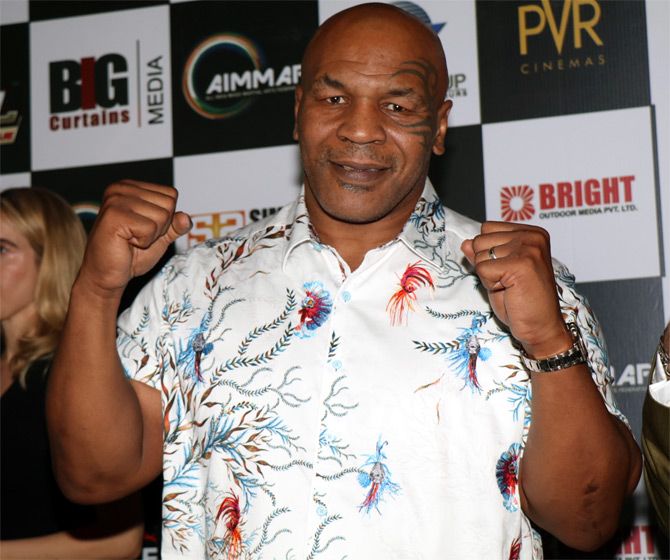 IMAGE: Mike Tyson during the launch of the Mixed Martial Arts League in Mumbai on Friday. Photograph: Hitesh Harisinghani/Rediff.com

Former world heavyweight boxing champion Mike Tyson, who in his prime was famously promoted as the baddest man on the planet, said that all good fighters have come out of the slums, including him.

"I think the poorer you are the better boxer you are. The most successful fighters have come from slums. All the fighters who come from the slums are successful. All the current top fighters are from the slums," said Tyson at the launch function of the Mixed Martial Arts league in Mumbai on Friday.

From personal experience the 52-year-old Tyson, who retired in 2005 with a record of 50 wins -- including 44 by knock-outs -- and six losses, said that if one works tirelessly that person can get out of the slums.

"I am a slumdog. I grew up in a slum. I had the ambition to get out of the slums and that's why I am here. If someone works hard they can get out of the slums. I still go back to see my friends in my old neighbourhood. They still call it a slum," said "Iron Mike" on his first visit to India.

Tyson, who at the age of 20 years, four months and 22 days became the world's youngest ever heavyweight world champion in boxing in 1988, has plans to visit one of Asia's biggest slums, at Dharavi in the central part of the city, besides the customary foreigner's visit to the Taj Mahal in Agra.

"I look forward to go into the slums and want to see the Taj Mahal as well," he declared.

"I am very excited to be here. This is my first time in India. This is something I never dreamed of before. I am here to launch the fight (between India and UAE to be held at the NSCI stadium on Saturday). I wish the best team wins," said Tyson.

"I am a big fan of MMA. I go to UFC (Ultimate Fighting Championship) in Las Vegas all the time," said Tyson, who had served a prison term early in his career after being convicted of rape. IMAGE: Mike Tyson speaks during the launch of the Mixed Martial Arts League in Mumbai on Friday. Photograph: Hitesh Harisinghani/Rediff.com

He was open in his remarks when asked whether he would have joined the MMA ranks if it was in existence during his fighting years.

"I don't know. They don't pay a lot of money in MMA... I would not have worked without money," he replied leading to peals of laughter.

Tyson marked out Lennox Lewis, Evander Holyfield and Buster Douglas as some of his toughest opponents inside the ring.

"There were quite a few - Lennox Lewis, Evander Holyfield, Buster Douglas. They were very good fighters," said Tyson, who was disqualified in his 1997 rematch against world champion Holyfield for biting his opponent's ear.

He favoured Anthony Joshua as currently the best boxer in the heavyweight category.

"I think it's Joshua right now. It's going to be an interesting fight between Joshua and (Deontay) Wilder," he remarked about a planned world title unification fight between the two boxers.

To the inevitable question on cricket he remarked, "I know cricket. I know you hit the ball with a stick. It's a bit like baseball, in a way."