The former world number one appeared pain free at the Albany course on the island of New Providence where he mixed five birdies with two bogeys for a three-under-par 69. 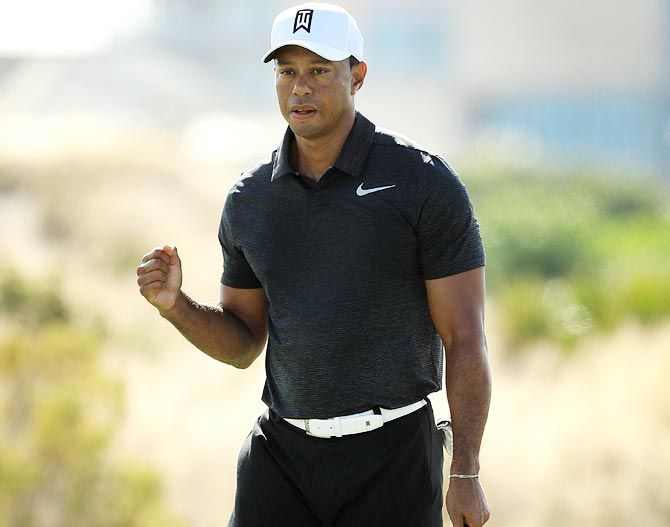 IMAGE: Tiger Woods reacts to his birdie on the eighth green during the first round. Photograph: Mike Ehrmann/Getty Images

Tiger Woods dazzled in his much-anticipated return from injury on Thursday at the Hero World Challenge in the Bahamas where the former world number one flashed a fist pump and did not seem bothered by his troublesome back.

Woods, competing for the first time after a near 10-month layoff during which he had spinal fusion surgery, appeared pain free at the Albany course on the island of New Providence where he mixed five birdies with two bogeys for a three-under-par 69.

That left him in a four-way share of eighth place and three shots behind Britain's Tommy Fleetwood after the first round of the elite 18-man event featuring eight of the world's top 10.

"I didn't know what I could do," Woods told Golf Channel. "I've been playing a lot of holes at home, but it's a little different when you have to tee it up in a tournament."

Woods, who two months ago said he was only hitting 60-yard shots, drove mostly well off the tee, made some solid putts and impressive par saves but at times also let out expletives and slammed his club in frustration.

Riding high after a pair of consecutive birdies, Woods was two shots off the lead at the par-five 15th hole when his tee shot sailed far right. He took a drop and went on to two-putt for his second bogey of the day.

From there he went on to close out with a trio of pars to cap a round that showed, perhaps, that the 14-times major champion still has plenty left. 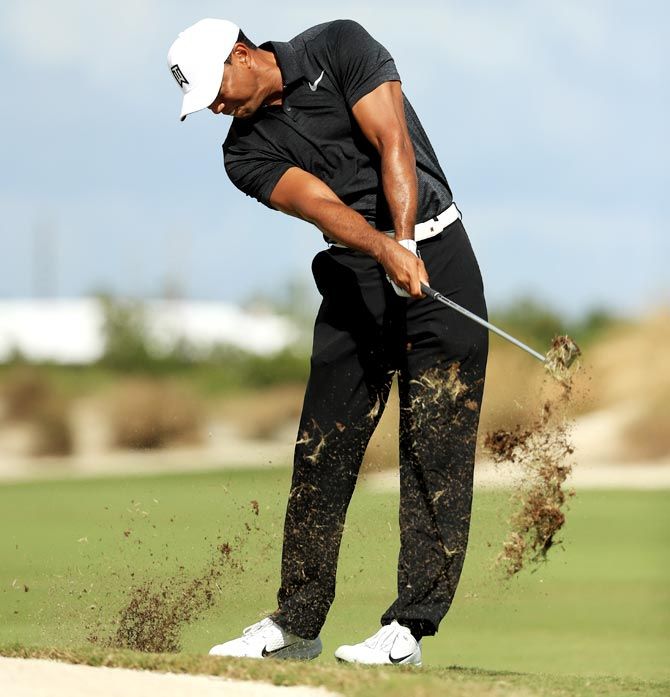 IMAGE: Tiger Woods plays a shot on the fourth hole during the first round. Photograph: Mike Ehrmann/Getty Images

After narrowly missing birdie putts on his opening two holes Woods hit his approach shot at the par-five third to about 40 feet and went on to tap in for birdie.

On the next hole Woods caught his chip heavy and was left with a 15-footer from just off the green from where he coolly rolled his ball into the middle of the cup for par before pumping his right fist to the delight of the cheering gallery.

Woods, who turns 42 on December 30, delivered a more subdued fist pump at the par-three eighth where he rolled in a 25-foot birdie putt after his tee shot settled on the edge of the green.

Playing alongside friend and FedExCup champion Justin Thomas, Woods, dressed in black with a white hat, showed his first bit of frustration at the par-five ninth when, after failing to reach the green in two, he made a mess of a chip.

Despite being about 30 feet from the cup after two shots Woods settled for his first bogey of the day to reach the turn in one-under 35.

Woods responded nicely with a birdie from 15 feet at the next hole. 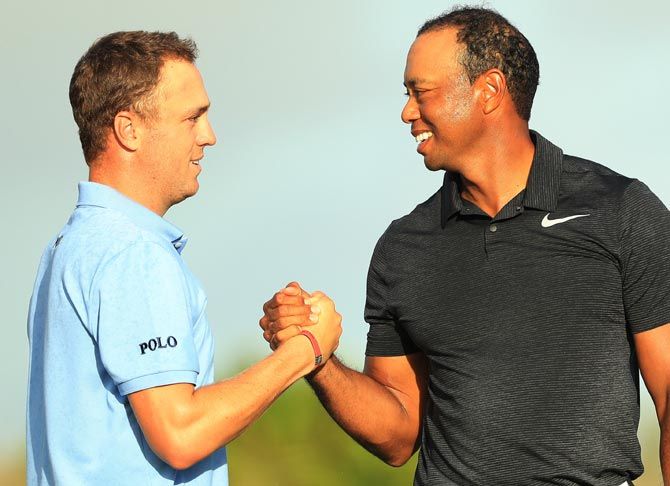 IMAGE: Tiger Woods shakes hands with Justin Thomas after finishing on the 18th green during the first round. Photograph: Mike Ehrmann/Getty Images

After his tee shot at the par-three 12th sailed wide right and into rough, Woods promptly slammed his club to the ground but quickly calmed down and delivered perhaps his best chip of the day to within four feet for a solid up and down.

He carried that momentum to the next hole where he rolled in his fourth birdie of the day, this time from 22 feet.

Woods laid up off the tee at the par-four 14th, then delivered a stunning wedge shot from 88 yards that settled about two feet from the cup, leading to his second consecutive birdie.

It appeared that Woods was about to make a charge to the top of the leaderboard at this point until his errant tee shot at 15 took the wind out of his sails.

"I felt rusty starting after a month and half (off) so I can't imagine what it felt like for him," said Thomas, who also carded a 69.

"He played well. I truly felt like he was going to play well just from when we played and then practice around here."

A 79-times winner on the PGA Tour who was world number one for a record 683 weeks, Woods lost form in recent years due to injuries and his ranking has plummeted to 1,199th.

This marks the second consecutive season that Woods has made his return to action at the tournament after a lengthy absence.

Woods then missed the cut at Torrey Pines in January and withdrew from the Dubai Desert Classic the following week because of a back spasm.