European champions Portugal spurned a two-goal lead against Tunisia, stumbling to a 2-2 draw, as France, one of the World Cup favourites, flexed their muscles with a comfortable 2-0 win over Ireland in warm-up friendlies on Monday.

Portugal were without captain Cristiano Ronaldo after he won the Champions League with Real Madrid on Saturday and Tunisia exposed defensive frailties in Fernando Santos' side which Group B opponents Spain, Morocco and Iran will try to exploit.

Andre Silva and Joao Mario fired Portugal ahead in Braga but Tunisia's speed on the counter-attack was a problem for the hosts. Anice Badri and Fakhreddine Ben Youssef pulled the African side level, proving they will be no pushovers for Group G favourites Belgium and England, as well as Panama.

France put in a strong performance in Paris, with goals from Olivier Giroud and Nabil Fekir not telling the complete story of their dominance against Ireland.

Antoine Griezmann, Paul Pogba and N'Golo Kante did not start but Giroud, Fekir and Corentin Tolisso impressed in their absence.

Coach Roberto Mancini began his Italy reign with a 2-1 win over Saudi Arabia and his former Manchester City striker Mario Balotelli opened the scoring on his return to the national team for the first time since 2014. 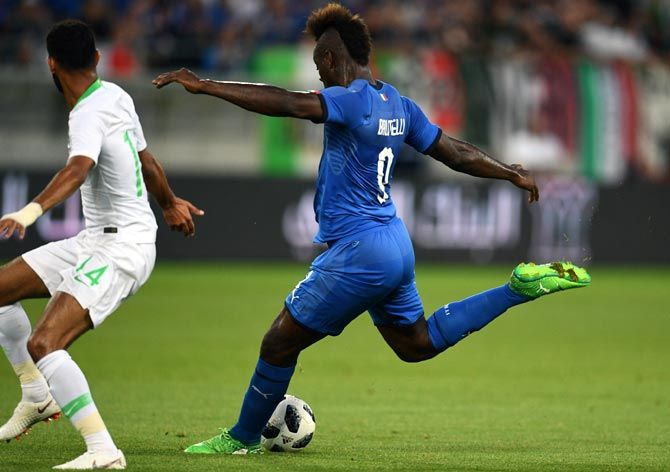 Italy failed to reach the World Cup but began a new era with Andrea Belotti adding a second goal, but Saudi Arabia hit back thanks to Yahya Al Sheri and could have grabbed a late equaliser.

Their revival gives them hope of competing well in World Cup Group A, where hosts Russia, Uruguay and Egypt await.

Iran suffered a blow to their confidence, losing 2-1 in Istanbul against Turkey, who have not qualified for the finals, Cenk Tosun scoring both goals for the home team early in each half.

Ashkan Dejagah netted from the penalty spot in the 92nd minute to give the visitors a consolation.

Iran, appearing in their fifth World Cup, will go to Russia hoping to advance for the first time to the knockout phase from Group B. Forward Son Heung-min lashed home from distance as South Korea beat Honduras 2-0 in Daegu, getting their preparations for Russia off to a good start.

Former Barcelona B midfielder Lee Seung-woo, now at Hellas Verona, impressed on his debut and pushed his claims to be included in coach Shin Tae-yong's final 23-man squad.

South Korea are underdogs in Group F, where they face Germany, Mexico and Sweden.

Nigeria were frustrated in a 1-1 draw with DR Congo in Port Harcourt which does not bode well for their challenge of qualifying from World Cup Group D which also includes Argentina, Iceland and Croatia.

Mexico fail to break down Wales

Mexico failed to turn possession and pressure into goals as they were held 0-0 by Wales in a World Cup warm-up at the Rose Bowl in Pasadena, California on Monday.

Mexico, who have been drawn in Group F alongside Germany, Sweden and South Korea at next month's tournament in Russia, created a host of chances but could not find a way past Wales goalkeeper Wayne Hennessey.

Brothers Giovani and Jonathan dos Santos put the Welsh goal under pressure in the closing stages after coming off the bench in the second half but could not beat Hennessey.

Wales, who missed out on qualification for the World Cup, were playing without Gareth Bale after he helped Real Madrid to the Champions League trophy on Saturday and managed just one shot on goal.

Mexico manager Juan Carlos Osorio, who has yet to name his final 23-man squad for the World Cup, will hope his side find their scoring touch when the face Scotland in another friendly at the weekend.