Sports events produce a multitude of highly amusing and crazy celebrations. Individual and team players have various way of celebrating victory, a goal or point. Some do it with a high-five, blow a kiss, cartwheel or dance. The latest on the soccer field.... a soccer ball baby!

Take a look at the photographs below and enjoy the moments. How did Spaniard Tommy Robredo react to throwing away five match-points at the Valencia Open and losing in front of his home crowd in an epic to Andy Murray?

Murray wasn’t astonished when his opponent showed him his middle fingers bending over the net. The gruelling battle at the cathedral-like Agora arena, at three hours and 20 minutes the longest final of the year on the ATP World Tour, was a repeat of last month's Shenzhen Open showpiece, when Murray fought off five match-points against the Spaniard on the way to a 5-7, 7-6 (9), 6-1 success.

After thumping a backhand winner to seal victory, the Scot, who squandered a match-point earlier in the third set, collapsed to the floor and barely had enough strength to get to the net to greet his equally exhausted opponent. Forget the goals, the half-chances missed. Former Germany striker Miroslav Klose celebrated with a somersault after scoring a record-equalling 15th World Cup goal and salvaging a 2-2 draw against Ghana in Brazil.

Klose, with his first touch of the game, poked home at the back post from a corner in the 71st minute to move level with former Brazil striker Ronaldo.

The somersault was back after he scored the equaliser from close range with his first touch less than two minutes after coming off the bench in a 2-2 draw in Group G.

"I don't know how long its been since I did a somersault, but at least it worked out," he said after the match. James Rodriguez (No. 10) of Colombia celebrates by dancing along with teammates after scoring his team's first goal against Ivory Coast. Photograph: Adam Pretty/Getty Images

This is another one from the FIFA World Cup. The Colombians not only score goals but also groove. Goals from James Rodriguez and substitute Juan Quintero gave Colombia a 2-1 victory over Ivory Coast, in Brasilia, on June 19.

The goals also sent the thousands of yellow-clad Colombia supporters thronging the national stadium in Brasilia into ecstasy. Is Joseph Joyce a boxer or gymnast? 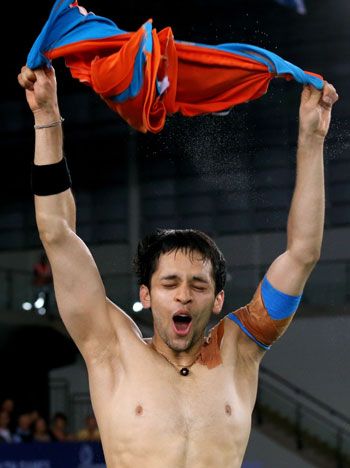 Parupalli Kashyap etched his name firmly in history books by becoming the first Indian male shuttler in 32 years to win a gold medal in the Commonwealth Games in Glasgow.

He joined badminton legend Prakash Padukone and the late Syed Modi, who won the title in the past.

Therefore, no one could stop him from doing a shirtless Salman Khan act! Sushil bagged gold in men's 75kg freestyle category. The 31-year-old wrestler, who won his first Commonwealth Games gold in the 2010 Delhi edition in the 66kg category, had a fan in a female wrestler from Canada. And she had a unique way of showing her affection for the Indian superhero, lifting him after the medal ceremony!. 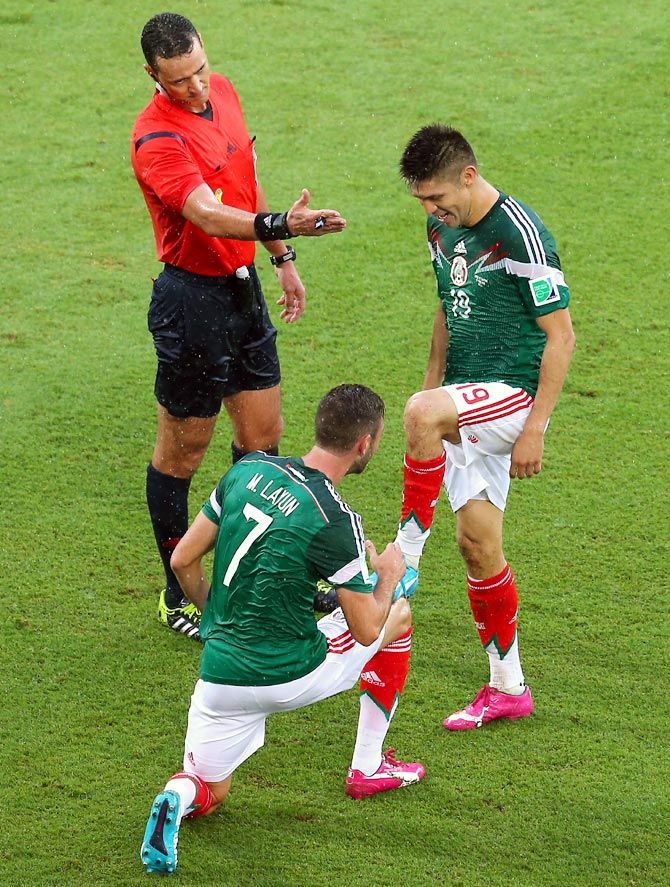 One of the most common and apt ways of celebrating a goal on the football field. Mexico were rewarded for their attacking intent when Oribe Peralta's 61st minute strike gave them a 1-0 win over Cameroon in their World Cup Group A match in Natal, on June 13. Peralta celebrates in style. Most celebrations in the IPL are over the top. Sometimes they look orchestrated, but how does it matter as long as the spectators enjoy them?

Sunrisers Hyderabad's Darren Sammy walked away with the most endearing celebration of IPL 6.

His 'pacifier sucking' stood out this season.

The 29-year-old West Indies captain was a treat to watch after reaching his fifty, his first in T20s. He took out a baby pacifier tied around his neck and sucked on it. If that was not enough, he had the spectators in splits when he brought his arms together for a cradling action to celebrate a dismissal. When it comes to flamboyance, can the profusely talented Chris Gayle be left behind?

Like his towering sixes, also a hit with the fans was his style of celebration -- Gangnam style, made popular by South Korean musician Psy. Tennis star Rafael Nadal is known for his habit of biting the trophies he wins. The Spaniard has amassed 11 Grand Slam titles.