Images from Day 2 of the French Open in Paris on Monday. 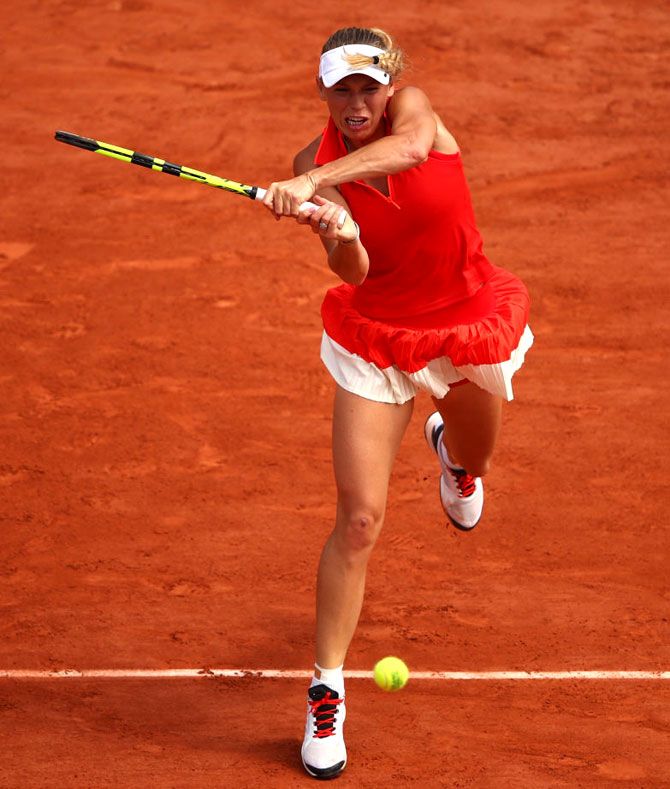 Big-hitting Australian teenager Jaimee Fourlis served up a major scare for Caroline Wozniacki at Roland Garros on Monday, making light of the 300-plus ranking places separating them to push the 11th seeded Dane to three sets.

Wozniacki, who appeared to be carrying the after-effects of a lower back injury that forced her to retire during last week's Strasbourg tournament, pulled away towards the end of a testy encounter, winning 6-4 3-6 6-2 in just over two hours.

Wildcard Fourlis, aged 17 and at 337 the lowest-ranked player in the main draw, was the stronger for much of the first two sets, keeping Wozniacki pinned at the back of the court with blistering drives off both wings.

But the Dane, making her 10th appearance at Roland Garros, showed her greater experience at key moments, winning both her breaks points in the opening set while the Australian converted just one out of five.

Playing her first French Open and only her second grand slam after reaching the second round of her home major in January, Fourlis refused to be overawed, keeping up a running commentary with her courtside entourage and the umpire.

Leading 4-1 in the second set, the Australian lost some of her focus after disputing a line call that went against her, dropping that game and the next. She recovered to break Wozniacki again before serving out to love to take the set.

But as Fourlis began to take issue with other calls, the Dane took control in the third. IMAGE: Garbine Muguruza waves to the crowd after winning her first round match against Francesca Schiavone. Photograph: Julian Finney/Getty Images

Returning to the stage of her greatest triumph inspired defending champion Garbine Muguruza to down 2010 winner Francesca Schiavone 6-2, 6-4 in the first round of the French Open on Monday.

The fourth seed, who had been woefully out of form in the run-up to Roland Garros, never looked in danger of joining Russian Anastasia Myskina as the only reigning women's champion to lose in the opening round of the claycourt major.

The Spaniard easily outclassed the skilful Italian with her poise and power in muggy conditions.

There were several top-notch rallies and Schiavone pulled a few tricks from her bag, threatening in the second set. However, she made too many unforced errors to sustain any form of challenge.

"I was so excited to play here against another champion. Francesca is a legend," Muguruza said courtside.

"I played my game, which means being aggressive and going forward." Muguruza raced to a 3-0 lead in the opening set and just when Schiavone was starting to work around her opponent's power as she reduced the arrears to 3-2, the match was interrupted for 10 minutes as a spectator was attended to by first-aiders.

The Spaniard won 19 of 20 points after play resumed and led 2-0 in the second set.

That is when Schiavone's game fell into place. She broke back and had two break chances in the sixth game, which Muguruza saw off confidently.

The champion then broke decisively for 5-4. Schiavone saved three match points but volleyed wide on the fourth. Canadian Raonic has made it to the quarter-finals in one of his five previous appearances in the competition.

Basilashvili will face Serbia's Viktor Troicki in the second round.

© Copyright 2021 Reuters Limited. All rights reserved. Republication or redistribution of Reuters content, including by framing or similar means, is expressly prohibited without the prior written consent of Reuters. Reuters shall not be liable for any errors or delays in the content, or for any actions taken in reliance thereon.
Related News: Garbine Muguruza, Francesca Schiavone, IMAGE, Anastasia Myskina, Roland Garros
SHARE THIS STORYCOMMENT
Print this article REVEALED! Why Djokovic decided to work with Agassi 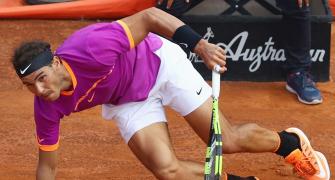 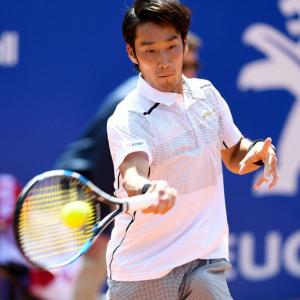 It took him 18 attempts to reach main draw of Slam Is she 'best player' on WTA Tour?