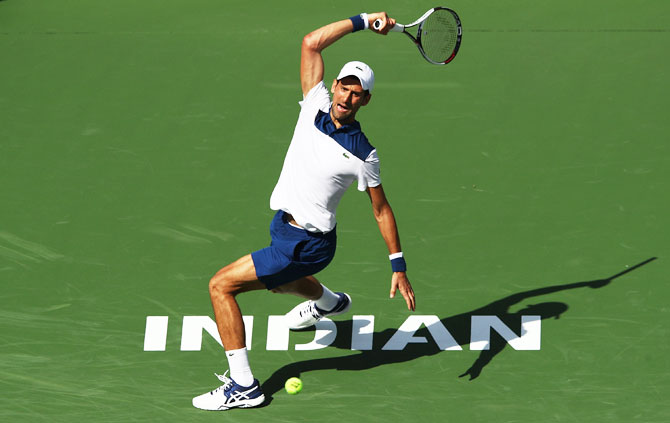 Novak Djokovic produced a puzzling performance as the former world number one lost to Japanese qualifier Taro Daniel in the second round at the BNP Paribas Open in California on Sunday.

On his return from right elbow surgery, Djokovic looked a pale shadow of his former self as he went down 7-6(3), 4-6, 6-1 to make a quick exit from a tournament he has won five times.

"It felt like the first match I have ever played on the tour, very weird," he told reporters.

"I just completely lost rhythm, everything, struggled a little bit with the health the last couple of weeks."

Djokovic took six months off after Wimbledon last year and returned in January's Australian Open where he lost in the fourth round. He had surgery in Switzerland shortly after that.

"I was grateful to be out on the court after surgery that quickly but at the same time just didn't feel good at all," he added.

"Nerves were there. I made so many unforced errors." 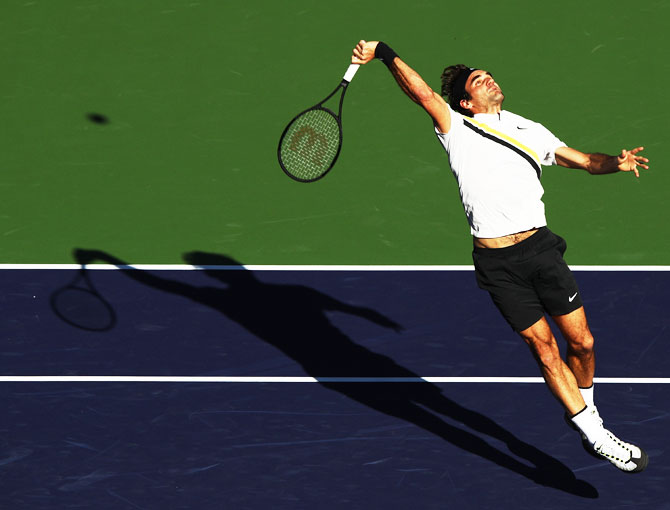 Djokovic's performance in the final set against the world's 109th-ranked player on centre court raised some eyebrows, with four-time grand slam champion Jim Courier saying the Serb had "capitulated".

"The question marks surrounding his defeat today will only grow larger," Courier said in commentary on the Tennis Channel.

"We wondered post surgery what it was going to look like, how his elbow was going to react to the strain and stress, but it was his heart and head that didn't react the right way in this match. That is as head scratching as anything you'll see."

Holder Roger Federer avoided the same fate as Djokovic, though the Swiss top seed was pushed by left-handed Argentine Federico Delbonis in a match that was completed on Sunday after being halted by rain at 2-2 in the second set the previous day.

"It's been a long time since I have been interrupted at night and have to come back the next day," said Federer.

"In the night-time, the ball is much more deader. The surface doesn't react so much." 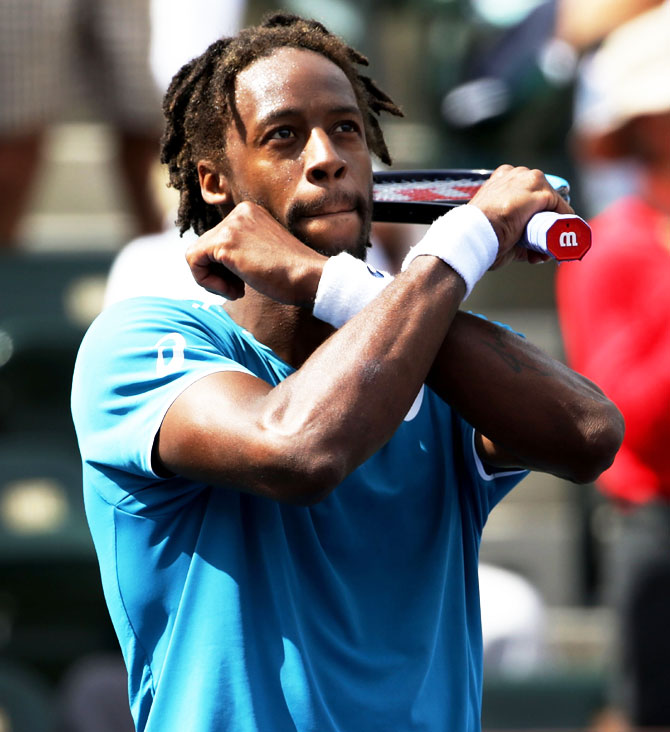 Frenchman Gael Monfils survived a match point before beating big-serving American John Isner 6-7(5), 7-6(3), 7-5 in a contest that had only one break.

Isner, the 15th seed, frittered away seven break points, while Monfils converted one of his three opportunities, which proved enough.

Yuki Bhambri of India pulled off a surprise when he toppled ninth-seeded Frenchman Lucas Pouille 6-4, 6-4.

In a stunning performance, the 110th ranked Yuki dispatched Pouille in one hour and 19 minutes.

The win is the biggest for the 25-year-old Indian and has ensured Bhambri 45 ranking points and US$47,170.

He will next take on American World No 21 Sam Querry, who ousted Germany's Mischa Zverev 6-4, 7-5.

Rohan Bopanna was ousted from the men's doubles in the first round with Edourad Roger-Vasselin.

"I was attacking when I had my chances and controlling most of the times the points," said Cilic. "I didn't serve too good today but overall I'm pleased." 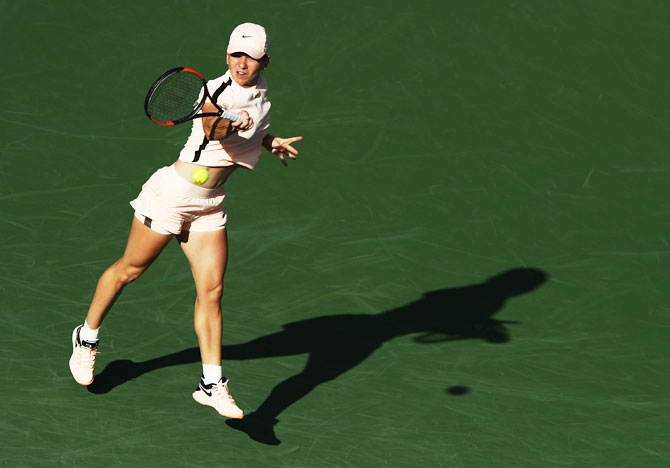 Top seed Simona Halep narrowly avoided an upset in the BNP Paribas Open third round on Sunday, digging deep for a 1-6, 7-6(3), 6-2 win over world No. 165 Caroline Dolehide, while 16-year-old Amanda Anisimova also advanced to the fourth round.

Romanian Halep was outplayed by American Dolehide in the first set at Indian Wells but slowly exerted her authority and, after surviving a second-set tiebreak, gradually wore down the tiring teen to secure victory.

It was another highly impressive performance by junior US Open champion Anisimova, who became the first 16-year-old to reach the fourth round since Viktoriya Kutuzova in 2005.

"I'm still in shock," Anisimova, who is ranked 149th in the world, told reporters.

Anisimova, born in New Jersey to Russian parents, has not dropped a set in three matches. She defeated 23rd seed Anastasia Pavlyuchenkova in the second round.

"I was enjoying the moment, but at the same time, I was trying not to make myself nervous because of the huge crowd, and everything, and the big stage," she said.

"I have been working on that a lot, just not showing any emotions, just fighting the whole time.

"I have been doing that really well these past two weeks." 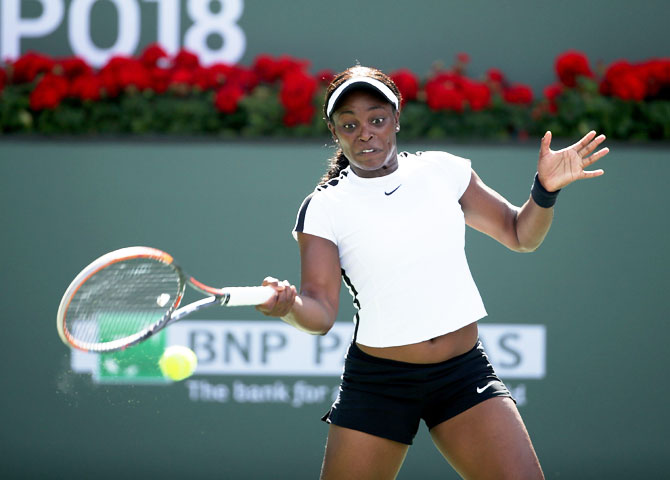 US Open champion Sloane Stephens enjoyed a satisfying second-round win over Victoria Azarenka, who beat the American three straight years at the Australian Open from 2013-15.

"These courts suit my game really well. I was super focused on just playing my game and making sure I was executing."

It was the first tournament in eight months for Azarenka, who has been involved in a custody battle over her 14-month-old daughter in California where she lives.

"Obviously a lot of work to do," said the Belarusian.

"For me, the most important is to have a clear head, which obviously right now is not.

"Once I figure all my stuff outside of the court, I'll be able to focus and be 100 percent when I'm on the court to be there."

Japan's Kei Nishikori said on Sunday he had withdrawn from the BNP Paribas Open at Indian Wells through illness.

"I have been sick for over a week and tried everything I could to get better," the world number 25 was quoted as saying on the tournament's Twitter account.

The only Japanese player ever to be ranked in the world's top five, Nishikori was due to face Argentine Leonardo Mayer in the second round on Sunday. He has been replaced by lucky loser Ruben Bemelmans of Belgium.

"I'm still not strong enough to go play a match," Nishikori said. "I'm very sorry as I love this tournament."

The 28-year-old had returned to play this winter after a five-month injury layoff due to a wrist injury.

© Copyright 2020 Reuters Limited. All rights reserved. Republication or redistribution of Reuters content, including by framing or similar means, is expressly prohibited without the prior written consent of Reuters. Reuters shall not be liable for any errors or delays in the content, or for any actions taken in reliance thereon.
Related News: Novak Djokovic, Roger Federer, BNP Paribas, IMAGE, Amanda Anisimova
SHARE THIS STORYCOMMENT
Print this article 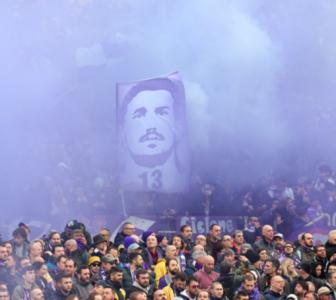 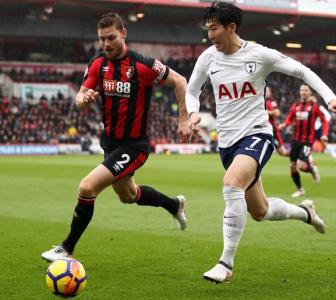