PHOTOS: Ali feted by the famous and fans in final farewell 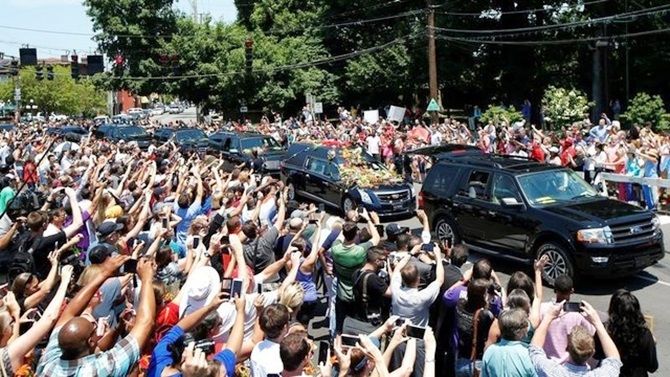 Religious and political leaders joined celebrities, sports stars and tens of thousands of ordinary people on Friday in bidding farewell to Muhammad Ali, the boxing champion who jolted America with his showmanship and won worldwide admiration as a man of conviction.

Ali, a once-controversial convert to Islam who lost three prime years of his boxing career for refusing U.S. military service during the Vietnam War, died a week ago at age 74 as one of the most respected men in the United States.

"What does it say of a man, any man, that he can go from being viewed as one of his country's most polarizing figures to arguably its most beloved?" sportscaster Bryant Gumbel told an interfaith memorial service with 15,000 people in a sports arena in Ali's hometown of Louisville, Kentucky.

Wife Lonnie Ali, former US President Bill Clinton and leaders from an array of religions eulogized a man who went from Olympic gold medal winner in 1960 to three-time heavyweight champion to an elder statesman suffering from Parkinson's disease. Earlier in the day, an estimated 100,000 people came out to honour Ali on a hot and sunny day, chanting his name and throwing flowers along the route of a 23-mile (37-km) funeral procession unlike any other in recent US history.

After the popular outpouring on the streets, the stage was turned over to religious leaders, friends and family who remembered the former Cassius Clay, a brash African-American man who shocked America by converting to Islam and changing his name in 1964.

"If Muhammad didn't like the rules, he rewrote them," Lonnie Ali told the service. "His religion, his name, his beliefs were his to fashion, no matter what the cost."

Clinton saluted Ali as a "universal soldier for our common humanity."

"He decided at a very young age to write his own life story. He decided he would never be disempowered," Clinton said. The ceremony proved to be a rare combination of politics, sports, entertainment and religion, a testimony of Ali's impact on so many aspects of life.

The crowd cheered its political support for Clinton's wife, the presumptive Democratic presidential nominee Hillary Clinton, when Rabbi Michael Lerner, editor of the Jewish interfaith magazine Tikkun, made a rousing reference to her candidacy.

Lerner also took a swipe at Donald Trump, the presumptive Republican presidential nominee, who has called for a temporary ban on foreign Muslims entering the country.

"We will not tolerate politicians or anyone else putting down Muslims and blaming Muslims for a few people," said Lerner. IMAGE: Lonnie Ali, the wife of Muhammad Ali, speaks at a memorial service for the late boxer in Louisville, Kentucky, US. Photograph: Lucas Jackson/Reuters

Adding levity to the service was Billy Crystal, who reprised bits of his trademark comedy routine in which he imitates Ali and sportscaster Howard Cosell, an important early supporter of Ali during his most polarizing years.

"Only once in a thousand years or so do we get to hear a Mozart, or see a Picasso, read a Shakespeare. Ali was one of them," Crystal said. "And yet, at his heart, he was still a kid from Louisville who ran with the gods and walked with the crippled and smiled at the foolishness of it all. He is gone, but he will never die." Hours before the indoor ceremony, some 1,500 people gathered outside Ali's boyhood home in a traditionally African-American section of town, awaiting the procession. As Ali's hearse arrived, police standing shoulder-to-shoulder cleared a path, much like a fighter's entourage clears his way to the ring.

The hearse stopped at the pink house as the people, many of whom waited in the sun for more than three hours, chanted his name.

"It was important for me to be here," said Matt Alexander, 63, who travelled from Florida. "I cried like a baby when I heard he'd died. I just didn't want to believe it because I wanted him to live forever." 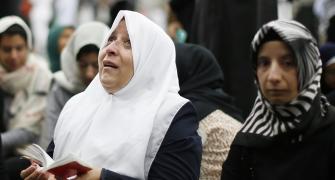 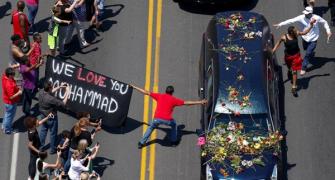 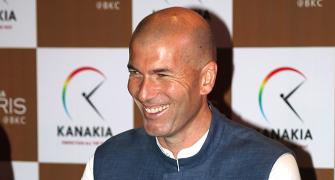 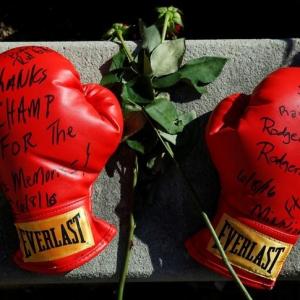