In twist, Chinese divers get engaged on Olympic medal stage 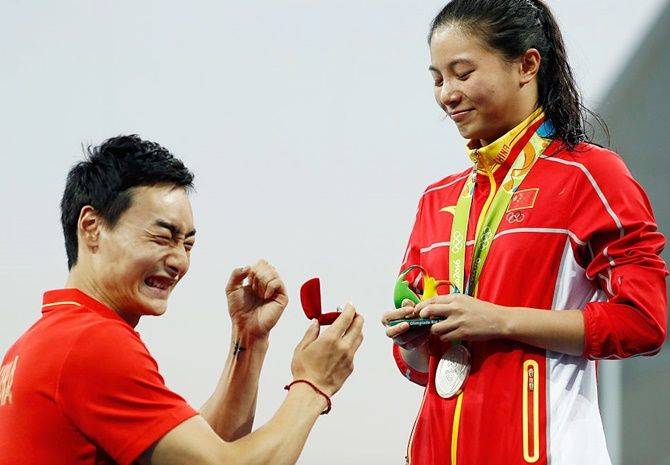 IMAGE: Chinese diver Qin Kai proposes to silver medalist He Zi of China on the podium during the medal ceremony for the Women's Diving 3m Springboard Final on Day 9 of the Rio 2016 Olympic Games. Photograph: Clive Rose/Getty Images.

China's He Zi received the shock of her life when team-mate and boyfriend Qin Kai rushed up with a diamond ring during the medal ceremony of the women's 3 metre springboard event, marking the second marriage proposal of the Olympics.

Qin, who won a bronze medal in his own synchronized diving event last week, climbed up to the stage after He received her silver medal, getting down on one knee while holding a red box with the ring and a glass-encased rose. 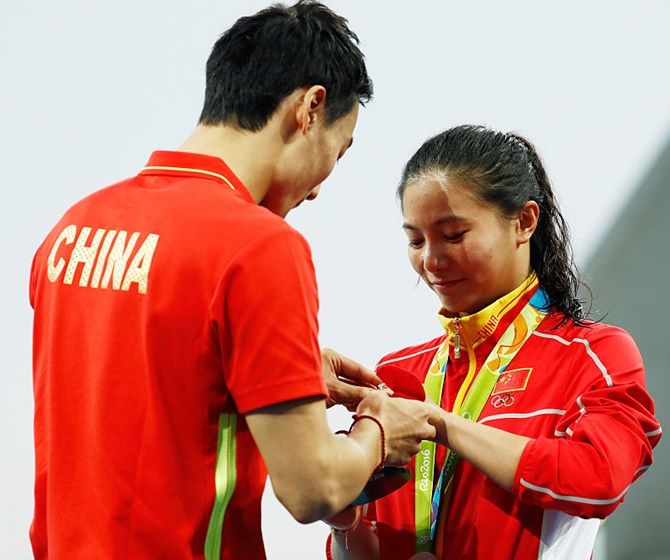 "I didn't know he would propose today and I didn't expect myself to marry myself out so early," said He, who tearfully accepted the proposal with a big hug.

"I saw him during the afternoon and he seemed to be memorising something, so I asked him 'what are you doing?' and he said he was singing," she told reporters.

"I've forgotten most of what he's said (during the proposal), but it's largely what you can expect like promises, but what touched me the most is that he said he was willing to be bullied by me for life," she said.
The 25-year-old has been dating the 30-year-old Qin for the past six years, she added. 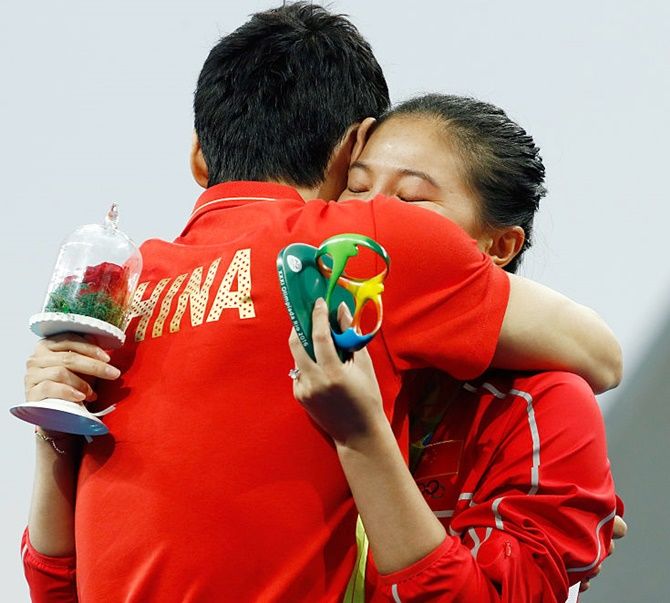 Shi Tingmao, speaking to reporters after her gold medal win in the same event, said she had knew about the proposal before the event, which Qin watched from the sidelines with the Chinese team.

"I'm really happy for them, because these years, be it career or relationships-wise, they have had to face a lot of pressure," she said.

The engagement is the second of the Games, after Brazilian women's rugby player Isadora Cerullo accepted a marriage proposal from her girlfriend at the medals ceremony for the first Olympic rugby sevens competition last week.