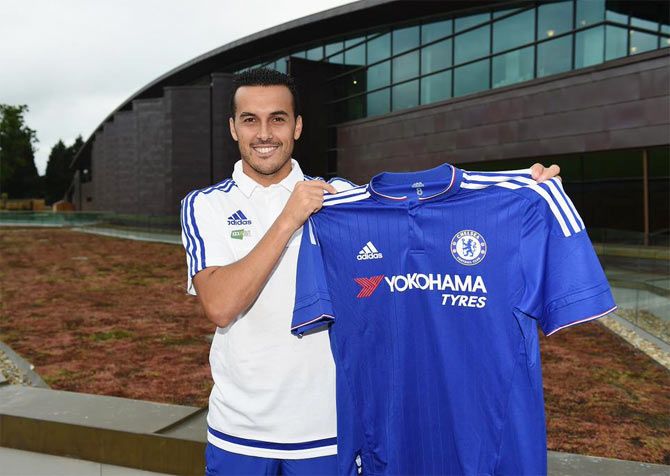 IMAGE: Pedro strikes a pose with the Chelsea shirt after his transfer from FC Barcelona earlier this season. Photograph: Twitter.

Spain midfielder Pedro has no regrets over leaving Barcelona in search of more playing time, despite failing to nail down a regular starting berth in his debut season at Chelsea.

Consigned to life on the fringes of the starting side at the Nou Camp, Pedro joined the Blues in August and scored seven goals in 29 Premier League appearances as he struggled to adapt to life in England.

Chelsea mounted a dismal defence of their title this season, finishing 31 points behind winners Leicester City in 10th place, while serial champions Barcelona won their sixth La Liga title in eight years when they beat Granada 3-0 on Saturday.

"I am really happy here and have no regrets about the decision I made to join Chelsea," the 28-year-old Pedro told British media.

"Is the best still to come from me? Absolutely. I always keep faith in myself and my abilities."

Pedro, who was named in Spain's provisional squad for Euro 2016 earlier this week, backed Chelsea to come back strongly next season.

"I am already looking forward to next season in terms of what we can achieve and putting the club back where it should be," he added.

"I'm really looking forward to fighting for the Premier League, which will be a dream for me."