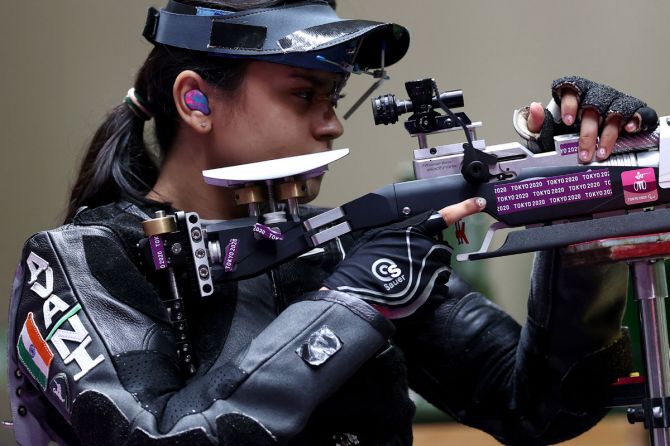 IMAGE: Avani Lekhara finished a disappointing 27th, with a score of 629.7, and bowed out in the qualification round of the mixed 10m Air Rifle Prone SH1 event at the Tokyo Paralympics on Wednesday. Photograph: Dean Mouhtaropoulos/Getty Images

Shooter Avani Lekhara, who became India's first female gold medallist at the Paralympics two days ago, failed to replicate her success and crashed out in the qualification round of the mixed 10m Air Rifle Prone SH1 event at the Tokyo Games, on Wednesday.

The SH1 (Rifle) allows individuals with no impairment in the upper limbs, but impairment in either/both the lower limbs to compete.

Lekhara finished a disappointing 27th with a score of 629.7 and crashed out in the third round.

The other Indian para shooters in the men's event, Sidhartha Babu and Deepak Kumar had a horrible outing, finishing 40th and 43rd respectively with scores of 625.5 and 624.9, at the Asaka Shooting Range.

The gold in the event was won by Germany's Natascha Hiltrop, while silver and bronze were bagged by South Korean Park Jinho and Ukraine's Iryna Schetnik respectively.

Lekhara, who sustained spinal cord injuries in a car accident in 2012, finished with a World record equalling total of 249.6, a new Paralympics record.

World number one shuttler Pramod Bhagat made an impressive start to his campaign in the men's singles, but young Palak Kohli endured a tough day at the Tokyo Paralympics, on Wednesday.

The 33-year-old, who contracted polio during his childhood, will next face Ukraine's Oleksandr Chyrkov, on Thursday.

Manoj will meet Chyrkov on Friday.

"Manoj Sarkar pushed me to the limits. He played really well and we know each other's game very well. We had some good rallies. I am happy with the way I went ahead with my game; obviously, these are initial matches and I am getting used to the arena," Bhagat said.

"I am in a good headspace. Chyrkov is also good and I hope I put up a good show tomorrow."

Earlier, Kohli had a difficult day in office, losing both her women's singles and mixed doubles matches.

Kohli, whose left arm is under-developed since birth, will next take on Turkey's Zehra Baglar on Thursday.

Kohli and Bhagat had earlier gone down fighting to second seeds Lucas Mazur and Faustine Noel in the mixed doubles Group B opener.

Talking about the match, Bhagat said, "We started very slow, we had our chances which we didn't capitalise on. Our second game is on Friday; it’s a do or die game and am sure we will put up a better fight and make sure we win the game."

The Indian pair found the going tough initially, trailing 5-11 at the interval. Things did not change much after the breather as the French duo zoomed ahead and quickly pocketed the opening game.

In the second game, the Indian duo gave a better account of themselves as they fought tooth and nail and earned a slender two-point lead at 13-11.

Mazur and Noel grabbed a point but the Indian pair reeled off seven straight points to reach the game point. Their opponent saved two points before Bhagat and Kohli roared back into the contest.

In the decider, the second seeds opened up a 13-9 lead, but Bhagat and Kohli fought their way back to take a 15-14 lead.

However, Mazur and Noel soon grabbed the lead and eventually edged out the Indian pair.

The Thailand pair of Siripong Teamarrom and Saensupa Nipada is the third team in the Group B.

India's para swimmer Suyash Jadhav endured a disappointing outing in the men's 100m breaststroke SB7 final of the Paralympic Games after he was disqualified for a rule violation on Wednesday.

Jadhav, who won a gold in Asian Para Games in 2018 along with two bronze medals and a silver in the 2016 German Swimming Championship, was disqualified as he didn't comply with World Para Swimming's rule number 11.4.1, which states that "at any time prior to the first breaststroke kick after the start and after each turn, a single butterfly kick is permitted."

The 27-year-old Jadhav, whose two hands were amputated below the elbow at the age of 11 due to electrocution, was found to have "performed more than one fly kick after the turn".

The gold in this event was won by Serrano Zarate CD of Columbia with a personal best timing of 1:12.01s.

The silver and bronze were bagged by Egor Efrosinina of Russian Paralympic Committee (RPC) with a timing of 1:16.43s and Australia's Blake Cochrane, who clocked 1:16.97s respectively.

Swimmers in S7 class have limited leg function or are missing a leg or parts of both legs, or have amputations and cerebral palsy. SB stands for breaststroke.

Jadhav had missed out on his first event -- the 200m individual medley SM7 -- on Friday as he was suffering from cold and sore throat. He will compete in the 50m butterfly S7 event on Friday.