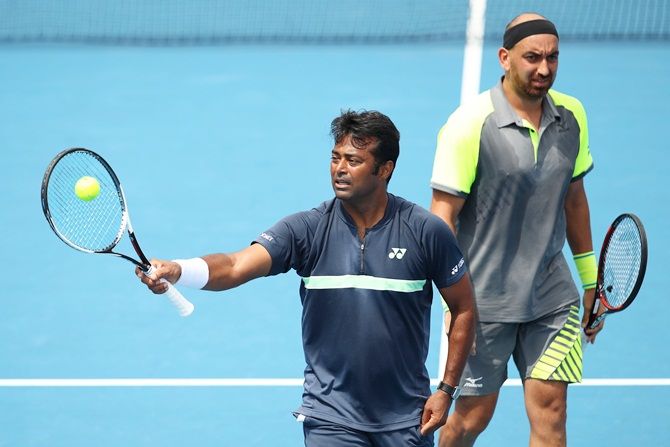 Leander Paes and Purav Raja were no match for Colombia’s Juan Sebastian Cabal and Robert Farah in the pre-quarter-finals of the men’s doubles at the Australian Open on Sunday.

The unseeded Indians were beaten 1-6, 2-6 by their 11th seeded opponents in 69 minutes.

Paes-Raja failed to capitalise on any of the five break-points -- two in the first set and three in the second -- they got in the match, while the Cabal-Farah duo converted four out the 10 they had.

The Colombians broke twice in both sets to easily win and make it to the quarter-finals.

The Indian pair had shocked formidable fifth seeds Bruno Soares and Jamie Murray in the second round.

Paes and Raja, who won two Challenger level titles to close the 2017 season, were playing in their second Grand Slam together.

Paes has not featured in the quarter-finals of a Grand Slam event for more than a year. The last time the 44-year-old veteran played a quarter-final at a Grand Slam was in 2016 at French Open, where he and Marcin Matkowski lost to Mike and Bob Bryan.