India's Leander Paes and Elena Vesnina of Russia fought their way to the mixed doubles semi-finals of the French Open with a thrilling 4-6, 7-5, 10-5 victory over Max Mirnyi of Belarus and American Liezel Huber.

The fifth seeds took a little over one and a half hours to prevail over the Belarusian-American combine. Paes and Elena will next take on Poland's Klaudia Jans-Ignacik and Santiago Gonzalez of Mexico in the final four.

Max and Liezel rode on their better first serve winning percentage and broke the Indo-Russian combo twice out of the three opportunity to have their nose ahead in the first set.

However, Paes and Elena bounced back in the second set breaking their rivals twice out of the four opportunities that came their way. Max and Liezel paid the prize for failing to convert three of the four break point chances.

In the end, the Indo-Russian pair saw off their rivals 10-5 in just a 10-minute tie-breaker. 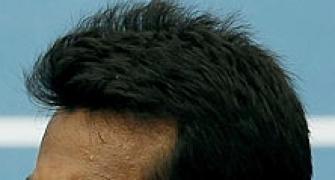