Leander Paes and Mahesh Bhupathi are on course for their maiden Australian Open title together as they advanced to the semi-finals after a hard-fought victory over the combine of Michael Llodra of France and Nenad Zimonjic of Serbia in Melbourne on Wednesday.

The third seeded Indian pair, who teamed up together after nine years in a bid to add the only Grand Slam title missing in their cupboard, needed 91 minutes to beat Llodra and Zimonjic 6-4, 6-4, in a quarter-final match at Melbourne Park.

Llodra and Zimonjic had beaten the 'Indo-Pak Express' pair of Rohan Bopanna and Aisam-Ul-Haq Qureshi in the pre-quarterfinals. 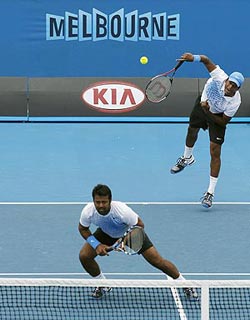 Paes and Bhupathi kept their mistakes to the minimum while their eight seeded opponents committed 13 unforced errors. The Indian duo had just five unforced errors which made a difference in the tie.

The Indians won more points from rallies as they found their opponents better in service. Llodra and Zimonjic fired nine aces while Paes and Bhupathi had just two against their names.

Paes and Bhupathi will now meet the winner of the quarter-final between the Polish pair of Mariusz Fyrstenberg and Marcin Matkowski and the second seeded combine of Max Mirnyi (Belarus) and Daniel Nestor (Canada). 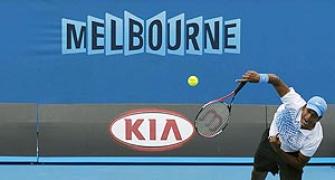