Adding to the joy of India's World Cup triumph, tennis players Leander Paes and Mahesh Bhupathi won their second title of the season, clinching the Sony Ericsson Open in Miami, to become number one in the ATP World Tour Doubles Team Rankings.

Paes had, in fact, won the title even last year, partnering Lukas Dlouhy, but for Bhupathi it was his first career title at Crandon Park.

"The key (to us winning) was just fighting as a team. Like Leander said, we didn't play our best match of the week. All four of us were tentative in the beginning," Bhupathi told sonyericssonopen.com.

The 'Indian Express' duo was up 6-5 in the first set but let it slip by conceding a break and never had a lead in the tie-break. 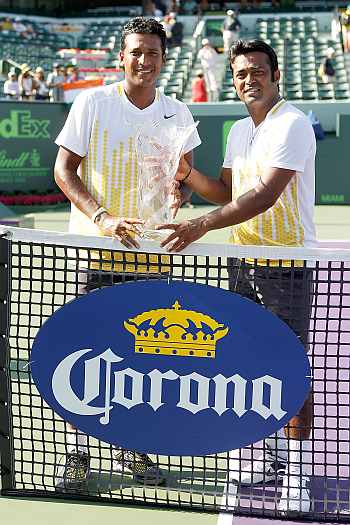 "We had a chance to win that set but we didn't take it -- threw away the breaker pretty much," Bhupathi said.

Bhupathi and Paes found their rhythm in the second set and were also helped by a double fault by Nestor in the fourth game. That enabled the Indians to take a 3-1 lead and they never looked back after that.

"My level dropped after the first set. We didn't get enough balls in play and they served better as the match went on. Max played well, so I feel bad about that. But we played against a tough team today," Nestor admitted.

The win takes the Indians ahead of World number one Bob and Mike Bryan for first place in the ATP Doubles Team Rankings and in the battle to qualify for the Barclays ATP World Tour Finals.

It is Paes and Bhupathi's second team title of the year, following the Chennai Open at the start of the season.

"It's still early for us. The season is broken down into four segments -- this is just the first of them. If we're still No. 1 after the US Open, then we'll start getting excited," said Bhupathi.

Paes finished runner-up to Nestor and Zimonjic with Lukas Dlouhy last year at the French Open, after he and the Czech won it in 2009.

"We love playing on the dirt. We got a month off now to get ourselves physically fit and get ready for a lot of long matches on the clay," Paes said.

"The clay definitely helps us because we train so hard for it over the years but at the same time there are a lot of singles guys who play well on the dirt too. At the French Open, I think it's one of the hardest slams to win, but if we're physically right, I think it will be good," he added.