'For the first time a para-athlete has been chosen for the honour and I want to thank Prime Minister Narendra Modi. He has a vision for para-athletes and has taken care of their requirements.' 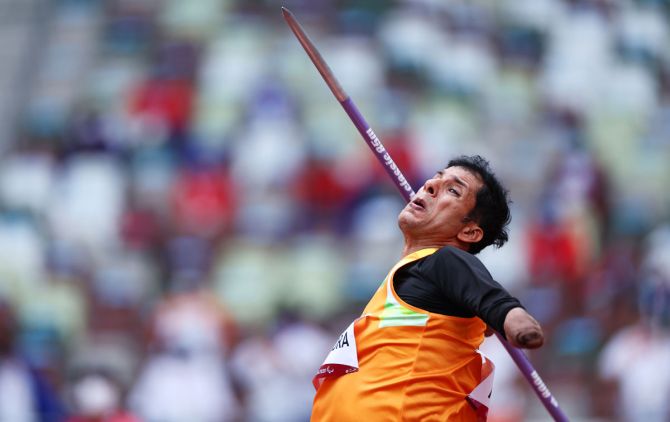 IMAGE: Devendra Jhajharia won two gold medals at the 2004 and 2016 Paralympics and a silver at the 2020 Tokyo Games. Photograph: Athit Perawongmetha/Reuters

The first para-athlete to be bestowed with the Padma Bhushan, Devendra Jhajharia says the "huge honour" will help change the attitude of society towards the differently abled and motivate them to strive for excellence.

The multiple Paralympics gold medallist and world champion was on Tuesday named for the prestigious Padma Bhushan, the third highest civilian honour in the country.

"It's not just huge for para-sports but also for the disabled community. The perspective of society towards para-athletes has changed and people must be happy for them now," Jhajharia told PTI Bhasha in an interview.

"For the first time, a para-athlete has been chosen for the honour and I want to thank Prime Minister Narendra Modi. He has a vision for para-athletes and has taken care of their requirements.

"I want to thank him on behalf of the entire para community."

In the country's best ever show at the Tokyo Paralympics, India won 19 medals, including five gold.

Apart from Jhajharia, javelin throwers Neeraj Chopra, who won a historic gold at the Tokyo Games, and Sumit Antil have been chosen for the Padma Shri honour.

Jhajjaria said for the javelin throwers, it is a great achievement.

"They deserved it. it's huge honour for javelin throwers. it will inspire youngsters to take up the sport."

Jhajharia, who lost his arm due to electrocution at the age of eight after a fall from a tree, said para sports have undergone a sea change in the last two decades.

"The start of the journey was full of challenges. People said how much a handicap can play? But now people say, ‘become like Devendra Jhajharia’. In 2004 I had to spend money from my own pocket to compete but now we have all the facilities."

He dedicated the honour to his late father, who died in October 2020.

"It was my father's dream that I become a big athlete. He sacrificed a lot but, unfortunately, he is not here now to see this. I dedicate it to him."

Jhajharia had bagged a gold medal each at Athens 2004 and Rio 2016. He could not participate at Beijing 2008 and London 2012 as his event was not listed in the Paralympic programme. But with a Tokyo Paralympic medal, Jhajharia became the most decorated Indian para-athlete ever.