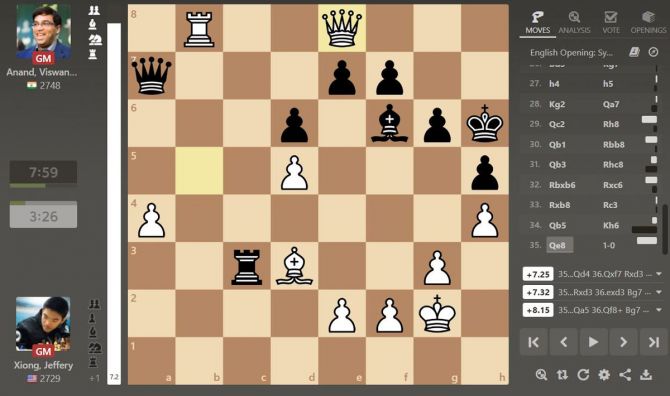 IMAGE: The United States team beat India in the second and the Blitz tie-break 4.5-1.5 in the semi-final of the FIDE Online Chess Olympiad on Tuesday. Photograph: International Chess Federation/Twitter

The United States team fought back brilliantly after being trounced in Round 1 by India to win the second and the Blitz tie-break 4.5-1.5, emerging victorious in an exciting semi-final in the FIDE Online Chess Olympiad on Tuesday.

The Americans bounced back strongly after being outclassed in Round 1 by winning the second 4-2 to force a Blitz tie-break to decide the winner.

In the tie-break, Jeffrey Xiong, Ray Robson, Irina Krush and Thalia Cervantes Landeiro registered wins to set up a stunning 4.5-1.5 win for the US.

Harikrishna, playing on the top board in place of Viswanathan Anand, went down in 35 moves to Xiong, who had earlier shocked India's No 1 Anand in round 2.

Adhiban Baskaran, who had done the star turn in India's tie-break win over Ukraine on Monday, had no such luck on Tuesday as he was beaten by Robson.

Vaishali Rameshbabu could not make much of an impression and went down to Cervantes Landeiro, while the country's top woman player Koneru Humpy's defeat at the hands of Krush crushed India's hopes.

Harika Dronavalli won all her three matches on Tuesday but it could not help India advance to the summit clash.

In round 2, Xiong was the star for the US as he shocked former World champion Viswanathan Anand, while Robson Ray pulled off an important win over Vidit Gujrathi, playing on the second board in place of Pentala Harikrishna.

Awonder Liong secured a crucial point by getting the better of Rameshbabu Praggnanandhaa. Harika continued her good run by beating Nazi Palkidze, while Humpy and Vaishali drew against Irina Krush and Thaila Cervantes Landeiro, respectively.

Riding on Vaishali's victory to open the scoring, Anand-led India romped to a 5-1 win in the first round.

In the Harika vs Zatonskih match, the Indian player defended a difficult position before cashing in on an error by her opponent.

Humpy drew with Irina Krush, while the young Nihal Sarin held Awonder Liang to a draw.

The US will face Russia who got the better of China in Wednesday's final.