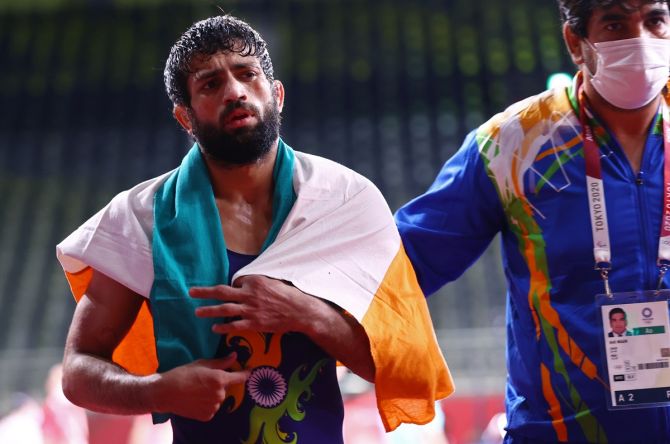 Ravi Dahiya and Neeraj Chopra made up for the disappointment of India’s women’s hockey team’s defeat in the semi-finals to Argentina with heartening performances in men’s wrestling and javelin throw at the Tokyo Olympics on Wednesday.

While Dahiya powered into the final of the 57kg Freestyle final and ensured India a fourth Olympics medal, Chopra turned on the style to script history by qualifying for the final with his first throw in the javelin competition.

Dahiya will fight it out for the gold medal on Thursday, while Chopra will stake claim for India's maiden track-and-field Olympics medal on Saturday.

Here’s how the country’s athletes performed at the Games on Wednesday.

Neeraj Chopra qualified for final by topping qualification round in men's Javelin Throw.

Shivpal Singh finished 12th in Group B qualification and 27th overall in men's Javelin Throw; failed to advance to final.

Aditi Ashok is at tied second after Round 1 in women's Individual stroke play.

Diksha Dagar is at tied 56th after Round 1 in women's Individual stroke play.

Anshu Malik lost to Belarus’s Iryna Kurachkina in first round of women's Freestyle 57kg; will play in Repechage round.