Chinese Olympics swimming champion Sun Yang will spend seven days in detention, state media said on Monday, after a car he was driving without a licence collided with a bus in the latest incident to taint the reputation of the world record holder.

Sun was not injured in the Sunday afternoon accident in the eastern city of Hangzhou, the state-run Xinhua news agency reported.

Police have given him seven days of "administrative detention" -- which means he will be held in a detention centre -- and an unspecified fine, Xinhua said, citing Hangzhou police. It provided no other details. 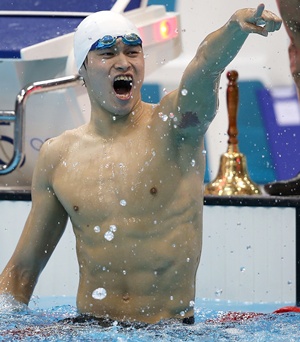 Olympic champion in London last year at the 400 and 1500 metre freestyle events, Sun had earlier taken to his Sina Weibo microblog to say sorry.

"I should have been a role model as an athlete and a public figure but I failed my responsibility," Sun wrote on the popular Twitter-like platform.

"I am deeply sorry for what I have done and will reflect on my behaviour. Because I have been focusing on training and competition, I had only a hazy knowledge of the law, which led to my mistake," he added.

"After this incident, I will strengthened my knowledge and study of the law to prevent such a thing from happening again. I hope that everyone will take this as a warning and give me an opportunity to correct my mistake."

Xinhua reported that Sun was driving a Porsche Cayenne SUV he said he had borrowed from a relative when a bus hit him from behind.

Hangzhou police then discovered he could not produce a driver's license, the report added.

"After looking into the system, we did not find any record of his license. Sun admitted he did not have one," an unnamed Hangzhou police officer was quoted as saying.

Sun could be fined up to 2,000 yuan and may face up to 15 days detention, the report added.

Sun shot to fame after becoming the first Chinese man to win an Olympic swimming gold medal, transforming him into one of the country's most sought-after sportsmen.

While Sun, like other Olympic champions, is a popular sports figure in China, this is not the first time he has been in trouble, with Xinhua noting his "stained" personal life, including gossip about his love life and clashes with reporters.

In February he was suspended from all commercial activities for breaching a "series of team rules". According to Xinhua, Sun had fallen out with his long-time coach Zhu Zhigen who felt the swimmer had too many commercial obligations.

"After a fallout with his coach, Sun is in the news again.

Why was him again?" commented Chinese portal Sohu on its sports page.

"A question mark is hanging over public figures - how should they behave themselves?"

How the country's elite behave is a sensitive topic in China, where the government has been trying to fight public anger at the perception that the richer and more privileged a person is, the less likely it is they will be punished for breaking the law.

Reaction on Weibo, where Sun's crash was the third most commented on topic on Monday, was broadly critical.

More than 4,000 people agreed on a Weibo poll that Sun should be punished, while 700 believed he should be let off.

"Stars should be treated like ordinary people by the law," wrote one commenter.

© Copyright 2020 Reuters Limited. All rights reserved. Republication or redistribution of Reuters content, including by framing or similar means, is expressly prohibited without the prior written consent of Reuters. Reuters shall not be liable for any errors or delays in the content, or for any actions taken in reliance thereon.
Related News: Sun Yang, Xinhua, Sina Weibo, SUV, China
SHARE THIS STORYCOMMENT
Print this article