Modi had shown that good things can be done in politics: Dutt 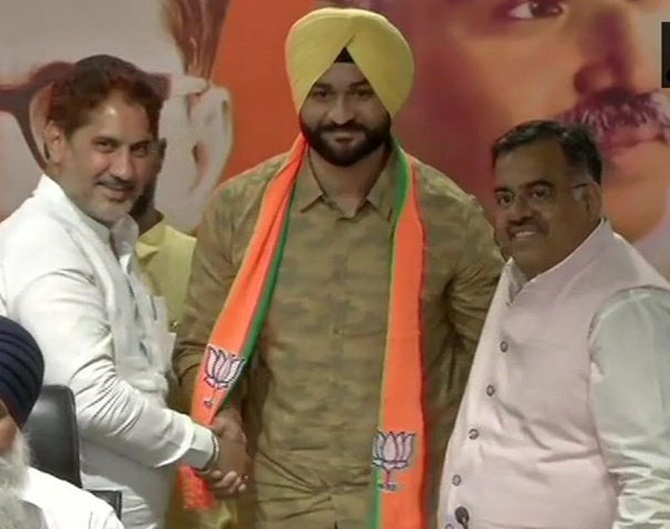 Olympic medallist wrestler Yogeshwar Dutt, former Indian hockey captain Sandeep Singh and Akali Dal MLA Balkaur Singh joined the BJP on Thursday amid indications that the saffron party will field them as its candidates in the October 21 Haryana assembly polls.

Inducting them into the party, Haryana BJP president Subhash Barala praised the two sportspersons for their contribution to the country and asserted that their presence will help the party in achieving its mission of winning more than 75 seats in the 90-member state assembly.

Dutt, an Indian freestyle wrestler from Haryana who won the bronze medal in the 60 kg category at the 2012 Summer Olympics, said he has long been impressed with the policies of Prime Minister Narendra Modi and the decision to nullify Article 370, which accorded special status to Jammu and Kashmir, has triggered a 'new revolution'.

Modi had shown that 'good things can be done in politics', added Dutt. He was awarded the Padma Shri in 2013 and won a gold medal at the 2014 Commonwealth Games. Echoing his view, Sandeep Singh said he will now serve the country in politics after doing so as a sportsperson.

The former captain of the Indian national hockey team was seriously injured when he was accidentally shot in 2006 while on his way to join the national team which was due to leave for the World Cup in Africa two days later.

He was on the wheelchair for a year but regained his position in the team and played in the 2010 World Cup for India.

The former hockey player and Balkaur Singh, the lone Akali Dal MLA from the state, also praised Chief Minister Manohar Lal Khattar for providing an 'honest' government to the state.

Balkaur Singh said PM Modi has been doing a lot of good work for the country.

Akali Dal, a leading party in Punjab, is a BJP ally but has in the past fought assembly polls in Haryana in alliance with the Indian National Lok Dal.

Asked about the reasons for quitting the Akali Dal, he refrained from criticising his former party but asserted that he wants to "serve" Haryana as a BJP member.

Sandeep Singh currently holds a DSP rank in the Haryana Police. The Bollywood film 'Soorma' was recently made on his life.

Haryana, along with Maharashtra, is going to the polls on October 21. The BJP is likely to name its candidates in the coming days.