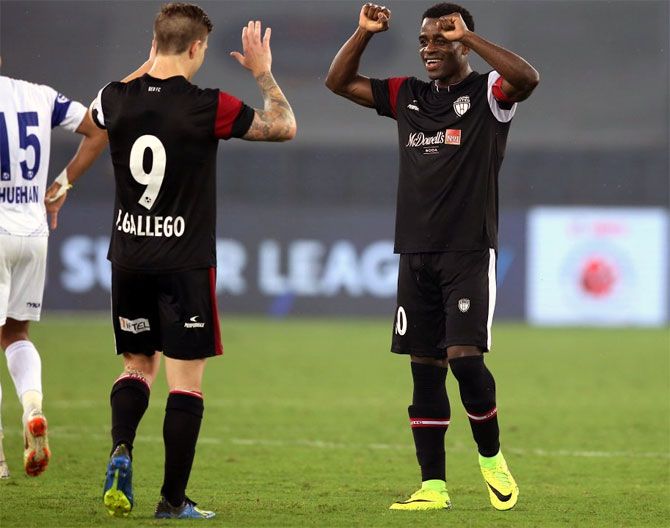 The home side failed to create enough chances to score and were outplayed by the visitors who, however, could not find a breakthrough until the 82nd minute at the Jawaharlal Nehru Stadium.

A moment of individual brilliance from Federico Gallego (82nd minute) and a clinical strike by Bartholomew Ogbeche (90th) helped NorthEast United climb to the top of the table with 11 points, although they have played a match more than FC Goa (10 points).

This was NorthEast's third victory on the road and the best start they have had in the ISL.

NorthEast United spurned a golden chance to take an early lead five minutes into the match. A pacy surge forward was led by Ogbeche who played a one-two with Redeem Tlang before unleashing a dipping effort from the edge of the box. The goalkeeper stood no chance of keeping it out but luckily for him, the effort hit the crossbar.

The visitors were attacking in numbers with Tlang's exploits on the right flank pinning both Nandhakumar Sekar and Narayan Das into their own half.

Lallianzuala Chhangte's pace was put to the test when an overhit backpass placed Robert Lalthlamuana in a spot of bother in the visitor's half. The defender managed to get to the ball before the Mizo-born winger and averted a defensive catastrophe against the run of play.

Delhi could have shocked the visitors with a lead when Pritam Kotal rose highest to get a corner-kick delivery but the ball sailed over the bar.

NorthEast United had a couple more chances before the break. Rowllin Borges received Tlang's cross into the box, controlled it with a delightful touch and released a shot that was blocked by Rana Gharami.

The resulting corner-kick was aimed for Juan Mascia in the centre who flicked it to the near post where Mateo Grgic's header flying towards the net was brilliantly kept out by Dorronsoro.

Gombau responded to the visitors' onslaught by adding Vinit Rai into Delhi's midfield as the home side were struggling to keep the ball.

NorthEast's first chance after the break saw Gallego's powerful shot take a deflection off a sliding Gianni Zuiverloon and went straight into the hands of goalkeeper Francisco Dorronsoro.

At the other end, Zuiverloon stood over a free-kick outside the box on the left and swung it towards the far post for Andrija Kaludjerovic who couldn't keep his shot on target, much to the dismay of the large crowd in the stands.

The home side had their chance in the 78th minute when a long ball by Marti Crespi fell perfectly for Kaludjerovic at the edge of the box. The striker played a one-two with Marcos Tebar whose well-weighted through-ball had Kaludjerovic attempt a shot which was blocked and deflected wide by a sliding Mato Grgic.

NorthEast United finally got their goal through a moment of brilliance from Gallego. The Uruguayan midfielder picked up the ball from the left flank, skipped past his marker, surged into the box before sending a stunning finish into the bottom right corner.

Romeo Fernandes' poor pass back to Pritam Kotal was intercepted by Gallego who charged down the left flank and squared the ball to Ogbeche. The Nigerian forward sent the ball into the net to complete NorthEast United's masterclass in Delhi.