IMAGE: Joelle Bekhazi (left) of Canada's Waterpolo team takes a picture of her teammate Monika Eggens in front of the Olympic Rings at the Olympic Village at the Tokyo 2020 Olympic Games. Photograph: Alexander Hassenstein/Getty Images

At boxing, it was drum-wielding Uzbeks. At table tennis, flag-waving Chinese cheered so much that Japanese media complained it felt like an away match for the home team.

The Olympics may officially be without supporters but at venues across Tokyo national delegations have brought the noise, replacing fans kept out by coronavirus countermeasures.

Technically, cheering is not allowed because of the risk of COVID-19 infection, but the rule has been difficult to enforce during the high drama of Olympic competition.

Mongolian coaches pounded on plastic bleachers seats as their women's team faced off in 3x3 basketball at the Aomi Urban Sports Park in Tokyo.

One of the coaches, Tugsjargal Sambuu, said they were cheering on behalf of all the fans who could not attend.

"Many Mongolians live in Japan. They really want to cheer our teams," Sambuu said.

"We have so many fans in Tokyo, but spectators are not allowed."

Russian gymnast Lilia Akhaimova said she and her team mates did their best to make up for the absent fans.

"Honestly, we didn't really pay much attention to that because we cheered each other on, we shouted at one another," the 24-year-old told reporters.

Chinese supporters have been visible and vocal.

At the 3x3 basketball, they have waved flags and chanted when opposite teams attempted free throws.

At Monday's table tennis there were dozens of Chinese supporters on hand as the long-invincible pair of Xu Xin and Liu Shiwen were upset by Jun Mizutani and Mima Ito.

At one intense moment, a Chinese supporter walked to the front row of the media zone and began shouting Xu and Liu's names, leading the cheers.

Japanese coach Yosuke Kurashima said the team were used to the thunderous cheering from Chinese fans.

"We are usually surrounded by thousands and tens of thousands of spectators, and the Chinese supporters drown out our side. So we didn't worry at all about the Chinese cheers. Rather, we tried to make sure their cheering didn't beat ours."

Inside the Tokyo Aquatics Centre on Tuesday, divers emerged from the water to cheers from teammates, coaches and officials. Members of the Canadian team gathered in the front row wearing red shirts with white maple leaves.

"It does make a world of difference," said American Jessica Parratto after picking up a silver medal with teammate Delaney Schnell.

"We know that Team USA always cheers super loud and are super obnoxious and we love that."

After being delayed by a year, the Tokyo Games have gone ahead without spectators, an unprecedented measure designed to avoid a superspreader event and reassure a nervous Japanese public that opposed holding the Olympics during the pandemic.

German gymnast Sarah Voss said she was used to competing without spectators after having preparations and qualifications without a crowd.

"I think we had a big family, a big crowd at home that cheered for us and we cheered for ourselves," she said.

Images shared on social media showed crowds, large and small, coming together around the world to celebrate Olympians.

In Hong Kong, hundreds of people appeared to gather in a shopping mall to watch fencer Cheung Ka Long receive his medal.

But at the Nippon Budokan in Tokyo, where the judo is being held, one official told Reuters he was getting weary of people asking to be let into the stands.

"The ones who keep asking us to let them into the stands are the media and the people affiliated with the Olympics," the official said, declining to be identified.

"It's getting to be a problem."

© Copyright 2021 Reuters Limited. All rights reserved. Republication or redistribution of Reuters content, including by framing or similar means, is expressly prohibited without the prior written consent of Reuters. Reuters shall not be liable for any errors or delays in the content, or for any actions taken in reliance thereon.
Related News: Tokyo Aquatics Centre, Liu Shiwen, Tugsjargal Sambuu, NBC, Lilia Akhaimova
COMMENT
Print this article 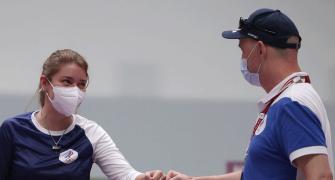 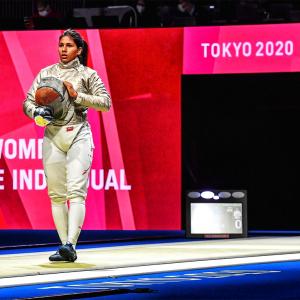