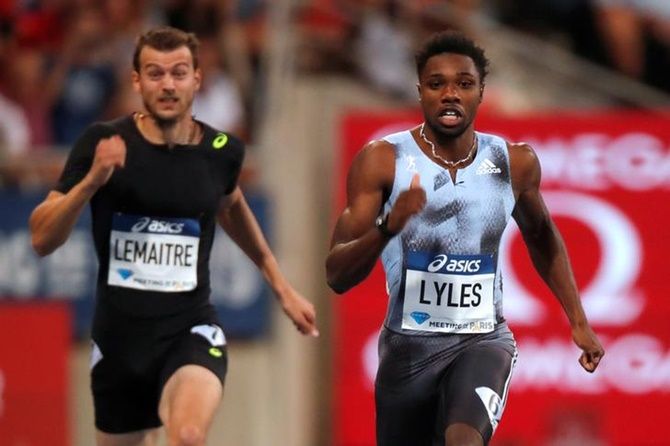 World championship favourite Noah Lyles stormed to the year's second fastest 200 metres, 19.65 seconds, as he returned to competition at the Paris Diamond League meeting on Saturday.

Reigning World champion Ramil Guliyev of Turkey was more than three-tenths of a second adrift in 20.01 and Canadian Aaron Brown finished third in 20.13.

"When I was coming off the turn it felt like such a fast track, the fastest I've ever felt coming off the turn," said 22-year-old American Lyles, who was running for the first time since winning the 200 at July's US championships.

"I'm coming off a loaded week in training so that gives me a lot of confidence," Lyles said.

"I blinked and all of a sudden the race was over."

Only Lyles has run faster this year, his time of 19.50 seconds in July making him the fourth fastest man ever at the distance.

Lyles was asked whether he was thinking about Jamaican Usain Bolt's 2009 world record of 19.19 seconds as he heads into next month's world championships.

"It's not about going after Bolt's record or anything like that," Lyles said. "But when we get there, we're willing to go after any record."

Double Olympic champion Elaine Thompson again showed she is the class of the women's 100 metres, breaking away for an easy victory in 10.98 seconds.

Norwegian Warholm won the 400 metres hurdles by more than a second in 47.26 and New Zealand's Walsh claimed the shot put with a throw of 22.44 metres as for the first time ever eight men went over 21 metres.

Olympic and World triple jump champion Christian Taylor was beaten by the silver medallist Will Claye, who bounded 18.06 metres to Taylor's 17.82.

World decathlon record holder Kevin Mayer excited the home crowd by winning a triathlon, setting personal bests of 17.08 metres in the shot put and 13.55 seconds in the 110 metres hurdles.