‘Everyone in India is expecting Dipa to create history in Rio’

‘Because Dipa won the vault gold in the Rio test event in April, the entire country thinks she will come back home with a medal’ When Bisweshwar Nandi caught his first glimpse of the Olympic rings after touching down in Rio with his gymnastics protege Dipa Karmakar, he felt an instant surge of adrenaline.

Within seconds though, that excitement was replaced with shivers down his spine as he realized that his star pupil is shouldering the hopes of a billion people.

"I am under so much pressure. Everyone in India is expecting Dipa to create history in Rio," Nandi said in an interview after he watched Karmakar soar into the air as she practiced her trademark vault in the Rio Olympic Arena.

"I feel that we are carrying the dreams of a billion Indians who just cannot understand how difficult it is for Dipa to get a medal here," he said.

"Because Dipa won the vault gold in the Rio test event in April, the entire country thinks she will come back home with a medal."

That test event proved to be the making of Karmakar.

After missing out on automatic Olympic qualification by just 0.4 of a point at last year's Glasgow world championships, she made India take notice when she showed off her full repertoire of acrobatic skills in the test event to become the first Indian female gymnast to qualify for the Games. 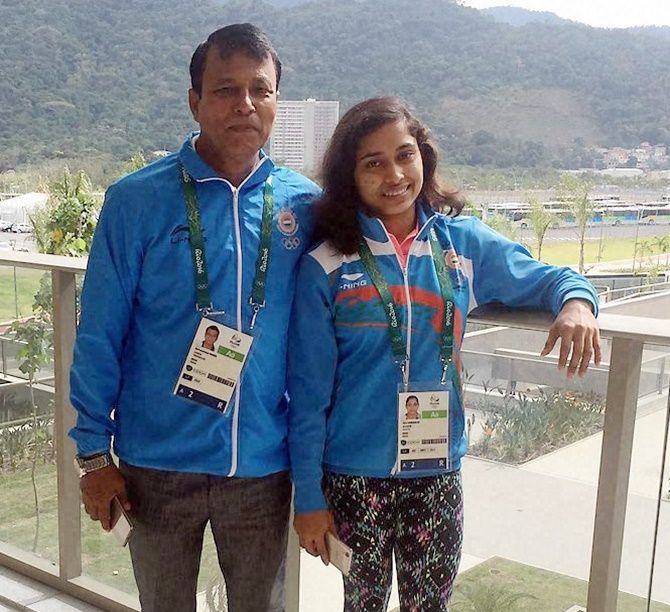 IMAGE:  Indian gymnast Dipa Karmakar and her coach on arrival in Rio de Janeiro for the Olympics. Photograph: PTI.

But in a sport where a toe-length hop forward on landing or a slight bent knee can scupper medal hopes, Nandi knows the margins between success and failure can be paper thin.

"What people in India don’t understand is that the four girls who finished ahead of her at last year’s world championships were not at the test event because they had already qualified for the Olympics," added the coach whose own gymnastic dreams stalled with appearances in the Asian and Commonwealth Games in the 1970s.

"This is really giving me sleepless nights because medals can disappear by 0.001 of a point. There is just so much hope and expectation in India, I just don’t know how to deal with all this heavy burden."
Nandi is no stranger to overcoming impossible obstacles in a country where cricketers are gods and gymnasts are, well, nobodies.

With no apparatus or money available, Nandi utilized his own DIY skills to build some apparatus for Karmakar when she first started out. That involved constructing a springboard from second-hand parts of a discarded scooter and stacking several crash mats on top of each other to make a vault.

Add in the abuse he got in India's conservative society for dedicating so many hours each day to fulfill the dreams of a young girl, and life was not easy.

"Even though I never succeeded as an athlete in the international arena, I had a dream that I would succeed as a coach on the big stage," said Nandi.

"I used to coach boys before and then Dipa came my way. In India, there are a lot of hurdles and complications when a man coaches a woman," he said.

"I’ve had to tolerate a lot of rubbish. There were so many ridiculous rumors but I knew that if Dipa produced the kind of results I knew she was capable of, that would silence everyone."

His vision for Karmakar was not just a pipe dream. Karmakar followed up winning a bronze medal in the 2014 Glasgow Commonwealth Games by becoming the first Indian to reach an apparatus final at the world championships in 2015.

"Some people were so jealous of Dipa, they would not give her any access to the apparatus during her training sessions," he said.

"They did not want her to succeed. We’ve had to survive battles on so many fronts to get her to where she is."

Despite her rather primitive start in the sport, she will be the only gymnast attempting the daring Produnova vault in Rio.

It is a skill so difficult - consisting of a front handspring and two front somersaults - that Karmakar is one of only five women to have landed it in competition.

After toiling away with little recognition for 17 years, Karmakar admitted she "cannot wait for Aug 7 to come around" as by then she will know if she has qualified for the vault final.

"A few months ago I barely got any attention in India and now it seems that as far as India is concerned, these Olympics are all about Dipa," said the 22-year-old.

"However, I feel no pressure because if I can just produce what I have trained for all these years, I will be happy. More than anything, I am delighted that Indians now know what gymnastics is all about."

© Copyright 2022 Reuters Limited. All rights reserved. Republication or redistribution of Reuters content, including by framing or similar means, is expressly prohibited without the prior written consent of Reuters. Reuters shall not be liable for any errors or delays in the content, or for any actions taken in reliance thereon.
Related News: Dipa Karmakar, Bisweshwar Nandi, India, Rio de Janeiro, PTI
COMMENT
Print this article 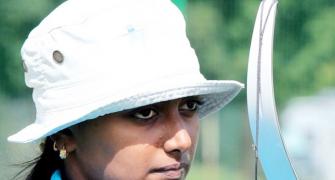 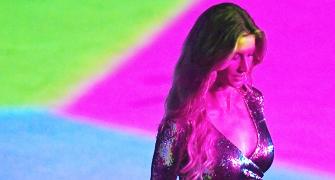 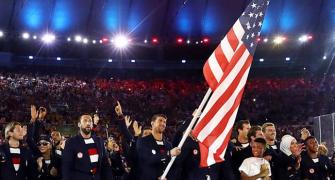 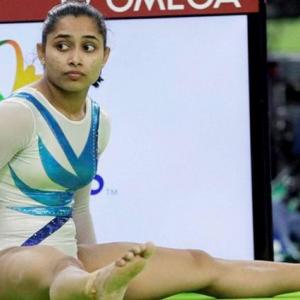