In a show of defiance against Hockey India, almost the entire Indian team that took part in the recent Asian and Commonwealth Games has signed up for the million-dollar prize money World Series Hockey (League) that was launched on Tuesday by Nimbus Sport and Indian Hockey Federation.

Among those who signed up for the League were Indian captain Rajpal Singh, penalty corner specialist Sandeep Singh and star defender Sardar Singh with each of whom expected to rake in between Rs 40-50 lakh annually by playing in the first edition of the tournament to be held between November 2011 and February 2012.

Shivendra Singh, Arjun Halappa, Gurbaj Singh, Adrian D'Souza, Bharat Chetri, V S Vinaya, Bharat Chikara, Prabodh Tirkey and Tushar Khandekar are among others to sign up for the lucrative league that is to see between 8-10 franchise owned teams taking part.

Nimbus chairman Harish Thawani challenged HI's secretary-general Narender Batra for threatening to ban the players who take part in the League from representing the country in future assignments.

"I don't know whether Mr Batra has said it or not, but if he had said it I am willing to fight it in court. There is a thing called restraint of trade," said Thawani.

"What is Hockey India. It is just on paper. Anyway the matter is in the Supreme Court. IHF is recognised by the government. It is the body which has in its hold all hockey infrastructure," he said.

"We would be offering prize money of more than $1 million initially and a top Indian player can take home between Rs 40 and 50 lakh through fees, endorsements etc," he said.

Sandeep, who was present at the conference along with Sardar, Adrian, defender Dhananjay Mahadik and Gurjinder Singh junior, was also gung-ho of representing the country despite the threat of ban issued by HI.

"We have not received any instruction from Hockey India not to play in this league," said Sandeep adding "Dum honge to khelega India ke liye (If we are capable we will play for India)".

The League aims to sign up 60 top international players and all the players would be picked up by the American-style draft system.

"It will not be cattle like auction as we see in some leagues," Thawani said taking a dig at the hugely successful Indian Premier League of BCCI.

"The deal with the IHF is for 15 years and we have given a guarantee that Rs 30 crore would be paid whether the league is a success or not. The players have been signed up for three years initially," he said.

The Nimbus boss said that the league would be played in 10 cities across the country from 18 venues that have been shortlisted and already his firm has lined up sponsors and franchise owners.

"Each edition would cost Rs 125 crore all put together," he informed.

Thawani said world hockey body FIH, which has recognized only HI, cannot stop any player from Europe from playing in the newly formed league.

"As you know FIH is based in Lausanne and is governed by European laws. These players are also represented by accredited player agents," he declared.

He also said that the league will welcome players from Pakistan provided it gets green signal from the government authorities to do so.

Nimbus will also team up with IHF to organise, manage, develop, stage, market and broadcast the league to 70 countries, Thawani said.

IHF president R K Shetty brushed aside HI's threat by saying his organisation had conducted the senior nationals in Bhopal and almost all states and units had been represented.

Former IHF president and currently holding the post of advisor, K P S Gill, conceded there was some threat issue to players and teams not to take part in the Bhopal nationals "by certain interested parties".

"All the players who are playing for India now have come through the IHF conducted events," he pointed out.

It was learnt that the players would be slotted in the salary range of Rs 5, 7 and 10 lakh by the franchise teams.

"The lowest take home money for a senior player would be between Rs 25 and 30 lakh," sources said. 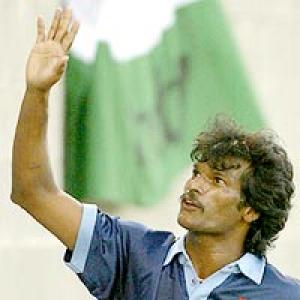