Nigeria's Okagbare gets 10-year ban for doping at Tokyo Olympics 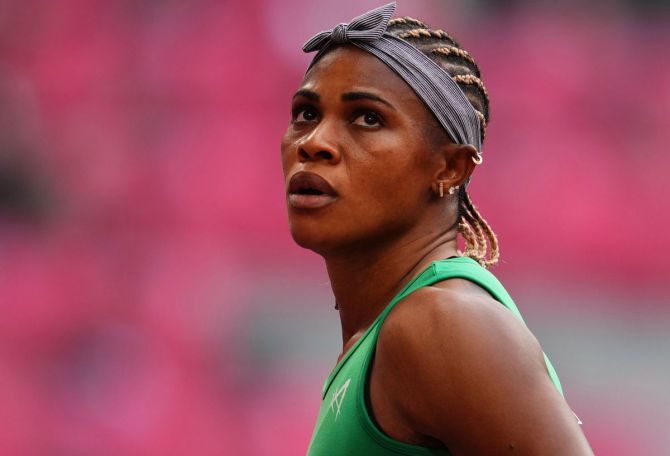 IMAGE: Blessing Okagbare, who won silver in the long jump at the Beijing 2008 Games, was provisionally suspended last year after testing positive for multiple prohibited substances before the Tokyo Olympics. Photograph: Aleksandra Szmigiel/Reuters

Nigerian sprinter Blessing Okagbare has been banned for 10 years for doping in the lead-up to the Tokyo Olympics and refusing to co-operate with the investigation, the Athletics Integrity Unit (AIU) said on Friday, effectively ending her career.

Okagbare, who won silver in the long jump at the Beijing 2008 Games, was provisionally suspended last year after testing positive for multiple prohibited substances before the Tokyo Olympics and later hit with three separate anti-doping charges.

The 33-year-old had competed in the 100m heats in Tokyo on July 31 and was due to run in the semi-final before being suspended.

"The Disciplinary Tribunal has banned Nigerian sprinter Blessing Okagbare for a total of 10 years, five years for the presence and use of multiple prohibited substances and five years for her refusal to co-operate with the AIU's investigation into her case," AIU said in a statement.

The AIU had pressed charges after her sample had traces of human growth hormone (hGH) and recombinant erythropoietin (EPO) -- which promotes the production of red blood cells to increase delivery of oxygen to the muscles and improve performance.

The AIU added she had refused to comply when she was asked to hand in her mobile phone as evidence.

However, her phone was reviewed by U.S. Customs and Border Protection on her return to the United States from Tokyo. An FBI complaint set out "highly incriminating text and voice messages" with a therapist named Eric Lira.

In January, Lira was the first to be charged by U.S. prosecutors under the Rodchenkov Anti-Doping Act for distributing performance-enhancing drugs -- including hGH -- to athletes at the Tokyo Games.

Okagbare denied the ADRVs and denied she had been in touch with Lira. She has the right to appeal against the Disciplinary Tribunal's decision at the Court of Arbitration for Sport within 30 days.

"We welcome the decision of the Disciplinary Tribunal; a ban of 10 years is a strong message against intentional and co-ordinated attempts to cheat at the very highest level of our sport," added Brett Clothier, head of the AIU.

Okagbare also won silver in the long jump at the 2013 World Championships in Moscow, while also securing a bronze in the 200m at the same event.

© Copyright 2022 Reuters Limited. All rights reserved. Republication or redistribution of Reuters content, including by framing or similar means, is expressly prohibited without the prior written consent of Reuters. Reuters shall not be liable for any errors or delays in the content, or for any actions taken in reliance thereon.
Related News: Athletics Integrity Unit, Eric Lira, Okagbare, Tokyo, Disciplinary Tribunal
COMMENT
Print this article 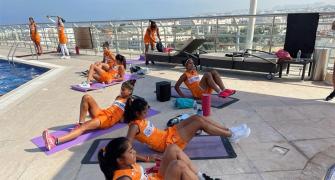 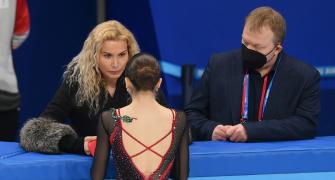 'Hope you change your mind':Adar to Djoko