Finland's Jarkko Nieminen will have the dubious honour of facing king of clay Rafael Nadal at the Monte Carlo Masters after shrugging off France's Julien Benneteau 4-6, 6-3, 7-6 in Monday's first round.

Top seed Nadal, bidding to become the first player to win the same event seven times in a row, has a bye in the opening round alongside other big names although in-form Novak Djokovic is out of this year's first claycourt tournament with a knee injury.

Nieminen will somehow try to derail Nadal, who won every clay match he played last year including at the French Open, when they take to the Monte Carlo Country Club courts in round two on Wednesday. 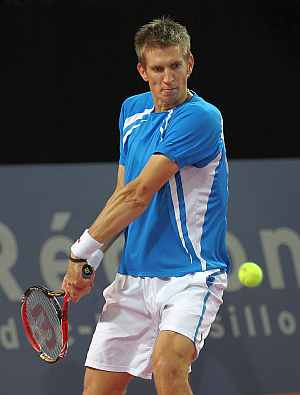 His encounter was shunted on to the Court des Princes from centre court after a women's exhibition match between Francesca Schiavone and Caroline Wozniacki ran on and the Finn won through long after the red-hot sun had fallen below the horizon.

British world number four Andy Murray, booted out in the second round of Indian Wells and the Sony Ericsson Open in his last two outings, will hope the switch to clay helps his game when he comes up against Radek Stepanek on Wednesday.