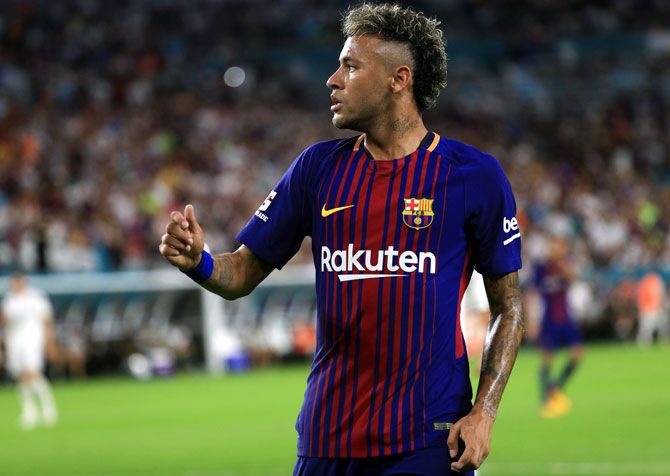 IMAGE: Neymar moved from Barcelona to PSG for a world record fee of 222 million euros in 2017 but took the La Liga side to court over the terms of the last contract he signed with them a year earlier. Photograph: Mike Ehrmann/Getty Images

Paris St Germain and Brazil forward Neymar has been ordered to pay his former club Barcelona 6.7 million euros ($7.51 million) after losing a lawsuit over an unpaid bonus, the Spanish champions said in a statement on Friday.

Neymar moved from Barca to PSG for a world record fee of 222 million euros in 2017 but took the La Liga side to court over the terms of the last contract he signed with them a year earlier, claiming he was entitled to 43.6 million euros.

"Barcelona expresses its satisfaction with the verdict announced today in relation to the lawsuit involving FC Barcelona and the player Neymar Jr regarding the amount of the signing bonus in the final renewal of the player’s contract," said the club's statement.

"The ruling has fully dismissed the player’s claim for payment of 43.6 million euros, and has accepted a large part of the defence presented by FC Barcelona, as a result of which the player must return 6.7 million euros to the club.

"Since the player’s representative is entitled to appeal this decision, the club shall continue to fervently defend its legitimate interests."

Neymar's representatives could not immediately be reached for comment.

Despite their long-running legal dispute, Barca tried to sign Neymar last year and the player even stopped training with PSG in order to try and force through the move, prompting angry protests from the French side's supporters.

The move eventually broke down, with PSG's sporting director Leonardo claiming Barca failed to meet their asking price for the forward, who formed a world-beating attacking trio with Lionel Messi and Luis Suarez between 2014 and 2017.