Relations between the White House and the correspondents who cover it, always edgy and adversarial, have hit a low ebb in a dispute over whether the press should have access to the president during his downtime.

The news media are still demanding answers for a White House decision over the weekend to bar reporters from seeing any part of President Barack Obama's Florida golf vacation, including his first-ever round with Tiger Woods.

In a formal protest, the White House Correspondents' Association cited history and tradition in arguing that the public interest is ill-served by shielding the president from the press. 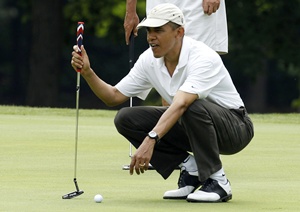 "There is a very simple but important principle we will continue to fight for today and in the days ahead: transparency," said Ed Henry, a Fox News correspondent who is president of the White House Correspondents' Association.

White House spokesman Jay Carney pushed back against questions about access during his daily news briefing on Tuesday.

Carney, a former White House correspondent for Time magazine who covered the presidencies of Democrat Bill Clinton and Republican George W. Bush, said he understood the concerns but doubted there had ever been a White House press corps completely satisfied with its access.

"We work very closely with all of you to try to provide access to the president. I would note that when I was covering President Bush, George W. Bush, I was on his first trip on Air Force One ... He came back and spoke to the pool. That was his first trip. For the next three years that I covered the president, he never came back again," Carney said.

The golf episode came as tension was already building between reporters and the White House press office about the flow of information as Obama begins his second term.

Obama has called his administration the most transparent in history, but the president himself has sharply reduced a fixture of White House press coverage, the brief question-and-answer session that reporters have used for decades to get the president's take on fast-moving daily events.

Martha Joynt Kumar, a political scientist at TowsonUniversity in Maryland who studies the presidency, said Obama held only 107 brief question-and-answer encounters with the media in his first four years, compared with 354 by George W. Bush in his first term.

Instead, Obama has relied heavily on television and print interviews, many of them with media outlets that target certain audiences. He has granted 674 interviews, mostly television.

After the White House fielded press complaints about the inaccessible Obama-Woods golf round at a private Florida club, Obama did in fact speak to reporters on Air Force One on Monday night on his return to Washington.

But he touched off more grumbling because the press office stipulated that all of Obama's comments must be considered off the record and thus not usable.

Fox News anchor Greta Van Susteren lashed out against reporters for going along with the restrictive terms, writing on her Gretawire blog: "The press caved -Pathetic!"

"The press should have said when offered OFF THE RECORD face time with the president, 'thanks but no thanks ... we will wait until the president is willing to talk to the American people since that is our job. No secret conversations,'" she said.

Previous presidents have avoided the White House press corps, some more successfully than others. The Obama White House has been less reliant than other administrations on the major media because of its whitehouse.gov website and its use of social media like Flickr and Twitter to distribute content.