Neeraj Chopra's Tokyo Olympics javelin and Lovlina Borgohain's boxing gloves hogged the limelight on day two of the third edition of the e-auction of gifts presented to Prime Minister Narendra Modi on Saturday.

The prestigious and memorable gifts presented to PM Modi for the third edition of the e-auction include sports gear and equipment presented by winners of the Tokyo Paralympics and the Tokyo Olympic Games.

The third edition of the e-auction of gifts presented to PM Modi is being held from September 17 to October 7 through the PM mementos. Other interesting artefacts include replicas of the Ayodhya Ram Mandir, Chardham, Rudraksh Convention Centre, models, sculptures, paintings, angavastras among others. The lowest-priced item is a small-sized decorative elephant for Rs. 200.

"Some of the other items like boxing gloves used by Lovlina Borgohain that are blue with strapped handles at the bottom signed by the player herself are also put for the auction," read a PIB release.

The badminton racket autographed by Krishna Nagar, Gold Medallist in Paralympics, is also in the bid.

According to PIB, proceeds from the e-auction shall go to the Namami Gange Mission aimed at conserving and rejuvenating Ganga.

According to the statement, Narendra Modi is the first-ever Prime Minister of India, who has decided to auction all the gifts he receives for a noble cause of conserving the lifeline of the country -- the river Ganges through "NamamiGange". 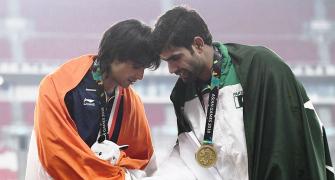