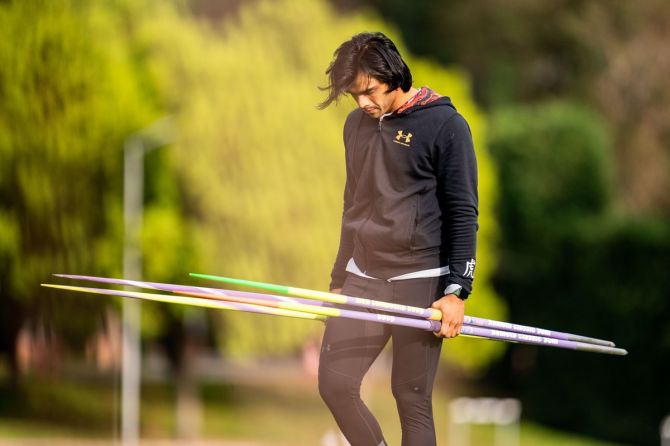 Olympic gold medallist javelin thrower Neeraj Chopra is set to switch his training base from Turkey to Finland which will host the Paavo Nurmi Games, where he will square off against Johannes Vetter on June 14.

The 24-year-old Indian, who is currently training at Turkey's Gloria Sports Arena, is scheduled to fly out on Thursday to train in Finland's Kuortane Olympic Training Centre till June 22.

The Sports Authority of India (SAI) said the "four-week training camp has been sanctioned by the government's Target Olympic Podium Scheme (TOPS) and would cost the sport ministry Rs 9.8 lakhs approximately."

"From Kuortane, Neeraj will then head out to Turku to participate in the Paavo Nurmi Games, followed by Kuortane Games and then Diamond League in Stockholm," SAI said in a release.

"The finance would be used towards expenditure for Neeraj and his coach Klaus Bartonietz's travel, accommodation, training, local travel, and daily out-of-pocket allowance among other expenditures."

Neeraj, who has a personal best of 88.07m and won gold in Tokyo Olympics with a throw of 87.58m, will be taking the field for the first time in 10 months when he competes at the Paavo Nurmi Games, which the one of the biggest track and field events outside the Diamond League.

His next event will be on June 18 at Kuortane Games in Finland where he had finished third last year.

He is planning to feature in the top-flight Diamond League Meeting in Stockholm on June 30 before heading for the July 15-24 World Championships in Eugene, USA.